These days, few high-end audio manufacturers produce inexpensive electronics. Some audiophiles might consider inexpensive a component that costs less than $1000 USD, but I'm talking about really inexpensive components -- models that cost under $500. A few years ago, it wasn't that difficult to find good integrated amplifiers and CD players in the $300-$400 range, and a quality pair of bookshelf speakers for considerably less than $300. This made it relatively easy for budget-minded audiophiles to piece together entry-level systems for around $1000. Prices have understandably crept up over the years, but many manufacturers have simply abandoned the entry-level audio market.

One company that still makes audiophile products in this price range is Cambridge Audio. Their current Azur line, and many of their earlier products, have for years provided frugal audiophiles with high-quality electronics at reasonable prices. Recently, Cambridge introduced a new value line, dubbed Topaz, and a couple of compact lifestyle systems, but the Azur models remain the backbone of their catalog. They've now expanded the line with some relatively expensive models, such as the 800-series amplifiers and CD player, but most Azurs still cost well under $1000. The subject of this review is the least-expensive Azur integrated amplifier, the 350A ($499).

Cambridge Audio's Azur 350A may be an entry-level integrated amplifier, but I was impressed by its solid construction and high level of fit and finish. Its most prominent physical feature is an attractive faceplate of thick, brushed aluminum; except for some of the smaller buttons, there's a refreshing lack of plastic. This, plus the flush edges, rounded corners, and attractive silver finish (it's also available in traditional black), make the 350A look more like something that costs $1000.

The front panel is dominated by a large, central Volume knob flanked by Bass, Treble and Balance knobs. For purists such as myself, there is a Direct switch to bypass these controls. To the right are direct-access buttons for each of the five inputs and the tape loop, and to the left are a 1/4" headphone output, a 1/8" MP3 player input, and buttons for power and activating a second set of speaker outputs. The 350A is a sizable 16.9"W x 3.4"H x 13.4"D and weighs 13.2 pounds.

Around back are the five line-level inputs, two sets of speaker binding posts, and an inlet for the removable IEC power cord. There is no preamp output, nor is there an input with a home-theater bypass mode for use with a multichannel system. This is not unexpected for such a budget component, but I wish more manufacturers would at least include a method to integrate their two-channel products into multichannel systems.

The 350A is claimed to output 45Wpc RMS into an 8-ohm load, and has a sizable toroidal transformer. The volume is controlled by a black-box, film-type volume potentiometer made by Alps that's said by Cambridge to have excellent channel balance, particularly at low volume levels. Cambridge has also included an improved version of their Cambridge Audio Protection 5 (CAP5) circuitry. According to John Bevier of Audio Plus Services, Cambridge's North American distributor, the new CAP5 sounds more transparent than the previous version, but still protects the amp from clipping, short circuits, and overheating. The amplifier is cooled by centrally located vented heatsinks.

The slim remote control is easy to hold and quite heavy, with a metal top plate that gives it the look and feel of a remote fit for a much more expensive component. Still, its buttons are relatively small, nearly identical in appearance, and thus not readily identifiable. Thankfully, the most important function, the volume, is controlled by a larger, four-way button at the center of the top plate. A disadvantage is that the 350A's power can't be switched on or off via the remote, but only with the main switch on the front panel. There is no standby mode. This means that the 350A should draw no current at all when powered down, which is more energy-efficient than a component left in standby mode. 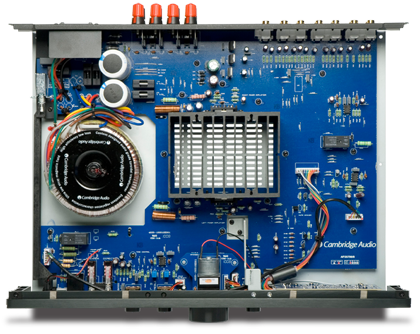 I began by listening to the Cambridge Audio Azur 350A in a real-world system comprising an Oppo DV-970HD DVD player, Paradigm Cinema 330 or Athena AS-B1 speakers, and Audio Magic Xstream interconnect, speaker, and power cables. I was rewarded with an involving and balanced sound. Considering the 350A's reasonable price, I was more than impressed by how it acquitted itself with a wide range of source material and the quite dissimilar speaker systems I had on hand.

The Athena AS-B1 is a mid-sized, budget bookshelf design that is solidly built, goes quite deep, and plays surprisingly loud for its size. It sounds clean and clear even at high volumes, and was an absolute steal when available a few years ago for under $200/pair. Not only did the Azur 350A play quite loud and low through the Athenas, but its nicely balanced sound provided a lot of low-level detail and clarity through the mid- and upper frequencies.

Taylor Swift's second album, Fearless (CD, Universal 8843930001378), is decent-sounding pop. Swift is nicely recorded here, and her close-miked voice in "White Horse" had a detailed but natural quality through the 350A that flowed with ease and was placed firmly in the center of the soundstage. The 350A also did an excellent job of reproducing the sparse acoustic arrangement. The guitar was most prominent, nicely backed up by the piano, and the cello sounded so wonderfully rich and deep that I might have thought it was a bass.

Doug Schneider recently recommended to me Neil Young's latest album, Le Noise, produced by Daniel Lanois (CD, Reprise 25956). Although Young has a more contemplative style these days, he's still producing relevant music after all these years. The 350A reproduced the couple of acoustic tracks on Le Noise with a wide soundstage and a delicacy in the voices that enhanced the songs' unhurried narratives. The rest of the album is dominated by deliberately distorted electric guitar. Young's falsetto sounded ethereal on "Someone's Gonna Rescue You," but the snarling guitar really jumped out at me and grabbed my attention. The 350A may have a modest power rating, but it reproduced this track with plenty of slam and good control.

Swapping out the Athena AS-B1s for the Paradigm Cinema 330s resulted in a more refined sound, even if it was lacking some bass in comparison. Though each Cinema 330 has five drivers -- a tweeter, and pairs of 4.5" midrange and 4.5" bass drivers -- they're housed in a relatively slim, sealed enclosure designed to be hung on a wall. The pluck of each guitar string in Swift's "White Horse" was more distinct through the Paradigms, and all of the acoustic instruments -- guitar, cello, piano -- were a little clearer, with a more defined space between them. That the Cinema 330 is a more neutral speaker than the AS-B1 was readily apparent with the Azur 350A -- through the Paradigms I could easily hear a slight sibilance in Swift's voice that the Athenas mostly glossed over.

One of my reference tracks for low-level detail is the 24-bit/96kHz live version of "Heart of Gold" from Neil Young's North Country, included in Neil Young Archives Vol.1: 1963-1972 (DVD, Warner/Reprise 075993999662). With the Azur 350A, the sounds of the crowd and Young's rambling introduction to the song were remarkably lifelike. His acoustic guitar had a naturally woody sound, and his harmonica was realistically piercing without sounding harsh. In "The Needle and the Damage Done," Young's quavering voice clearly conveyed the urgency and emotion of the words, and his guitar was absolutely captivating, the steely sound of the strings brilliantly contrasted with the warm resonance of the body. And while the guitar seemed larger than life, it didn't sound artificial.

No one will ever mistake the sound of the Azur 350A integrated for that of expensive, high-quality separates, but it proved a capable performer even when connected to a pair of Paradigm Reference Signature S6 v.3 speakers costing many times its price. Neil Young's Le Noise blasted out of the S6 v.3s with great authority, the growling guitar riffs filling my room as the 350A held their lengthy sustain. The acoustic guitar on "Love and War" went particularly deep, and was nicely controlled by the Azur. Not surprisingly, the 350A lacked the ultimate refinement and absolute control of more powerful separates, but it did an admirable job of driving these comparatively expensive speakers.

I've been using a Trends Audio PA-10 SE preamplifier ($265) and TA-10.2P SE power amplifier ($199) in my real-world system for some time, and it made for an interesting comparison to the Cambridge Audio Azur 350A ($499). Although priced similarly, these products could not be much more different from each other. The Azur 350A is a relatively conventional solid-state integrated amp, while the micro-sized Trends are a tubed preamp and a Tripath-based switching power amplifier rated to output only 10Wpc into 8 ohms. The minimalist Trends preamp has only two sets of inputs and no remote.

Part of what makes the Trends combo so appealing is that the sound of the PA-10 SE preamp can be tailored to the user's preference by experimenting with various tubes. I found the stock Russian 6H23N tube a bit too rich on occasion, and substituted a Tung-Sol 12AU7, which provided enough warmth, but with a fairly natural overall sound that I preferred. Still, the Trends combo remained on the warmer side of neutral, and its lower power output required some care in speaker matching. Neil Young's voice in "The Needle and the Damage Done" was sweeter and smoother, but his big, dynamic acoustic guitar lost some of its power, sounding a little smaller. The soundstage of "Love and War" was deep and dimensional through the Trends, but they couldn't play this track or others, such as "Someone's Gonna Rescue You," as loudly as I would have liked without showing signs of strain.

When I reinserted the Azur 350A in the system and cranked up "Poker Face," from Lady Gaga's The Fame Monster: Deluxe Edition (CD, Streamline/Interscope 0602527210360), the sound came alive with a pounding rhythm and deep, satisfying bass that remained tight and controlled. Through the Trends Audio components the bass sounded loose in comparison, robbing dance music of some of its impact. The warmth of the Trends combo served voices admirably, but the Azur 350A fared surprisingly well in comparison. Taylor Swift was simply exquisite in "White Horses" with the Trends components, her voice sounding full-bodied but with the sibilance ever so slightly reduced. The 350A sounded nearly as good, if not more neutral. It provided cleaner image outlines, and pushed Swift's voice slightly forward, which gave it a more tangible presence while neither highlighting nor diminishing the sibilance present in the recording.

While I enjoyed the tubey richness of the Trends Audio combo, I was won over by the Azur 350A's more transparent sound, deeper and more accurate bass, greater power, and the convenience of remote control. For those who listen at lower volumes and enjoy rolling tubes, the Trends Audio PA-10 SE and TA10.2P SE still comprise an excellent choice for $464, but the Cambridge Audio Azur 350A provides the convenience and performance of a modern, solid-state integrated amplifier at a still-attractive $499.

Though most high-end audio manufacturers may have abandoned the budget market, Cambridge Audio continues to produce many products in this category, and have imbued their entry-level Azur 350A integrated amplifier with levels of performance and quality that belie its $499 price. If you're looking for an integrated amplifier for a modest yet still audiophile-approved system, the Azur 350A is an excellent choice.