Hi-fi purists usually disdain receivers, feeling that they compromise too many functions. But it’s likely that receivers were most of those same audiophiles’ introduction to hi-fi: after all, they’re easy to buy, easy to connect, and easy to use.

In some ways, TEAC’s CR-H500NT receiver ($799 USD) does demand a few compromises. But, holy cow, it makes up for them in overall versatility. In its capabilities, it looks both back and far forward.

The CR-H500NT measures 11.5"W x 4.5"H x 13.5"D. It has a 40Wpc stereo amplifier; an AM/FM tuner and Internet Radio capability; a transport that plays CD, CD-R, and CD-RW discs; and circuits that play Windows Media and MP3 files. You can connect your iPod to it, and control it with the TEAC’s remote; and you can play and control music files stored on your PC through the receiver and remote. The CR-H500NT records to either an analog output or via a USB port, has WiFi and hardwired Ethernet connectivity, lets you connect a turntable so you can play those big, black, round things (LPs), and comes with a 55-page user’s guide to explain it all. It won’t make your coffee or butter your toast, but with all it can do, you shouldn’t miss the few things it can’t.

The CR-H500NT benefits from a lot of technology trickled down from TEAC’s very-high-end Esoteric division. According to TEAC, Esoteric supervised the component selection, power-supply design, Internet-based/LAN/streaming chipset, and testing of the CR-H500NT -- a lot of involvement for a receiver that sells for a fraction of the price of any Esoteric model.

Given the CR-H500NT’s versatility, its front panel boasts surprisingly few controls; not surprisingly, most of these few have multiple functions. A large knob at the upper right controls volume, while a matching knob at the left is labeled Multi Jog. Between these is a wide, two-line fluorescent display that could reveal a bit more information. Below the display is the disc drawer. Across the bottom of the front panel, from left to right, are the Standby/On switch, mini headphone and stereo input jacks (Aux 2 In), a full-sized USB jack, and four small buttons: Source, Menu/FM Mode, Back, FWD. To the right of these are three larger buttons: Tuning Mode/Enter, Info/RDS, and Band. On those buttons are printed symbols indicating, respectively, Open/Close, Stop, and Play/Pause.

On the rear panel, from left to right, are a three-pronged IEC jack (though the plug of the supplied power cable has but two prongs) and the wireless LAN antenna. Below the latter are connectors for the FM and AM antennas and an Ethernet port. To the right of that are input and output jacks for Aux 1, input jacks and a ground post for the phono input, a subwoofer output jack, and two pairs of speaker binding posts. Despite the CR-H500NT’s small size, nothing on either panel is cramped.

The tuner section offers presets for 30 FM and 30 AM stations -- more than enough for most areas. Also, you can store a sizable number of Internet stations in the My Added Stations section.

The metal-cased remote control is long and narrow. With it the user can access all inputs, the tone controls (bass and treble), and many source-related functions (Play, Stop, Pause, Repeat 1/All, Shuffle, Program). While the remote does offer Scroll Up/Down and Skip Back/Forth toggles for going from track to track, it lacks direct access to tuner presets, or individual tracks on CDs and iPod files. It gets a bit tedious schlepping through a 25-track disc to get to track 21, or to manually tune from, say, 88.1 to 94.9MHz, but adding direct access would have meant an even larger remote.

The CR-H500NT’s amplifier is rated at 40Wpc into 6 ohms with 0.5% THD at 1kHz, making it an option for a main system in an apartment or living room of modest size (such as mine). The phono input is a fairly standard 2.5mV with 47k ohms loading. 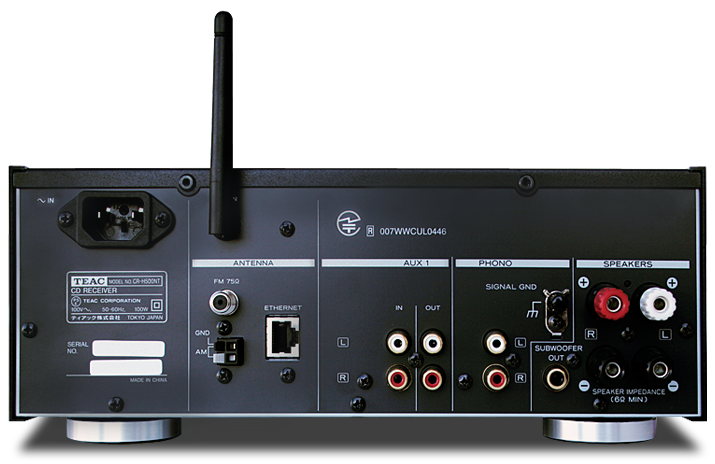 The CR-H500NT has so many capabilities that it was difficult to know where to begin. I started with the sources I use most often.

The FM tuner is unfancy but competent, especially for urban and suburban areas. I compared its performance to that of the Sangean HDT-1X AM/FM/HD tuner, using the same antenna (I’ve found a BIC FM-10 Beam Box to be the best indoor FM antenna for my purposes) during the same listening session (weather conditions greatly affect FM reception). While the Sangean received 36 stations in listening-quality (nonnoisy) stereo, the TEAC picked up 20 of those in stereo, but would also gather in the other 16 if switched to Mono/No Muting mode. Unless you regularly listen to a station more than 30 miles away, the CR-H500NT should serve nicely. Its tuner offered a more robust, more full-bodied sound than the Sangean, with excellent bass and treble extension. Both tuners sounded good; which you prefer will depend on your taste. My one disappointment: The CR-H500NT doesn’t include HD Radio, even though TEAC has licensed the technology. (They make a very slick HD clock radio and iPod dock.)

The CD player is a honey, with a sweeter sound than my NAD C 525BEE player that was quite appealing. Playing one of my favorite reference tracks, Fourplay’s "Bali Run," from Fourplay (Warner Bros. 26656-2), the CR-H500NT turned in a solid performance, with prodigious, well-articulated bass, and real slam on the kick drum. Every instrument sounded taut, as I believe they should in this track. The soundstage was broad but not especially deep. Another beautifully produced recording that the TEAC’s CD player showed off to good advantage is "Goodbye to Love," from the Carpenters’ Gold (A&M B0001777-02). The receiver set up a fabulous soundstage -- broad, deep, and multilayered -- just as I believe Richard Carpenter wanted it. Karen Carpenter is out front, close to the microphone, while the talented "Wrecking Crew" of instrumentalists is to her side and back. Although its error correction was just average (it played only to track 2 of my CD-Check test CD, which is equivalent to a 0.375mm scratch on the disc), I had no trouble playing any clean CD, commercial or ripped.

I ran a number of favorite LP cuts through the CR-H500NT via my Dual CS-5000 turntable. Perhaps the most revealing was a recording by pianist Lazar Berman, of Mussorgsky’s Pictures at an Exhibition (Deutsche Grammophon 2351 096). The TEAC gave this, too, a rather lush rendition, very slightly favoring the lower mids without cheating the top or the bottom. Dynamics, of which this piece has loads, were well served: pianissimi were in no way affected by circuit noise, and fortissimi didn’t sound the least bit compressed or distorted. Did it offer quite the depth of LP performance offered by my Linn Majik 1p integrated amplifier? No. But this entire CD receiver costs less than the Linn did in 1996. I could live with the TEAC for use with my turntable and not feel at all cheated.

The real joy for me was the Internet Radio feature; it was loads of fun. Once I got the right key word into the wireless setup menu, the system worked seamlessly. (That interface could use some improvement.) Repeatedly pressing the Band button on the CR-H500NT’s front (or Tuner on the remote) cycles through FM, AM, and Internet. The Internet feature takes a few seconds to come up, and will start at the last station you were listening to. A press of the Menu button gives you a list of options: stations by Location, Name, or Genre; a list of local stations; stations you’ve loaded into My Favorites or My Added Stations; or podcasts from a list. Select Location and the display offers a list of continents. Choose a continent and you’re given a list of countries. Select, say, United States, and you’re given a list of states. Choose a state and there appears an alphabetical list of all stations in that state, both broadcast and Internet-only. Some 30 Genres are listed, everything from Ambient to more mainstream choices such as Oldies, Pop, and Jazz.

Quickly, I learned that not all IR datastreams are created equal. There are some beauts -- Classic FM from London, UK, streams at 128kbps, and its signal offers full-bodied, extended sound. But my favorite oldies station, WLNG from Sag Harbor, New York, streams at 32kbps in mono -- it sounds about like an AM radio. One of the best-sounding streams I heard was that of my hometown classical station, Cincinnati, Ohio’s WGUC FM. For background music, I recommend Jazz24.org, the HD-2 channel of Tacoma, Washington’s great jazz and NPR station, KPLU. The stream is only 32kbps, so the sound is a bit contracted -- but there’s nothing wrong with the tunes it plays.

Then I tried the USB input, loading a 4GB flash drive with numerous cuts by Diana Krall and Mel Tormé. The CR-H500NT found and played them all flawlessly. However, I discovered that it won’t document more than 20 cuts. I also downloaded a few tracks from high-quality streams to the flash drive. The process was simple, and the results sounded quite good.

At last, it was time to sync the CR-H500NT with my computer, onto which I had ripped ten CDs from my collection. This took some fiddling, which I attribute more to the age of my version of Windows (and Windows Music Player) and my own general klutziness than to the TEAC. After about 40 minutes of mounting frustration, everything came together; I could easily call up any of the tunes and have them transferred from my PC to the receiver via WiFi. Ain’t technology great?

As already mentioned, I compared the CR-H500NT with my Linn Majik 1p integrated and Dual turntable. While the TEAC didn’t offer quite that combo’s depth of soundstage, in all other measures it acquitted itself well. Compared to the Linn plus NAD CD player, the CR-H500NT sounded just slightly sweeter and a tiny bit more full, with no hint that the sweetness was at the cost of less-than-excellent performance in any other area.

I probably could write another several hundred words about all the capabilities and performance aspects of the CR-H500NT. It’s a great piece of gear, and I don’t want to return it to TEAC. It’s incredibly versatile, compact, and fairly full-featured, with enough power to fill with excellent sound a room of moderate size. It has all the latest kit -- USB port, Internet Radio, iPod connectivity, etc. -- while looking backward as well, with a competent FM tuner and a fine-sounding phono preamp.

The CR-H500NT can serve as the foundation of a very fine stereo system, and for all it offers, it’s inexpensive. I heartily recommend it.