Taste: "What's Going On: Live at the Isle of Wight"

Irish blues guitarist Rory Gallagher was never the big star in the US that he could have been, largely because he didn’t spend much time touring here. He was as good a blues player as some of his better-known contemporaries -- so good that he was the guitarist on The London Muddy Waters Sessions, from 1972. Aside from the leader, he’s the best thing on that album.

Gallagher’s solo career had begun only the year before. Before that, he’d released three LPs with the trio he fronted, Taste. The band had been together four years when it appeared at the 1970 Isle of Wight Festival, and it was falling apart. By the end of the year it had broken up, and Gallagher was on his way to the next stage of his career. Perhaps because the band knew it was near the end, they played at full throttle -- and the crowd brought them back for three encores.

What’s Going On: Live at the Isle of Wight is a film of the band’s performance at the festival, which reportedly drew 600,000 people. Interviews with musicians and the guitarist’s brother, Daniel Gallagher, lead into the band’s performance, which lasted nearly an hour. Bob Geldof and The Edge speak of him with pride as a fellow Irishman. “Taste,” says The Edge, “had basically done the impossible: come out of Ireland and gone all the way, and played on the same stage at the Isle of Wight with Jimi Hendrix, and taken most of the world by storm.” 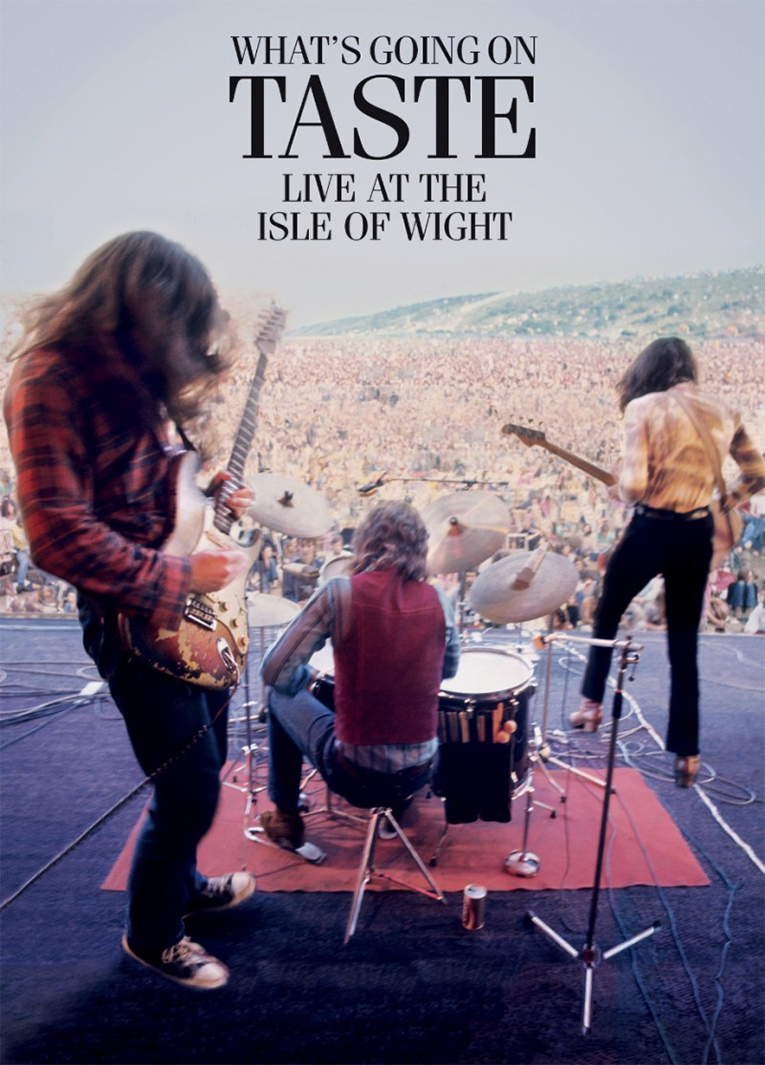 Gallagher was lucky enough to have two bandmates as good as he was. Bassist Ritchie McCracken and drummer John Wilson are right there with him as he rips into “What’s Going On,” and the three push each other forward. Their interaction throughout the performance is like Cream’s on a good night. Taste could stomp through “Catfish Blues” or “Morning Sun” with abandon, but in the improvisational sections they weave around each other, creating momentum and excitement.

Three songs from an appearance on the German TV show Beat Club, included here as bonuses, prove that Taste’s strong showing at the festival wasn’t a fluke -- the band was always a potent live act that stretched itself. In the jazzy “It’s Happened Before, It’ll Happen Again” Gallagher even picks up a saxophone for a few credible bars. Three promotional videos show the kind of visual experimentation that American viewers would only begin to see more than ten years later, when MTV debuted.

Murray Lerner’s filming of the Isle of Wight show captures not just the excitement of Taste’s performance, but the size and atmosphere of that huge festival. The documentary, which includes the Isle of Wight footage in full, is presented in 16:9. There’s also a menu option to play the concert film in its original 4:3 aspect ratio. The menu lets you skip ahead during the feature to the performance, and the images look better in 16:9. Images are sharper, and colors are more vivid.

The 4:3 version of the concert is in LPCM stereo; the feature offers that option, plus 24-bit/96kHz DTS-HD Master Audio in 5.1-channel surround. Choose the DTS, which is much more open and detailed. Gallagher’s voice is sometimes lost in LPCM stereo, but in surround his singing and all three instruments have more space to stretch out.

Watching this concert and listening to recordings by Taste, I found myself wishing Gallagher had stayed with this band. McCracken was as melodically exciting a bassist as Gallagher was a guitarist, and Wilson was a driving, inventive drummer. To watch and hear What’s Going On: Live at the Isle of Wight is to enjoy a great moment in rock history and wonder what might have been.