Sheryl Bailey: "A Meeting of Minds" 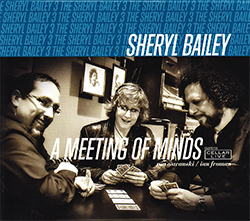 I’ve been following jazz guitarist Sheryl Bailey since I reviewed her second album, Reunion of Souls, in 2001. I’ve since reviewed three other discs by her, and wrote a feature in 2005. Bailey’s newest, A Meeting of Minds, has been out a few months, and I’m ashamed to admit that its release snuck by me -- I try to keep an eye on what’s going on with her.

With A Meeting of Minds it’s possible to list Bailey, without reservation, among the very best jazz musicians who’ve picked up the guitar, from Wes Montgomery to Emily Remler to John Scofield. A Meeting of Minds brings together all her talents -- as bandleader, composer, and guitarist -- in greater force than even her earlier, impressive recordings, such as Bull’s Eye! and The Power of 3.

A Meeting of Minds features Bailey with Ron Oswanski on Hammond B-3 and Ian Froman on drums. As Jim Carlton points out in his perceptive liner notes, the organ trio was once considered a lesser form of jazz. However, time has been kind to the recordings organists Jimmy Smith and Jimmy McGriff made with guitarists, and Bailey builds on their inspiration to write compositions that are fresh and never dated. It’s easy to hear Wes Montgomery in “Good News,” but Bailey respects tradition without going over old ground, and her own voice is unique and immediately recognizable.

“Unity” is a good example of how Bailey displays her many talents without showing off. The warm chord washes that open the tune give it harmonic backbone before Bailey introduces the striking melody, interspersed with splashes of chords that restate and build on the theme. To the memorable riff that kicks off “One for VJ” Bailey adds rich chords, and complex variations to the melody. Her accompaniment of Oswsanski is beautifully textured, and gives him great harmonic support that he builds on in his solo.

Bailey’s improvisations throughout the album are filled with long, flowing lines that are often blindingly fast but never lose sight of the tune. Oswanski’s B-3 playing is firmly grounded in the blues, and his solos are earthy and intelligently developed. Froman has accompanied Bailey on her other organ-trio discs, and his drumming is a constant delight -- he’s quick, musical, and utterly solid in his timekeeping duties. Having two musicians this good to work with gives Bailey the freedom to write great material. She knows they can handle it.

A Meeting of Minds was recorded at Tedesko Studios, and engineer Tom Tedesko and mastering engineer Paul Wickliffe have given it a warm, expansive sound reminiscent of Blue Note’s classic organ-trio sides. The recording serves the music well, giving Froman’s drums a full sound, and Oswanski’s Hammond a suitably grand feel. Bailey’s notes ring out clearly and sustain beautifully, and her rhythm-guitar sound is full and complex. With A Meeting of Minds, Sheryl Bailey establishes that she has few peers in jazz guitar. All she needs -- and deserves -- is a wider audience.