King Crimson: "Music Is Our Friend (Live in Washington and Albany, 2021)"

The current lineup of seven musicians who make up King Crimson has been touring, off and on, since 2013, with minor personnel changes. Although this version of the band hasn’t released any studio recordings, its life as a touring group has been well documented in a series of live albums released through Discipline Global Mobile, the label overseen by Crimson’s guitarist and leader, Robert Fripp. Music Is Our Friend (Live in Washington and Albany, 2021) is the latest of these releases.

The bulk of Music Is Our Friend is taken from King Crimson’s September 11 appearance at The Anthem in Washington, DC, at the close of the American leg of the band’s 2021 tour. The remaining four tracks come from a performance at The Egg, in Albany, New York, on August 22. 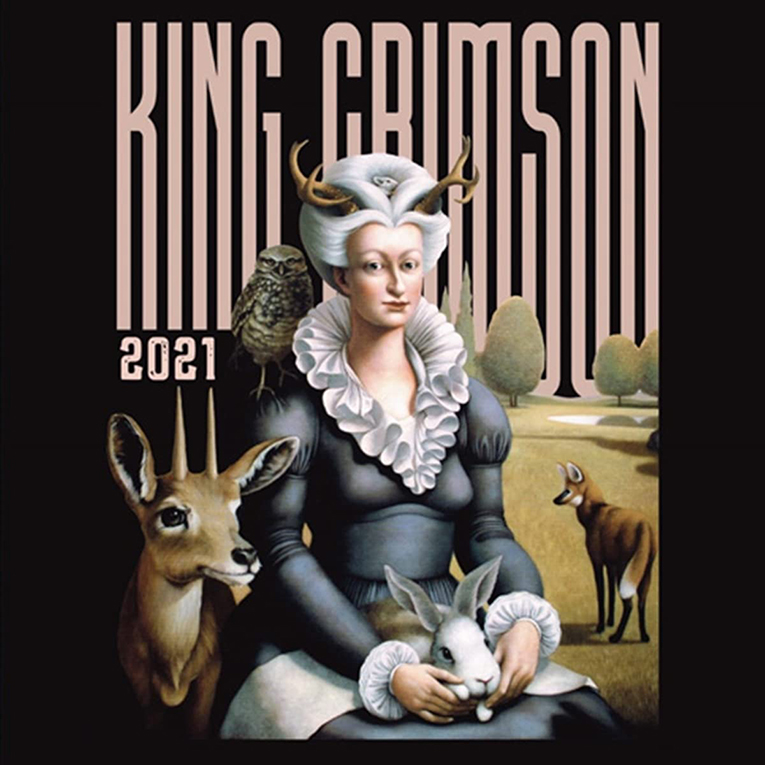 The show in DC opens with “Introductory Soundscape,” a nearly seven-minute demonstration of Fripp’s skills on the guitar synthesizer. Fripp then briefly greets the audience and the group’s three drummers begin playing their feature, “The Hell Hounds of Krim.” Pat Mastelotto, Jeremy Stacey, and Gavin Harrison are positioned at the front of the stage, and “The Hell Hounds of Krim” is a composition that shows how precise, dynamic, and musical this trio is. The combination of power and refinement sets the tone for the rest of the show.

King Crimson’s recent shows reach back more than 50 years through the band’s album catalog, and with so many songs to choose from, set lists vary. Here, the full band begins with “Larks’ Tongues in Aspic, Part I,” which features at many of its shows. The differences between this version and the 1973 studio recording on Larks’ Tongues in Aspic show a rethinking of the song while following the structure of the original composition.

Mel Collins plays sax and flute in the current iteration of King Crimson, and he also played on the original recording of “Pictures of a City,” from In the Wake of Poseidon (1970). Other early Crimson tunes on Music Is Our Friend include “The Court of the Crimson King” and “21st Century Schizoid Man.” Guitarist and singer Jakko Jakszyk sounds remarkably like original vocalist Greg Lake on those songs, and the performances remain true to the spirit of the compositions while finding new and exciting things to say. 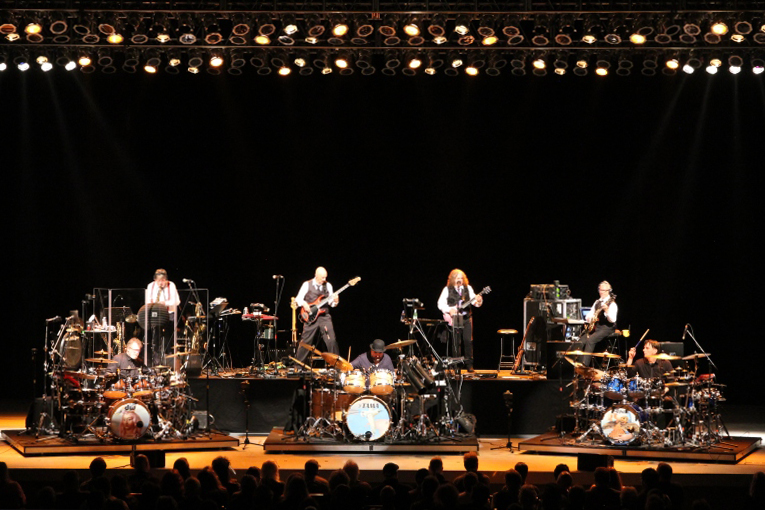 The concerts documented on Music Is Our Friend include songs from all eras of King Crimson’s music, from late-1960s recordings already mentioned to the albums of the ’70s and ’80s, when the band went through many musical changes. Tony Levin has been a constant in King Crimson since 1981, and his bass playing throughout Music Is Our Friend is a rhythmic thread that helps keep the group’s performances connected to its history while driving it to fresh creative ground. Fripp is King Crimson’s guiding intelligence, and his guitar and keyboard skills embody the balance of intellect and passion that have defined the band for more than 50 years.

Many of the songs on the album run longer than the originals, but the band’s improvisational skills and familiarity with the music ensure that things don’t get bogged down. There are even some light moments, as when Collins injects a quote from Billy Strayhorn’s “Take the ‘A’ Train” into his feature on “21st Century Schizoid Man.” 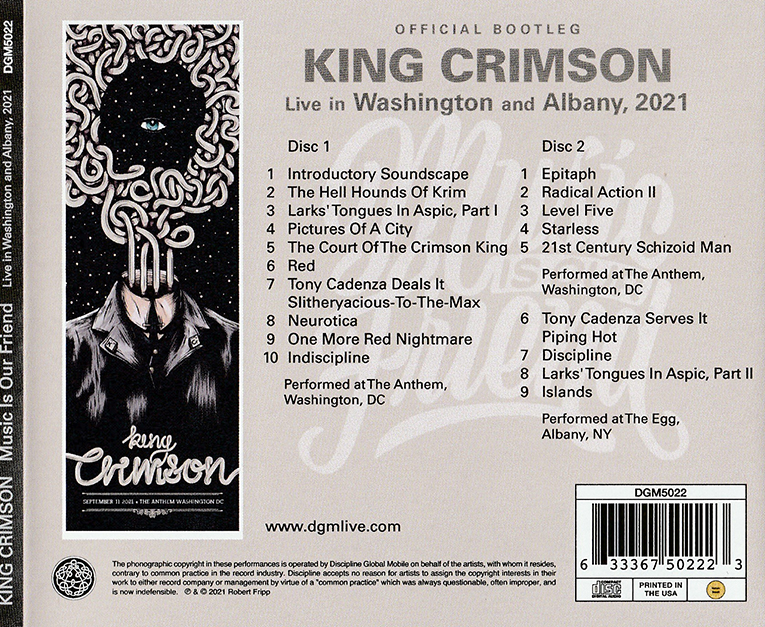 King Crimson’s manager, David Singleton, supervised the recordings for the two shows, and the often complex layers of detail came through powerfully as I listened closely. It was easy to locate each drummer, even during the busiest passages, and other instruments were clearly defined and precisely placed. I occasionally wished for a little more atmosphere, as well as a better sense of the dimensions of the performance spaces. Overall, however, I enjoyed the sound on Music Is Our Friend.

King Crimson’s live history is already well documented, but Music Is Our Friend is a worthy addition to the band’s discography. Tony Levin has said that the 2021 tour, which wrapped up in Japan in December, will likely be King Crimson’s last. The booklet that accompanies Music Is Our Friend includes entries from Robert Fripp’s diaries, the last of which reads: “my Work is beginning.” Whatever that work turns out to be, I look forward to hearing it.