The Flaming Lips’ 15th studio album, King’s Mouth: Music and Songs, is part of a larger work that includes a book and an art installation, the songs being part of a unifying narrative. The overarching concepts of Flaming Lips albums are usually more evoked than spelled out, and while the whimsical fairytale on which King’s Mouth is based helps embody the album’s themes, it’s the layers of sound in the music and Wayne Coyne’s emotionally charged singing that convey the album’s felt meaning.

The story of King’s Mouth, which Mick Jones, of the Clash and Big Audio Dynamite, narrates throughout, is as follows: A giant King is born, and his mother dies in childbirth. The King is endlessly curious about the universe, and one night, “outer space and all the associated regions . . . all descended into and became part of his giant head and mind.” Later, while saving the city from destruction by an avalanche, he dies, and the city’s inhabitants cut off his head and dip it in steel to preserve it. Because the King died with his mouth open, his people can enter his head to see the wonders of the universe.

The album begins with the brief (1:10) “We Don’t Know How and We Don’t Know Why” -- familiar Flaming Lips sounds of trippy keyboards, thumping kick drum, and swirling sound effects introduce Jones, who begins telling the story. This leads to “The Sparrow,” in which Coyne achingly sings of the pain of loss, and how we live on in the memories of those who remain behind. Sputtering keyboards, Coyne’s doctored vocal, acoustic guitars, and layers of other sounds unfold throughout the five-minutes-plus of this song, whose three interlocking sections convey a sense of childlike wonder as well as the occasional dread of life’s uncertainty.

In “Giant Baby,” gurgles and other sounds signal infancy, but the music then deepens to convey the King’s insight that “Life is sometimes sad.” The mostly instrumental “Electric Fire” creates an impressionistic picture of the King’s mind absorbing the universe in all its complexity. Massive-sounding keyboards, angelic voices singing in harmony, and a dark, distorted ending culminating in a slide whistle convey the King’s feelings of awe, fear, and amusement.

“All for the Life of the City” describes the affection the city has for its King, and his commitment to his people, which leads him to sacrifice his life for them -- though the song’s strange, magical bounciness makes the story more fanciful than tragic. The funky dance beat of “Feedaloodum Beedle Dot” mirrors the people’s oddly naïve decision to cut off the King’s head, and the martial beat and chorus of “Funeral Parade” are majestic and appropriately surreal. 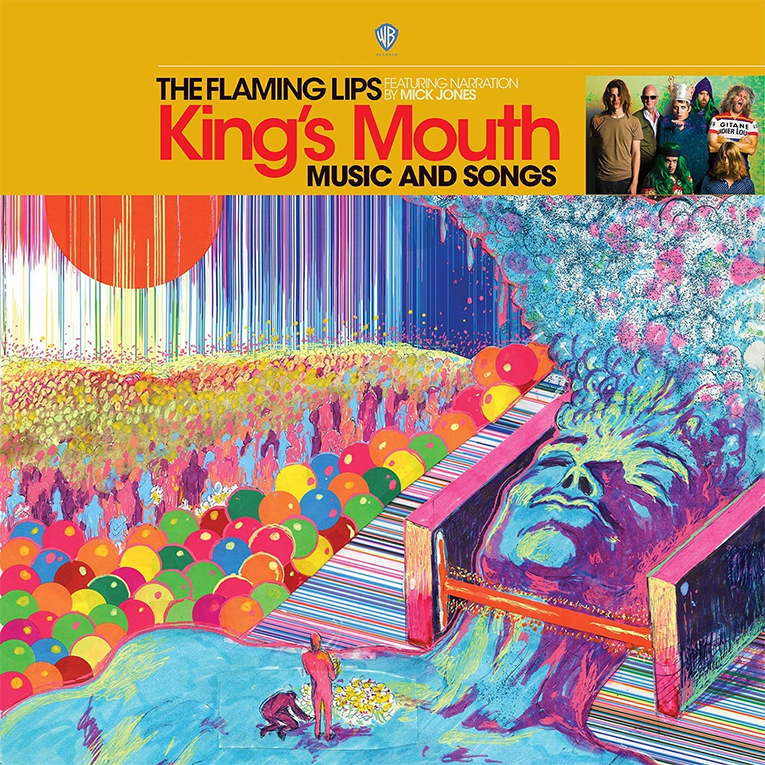 In “Mouth of the King,” the King speaks from beyond death to remind his subjects that he lives on in their memories and in their acts of love. King’s Mouth isn’t a protest album, but, like all true fairytales, it has deeper, perennially timely messages. One of these is that societies function best when the people and their leaders have a sense of shared sacrifice. It also reminds us that our acts of love and kindness can outlive us.

King’s Mouth: Music and Songs is rich in musical details -- keyboards that pan and swirl, the harmonizing voices of what seem a celestial choir, drumbeats that at times encourage you to dance. Above all, Coyne’s voice reaches out with an emotional directness and honesty that make plausible this story’s details. While some Flaming Lips albums, especially At War with the Mystics (2006) and Embryonic (2009), require and reward careful listening, King’s Mouth is immediately accessible.

That accessibility doesn’t mean that King’s Mouth is musically lightweight or doesn’t merit close attention. Its many layers of sound, well recorded by the band and producer-engineers David and Mike Fridmann, are witty and fun, and make for great listening. However, the album does feel like a step back. As difficult as the last few Flaming Lips LPs could be, they were challenging, even the tuneful Oczy Mlody (2017).

At times, King’s Mouth seems to reach back to the band’s earlier work, especially Yoshimi Battles the Pink Robots (2002). That’s an unusual step for The Flaming Lips. As much as I enjoy King’s Mouth: Music and Songs, I won’t be surprised if their next album is something bracingly different.