The Best of the 2014 Consumer Electronics Show 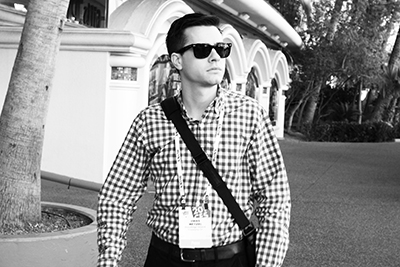 Oh Las Vegas, how I detest thee. I write this en route to Philadelphia, having just departed the 2014 Consumer Electronics Show, held annually in the Nevada city. A great many products were introduced on the Strip, many of them far more expensive than what we normally cover here on Access. I have no interest in such stuff. Some of it pushes boundaries in terms of build quality and/or performance, but most does not. Through the first several days of the SoundStage! Network’s show coverage, I kept being asked if I’d seen anything really interesting. All I could do was shrug and trudge off to yet another room filled with tens of thousands of dollars’ worth of underwhelming hardware. Few and far between were introductions of loudspeakers costing less than $10,000/pair. (All prices in USD.)

There were, however, several electronic components that I found compelling. First was NAD’s new Direct Digital M12 preamplifier-DAC ($3499) and M22 stereo power amplifier ($2499). (NAD also showed an A/V processor and a seven-channel power amp.) These may well have been my favorite products at CES -- I found a lot to like about them. Since you’ll presumably see them before you hear them, I’ll just say that their appearance and construction are sensational, and not just for the price. They were designed by David Farrage, an industrial designer from New Jersey who’s done work on several products for both NAD and PSB (both companies are owned by the Lenbrook Group) over the past five years. Farrage has also designed for Movado and Sony -- he has some serious experience, and it shows. 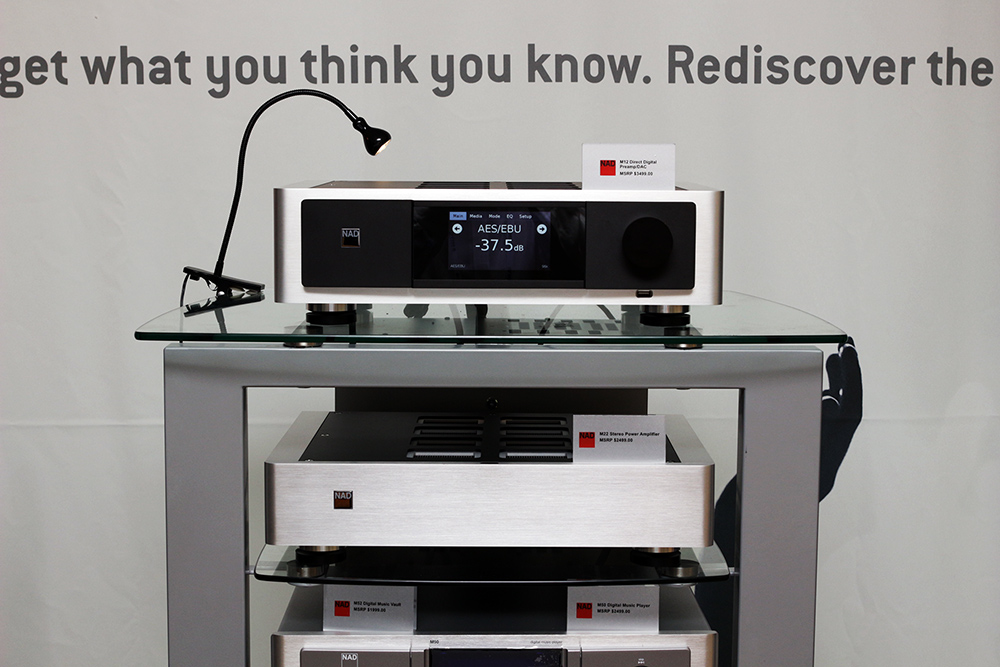 Copious amounts of aluminum are on offer on the NADs, with significant attention to detail. A case of extruded aluminum is wrapped around the chassis of each model, hidden screws holding it all together. Top-mounted vents let you peer inside each to admire the attractive architecture. The M22 amp features a top-quality, 250Wpc class-D hybrid amp from Hypex, designer of some of the best class-D available. The front panel of the M12 preamp-DAC forgoes the use of traditional pushbuttons for a prominent touchscreen, and the rear panel boasts the expected raft of analog and digital inputs and a host of outputs. More impressive is the M12’s modular design, which permits outfitting it with a phono stage, HDMI, and/or a BluOS card in one of its six module slots (the price of each card is expected to be about $450). On top of that, custom iOS and Android apps are included to manage all of the M12’s connectivity. “We wanted to appeal to more than an audiophile audience,” Lenbrook’s Mark Stone told me. “We don’t want to solely focus on 1% of the market.” Mission accomplished. Expect availability mid-year and, fingers crossed, a review on SoundStage! Access shortly thereafter. 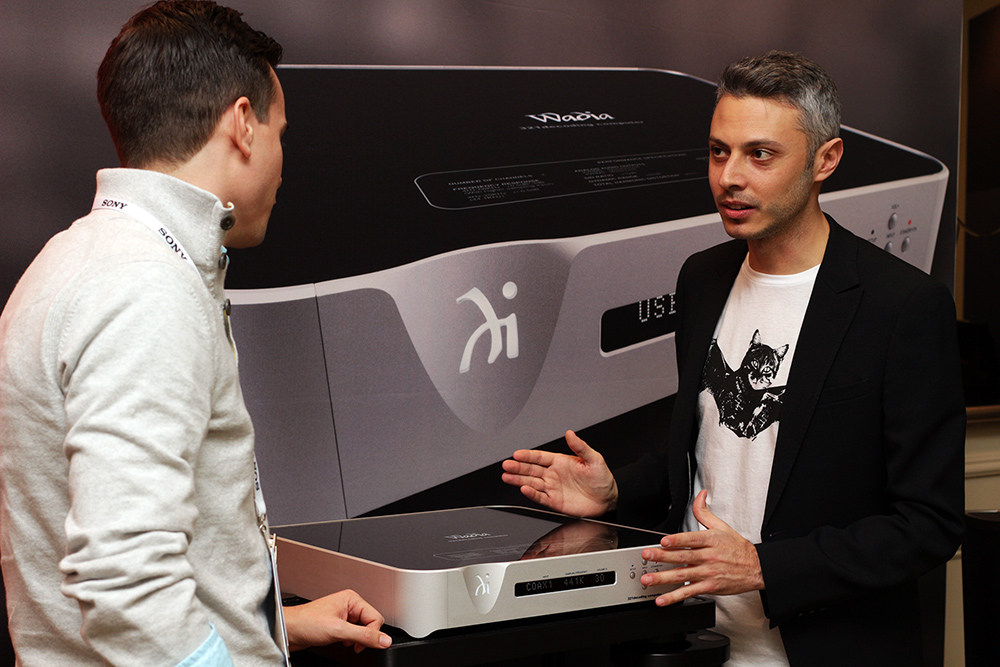 NAD was not the only company demonstrating savvy design at a reasonable price. Wadia displayed their 321 Decoding Computer, which is, in some ways, even more impressively styled and built than the NADs. It’s made entirely in Binghamton, New York, and I was dumbfounded when told it would retail for only $3000. The sides of the 321 are crafted from locally sourced extruded aluminum, with machined aluminum panels up front and around back. A glass pane covers the top panel, but this DAC feels substantial -- its beauty is not of the superficial variety. Livio Cucuzza, Wadia’s lead designer (in photo above), is of the same mind as NAD’s David Farrage. Cucuzza explained that Wadia’s goal is to remain true to its heritage of the brand while creating “objects of music, rather than objects for listening. Some people want to listen to two or three albums for the rest of their life -- which is fine. This is for people who listen to all sorts of music, and will place something like this in their living room.” 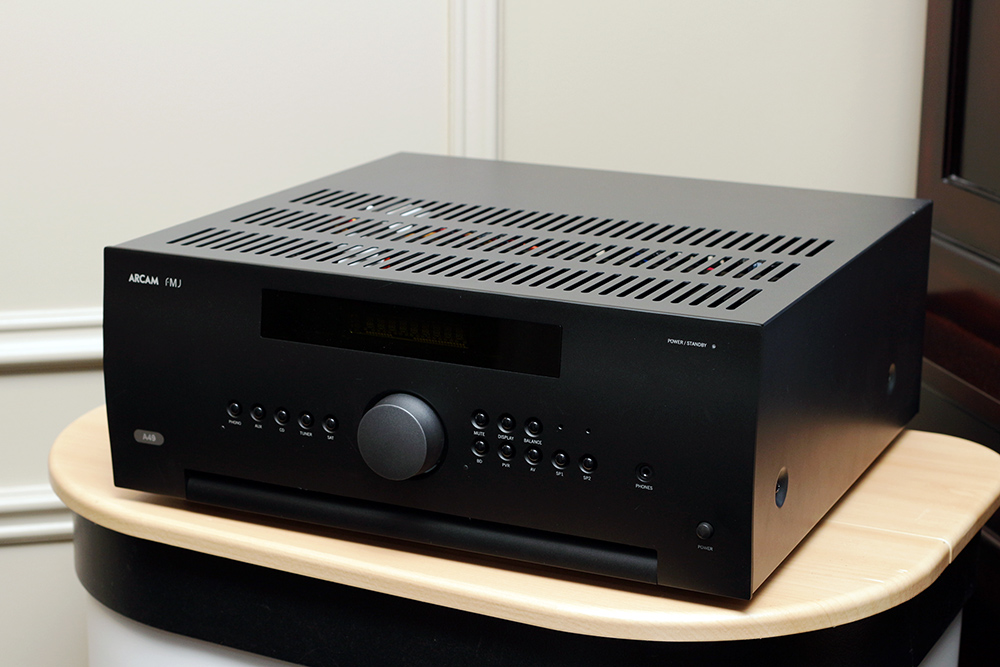 Arcam introduced their new A49 integrated amplifier ($5000), the first product I’ve heard that costs less than my reference Hegel Music Systems H300 integrated-DAC ($5500) while sounding as good. Possibly better. The sedate-looking Arcam doesn’t have the chic design and highly attractive metalwork of the aforementioned products, but it does have a relatively novel amplifier circuit. The New York-made amplifier uses a class-G topology that delivers 200Wpc, the first 50Wpc in pure class-A. Class-G uses several power rails at different voltages to minimize the waste of power at the output transistors. The benefit is the sonorous qualities of class-A, with power efficiency approaching that of a switching amp. And the sound -- it was uncannily clean and revealing, despite being connected to relatively modest Canton bookshelf speakers. While I know Canton makes well-engineered stuff, I was deeply impressed with what the A49 could do. I’m interested to learn more about class-G -- Arcam is not the only company pursuing this uncommon circuit architecture. Promisingly. 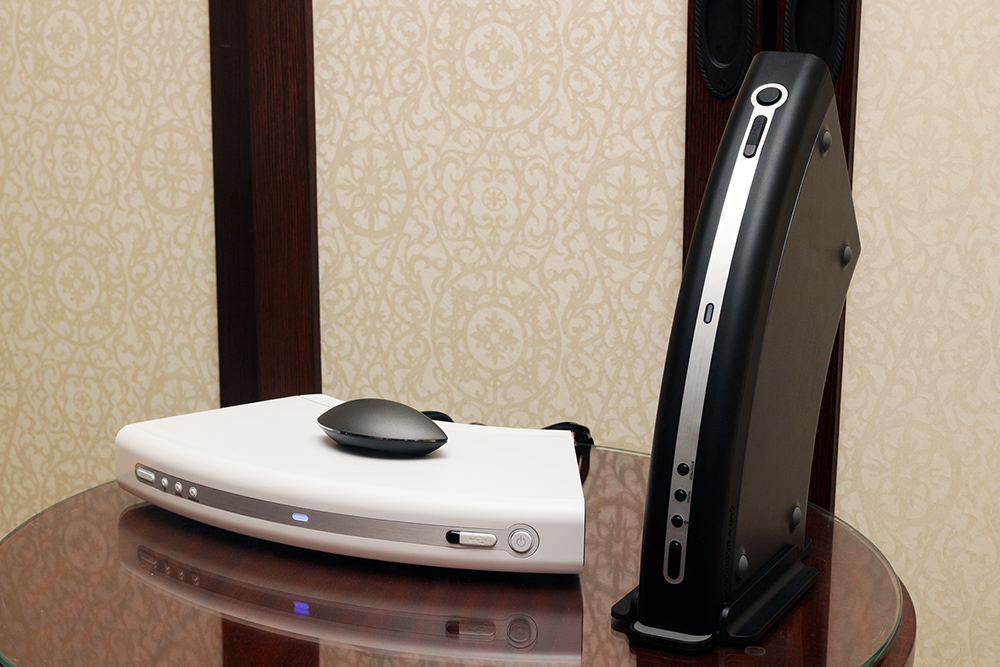 Last, I was about to be given a demonstration of Monitor Audio’s new Airstream A100 integrated amplifier, and before my backside had even hit the listening chair I was sketching my rapid departure from the room. I had a lot of work to do, and desperately needed a cup of coffee. But at a show like CES, you’re bound to be surprised. Many times, surprise will come in the form of sticker shock: garbage gear at very high prices. Faced with this English speaker company’s first foray into electronics, however, I was startled by the A100’s sheer functionality. On tap are a 50Wpc class-AB amplifier, analog RCA inputs, preamp outputs (which double as a subwoofer output), an optical input, DLNA and Apple AirPlay wireless functionality, a front-panel USB port for music-filled thumb drives, and a sound that belies its low asking price. In fact, I was floored when I was told that the A100, available in black or white, will retail for $500 when it bows in March. This is a shot across the bows of NAD’s D 3020 Hybrid Digital Amplifier ($499) and NuForce’s DDA-100 ($549), each a class-D amp. The A100 has a lot of potential -- it pushed a pair of Monitor’s bookshelf speakers pretty loud, with no hint of clipping. I have no idea how they managed to cram a class-AB amp into that slim, attractive chassis without heatsinks, but they did. These days, affordable hi-fi is pretty freaking cool.

Hello, 2014. Should be a fun year. Expect a lot of forward-thinking, integrated products to be reviewed here on SoundStage! Access, including several with healthy splashes of high industrial design. First, though, a shower. Man, Vegas sucks . . .