How Much Difference Do DACs Really Make?

If you’re just getting into high-fidelity audio and thinking about building a system—or if you’ve already started that process, but you’re not done just yet—you no doubt have a lot of choices ahead of you in terms of what gear to buy. You’ll need speakers, of course. That’s pretty much non-negotiable. You’ll need amplification, either in the form of an integrated amplifier that combines power, volume control, and source selection; a standalone power amp paired with a preamp; or active speakers with amps built in. And, of course, you’ll need at least one source, whether it be a turntable, a disc player, a media streamer, a PC, a smartphone, what have you. 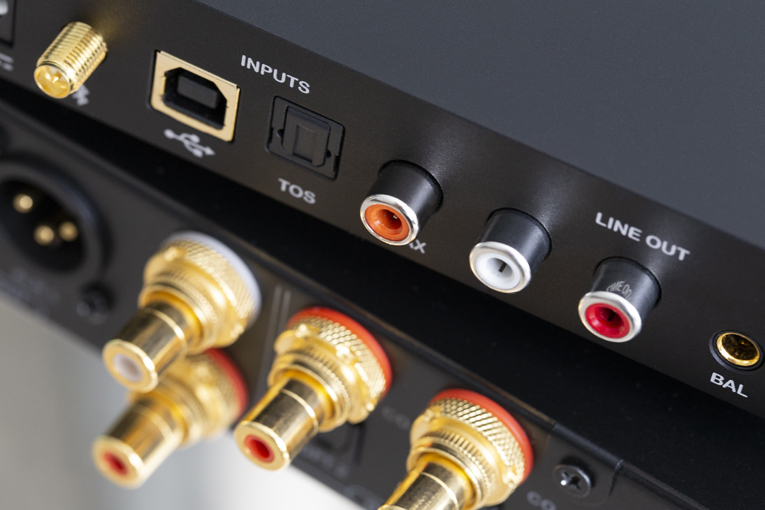 But if any of your sources is digital—be it CD, Blu-ray, files stored on a hard drive or portable device, or music streamed from the interwebs—you’ve probably heard that you also need a DAC (digital-to-analog converter).

But do you really?

The short answer, of course, is yes. At some point in the signal chain, you need a device designed to take a digital signal and convert it into an analog waveform that your speakers can reproduce. So, in a sense, unless your source devices are all analog, a DAC is as non-negotiable as a pair of speakers. That’s not in question.

The real question, though, is whether or not you need to buy one.

Wait, are you suggesting that I beg, borrow, or steal audio gear?

When I say it’s debatable whether you should buy a DAC, what I’m referring to is a standalone D-to-A converter—a separate box that you insert into your signal chain between your digital source component(s) and the analog inputs of your preamp, integrated amp, or receiver. Because the truth of the matter is that most of those devices—as well as a good number of active speakers—already have DACs built in.

But are they any good? Wouldn’t a dedicated DAC be better than an off-the-shelf chip shoved under the hood of another piece of gear out of necessity more than anything else?

Well, I’m not ruling it out as a possibility, but most integrated amps and active speakers I’ve reviewed in recent years have featured D-to-A conversion as good as anything you’d find in standalone DACs costing within an order of magnitude of the same price. Listening to Emotiva’s BasX TA1, for example, or NAD’s C 399—or, more recently, Rotel’s A12MKII integrated amp—I’m just not hearing anything in terms of digital-to-analog conversion that could be improved upon by any outboard DAC. Hell, even the DAC built into my iPhone is on par with (or frankly better than) many standalone audiophile D-to-A converters. I can’t speak to Android phones, mind you, and I’m not claiming that the iPhone is a perfect source device, but purely in terms of taking a digital signal and turning it into a faithful analog signal, it’s shockingly accurate.

So it’s reasonable to assume—if a mass-market smartphone delivers such high-quality conversion—the DACs built into devices aimed at audio enthusiasts are probably really, really good. And my testing in recent years confirms that suspicion.

So, wait, why do they make standalone DACs then?

There are a few reasons you might want to purchase a separate DAC—some legitimate, some . . . less so. Despite the fact that so many integrated amps, stereo receivers, active speakers, digital source devices, etc., have fantastic built-in D-to-A converters, not all of them do. The Rotel A11 Tribute I reviewed last year, for example, lacks digital connectivity entirely, except for Bluetooth. So its DAC, while great, won’t work for any physically connected device like a CD transport, media streamer, or computer. But if you’re in the market for a great integrated amp and your budget is right around $800, I don’t think you should let the lack of digital connectivity scare you off that one. In that case, sure, you need an outboard DAC if you want to connect a digital source that doesn’t do its own D-to-A.

If you’re building a dedicated headphone setup, a lot of headphone amps lack built-in DACs, so you’ll need one. And, of course, there are literally tons of great vintage stereo receivers sitting around on the shelves of pawnshops and secondhand stores, so if you decide to go that route, you’ll almost certainly need to add a good modern DAC to the equation.

You might also find at some point that the DAC built into your gear doesn’t support a format you want to listen to. The Rotel A12MKII integrated amp I’m finishing my review of now, for example, doesn’t decode DSD via its USB input, so if you have a collection of DSD files on your computer and you bought an amp like the Rotel with a DAC that won’t decode them, you could either upgrade to something like the A14MKII, the next model up in the line, for $1600 USD, or you could buy an outboard DAC that’ll decode DSD and deliver an analog signal to your amp. The same could be said for formats like MQA (not my jam, but I’m here to elucidate, not to judge).

Another legitimate reason to dip your toes into the world of outboard DACS—after you’ve finished building your system and have moved on to the tinkering phase—might be to experiment with different settings that normally aren’t accessible on the D-to-A converters built into multipurpose gear.

The most common setting that some standalone DACs allow you to tweak is the filter. I won’t dig too deeply into what these filters are and how they work—this is not intended as a technical deep dive, but rather general buying advice for new audio enthusiasts—but the bottom line is that the filter is the final step in the conversion from PCM to analog. And some DACs allow you to tweak settings that affect high-frequency roll-off and delay, for example. They’re often described using language like “sharp” and “slow,” and you’ll also often see verbiage like “linear phase” or “short delay.” 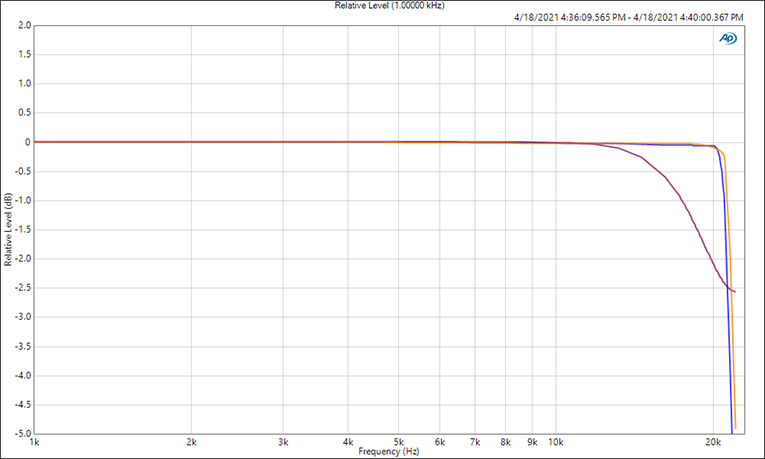 While many of these different filter types introduce measurable differences in the resulting analog signal, I’ve found that the differences oftentimes aren’t audible or meaningful (meaning if I do hear a difference, there’s no objective basis for picking which one is preferable, and my preference for one or the other might change from day to day or depending on what I’m listening to—and not by much). And some of them introduce a significant and audible high-frequency roll-off that is definitely not to my taste. But again, I’m not here to judge. If you’ve tweaked to your heart’s content and you’re still looking to make adjustments to your system, this might be one avenue you want to explore.

But what about those—ahem—less legitimate reasons for dabbling in outboard DACs? Well, the truth of the matter is that some folks in our hobby are prone to becoming enamored with outdated technologies that sound different, to be sure, but are inferior by any objective measure. Non-oversampling ladder DACs—also called NOS R-2R DACs—are just one example. I once edited a piece for another publication in which the author claimed that ladder DACs are somehow purer in their function because they work “purely in the analog domain.” That is, of course, entirely incorrect, and when I explained that an R-2R ladder functions as a binary logic gate—which is by definition digital—my edits and suggestions were ignored. Thankfully, my name appeared nowhere on that piece.

The thing is, given how little understanding there is of how digital audio actually works, you’ll run across flawed logic like this quite frequently in the audiophile world. Long story short, if what you’re looking for is reasonably accurate digital-to-analog conversion, you can safely ignore things like NOS DACs. Then again, accuracy may not be your goal.

There is, it should go without saying, a lot that I’m leaving out or oversimplifying in the above discussion, and maybe we’ll dig deeper into some of the specifics in future articles. I’m sure I’ve got at least a thousand words in me about why non-oversampling DACs make absolutely no sense in a 21st-century stereo system. But for now, I’ll leave it at this: If you’re just getting into hi-fi, chances are very high that any system you’re likely to put together will have at its heart a component with built-in digital-to-analog conversion capabilities. And as long as you stick with tried-and-true brands, the implementation of that DAC will almost certainly be very good—by which I mean as good as or better than the implementation of any reasonably priced standalone DAC designed for the audio-enthusiast market. 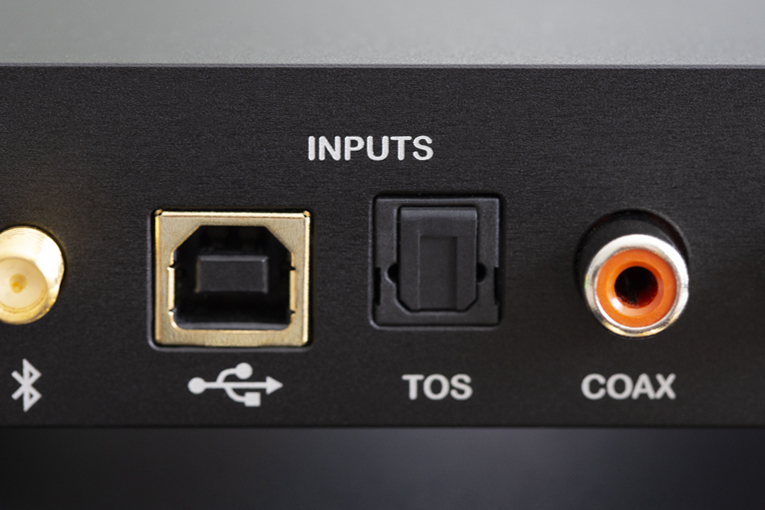 Again, this is not intended as the last word on anything, and there are any number of reasons you might want to experiment with different DAC technologies. But as long as your system decodes all of the digital formats you want to play, and assuming you’re not hearing any audible artifacts resulting from digital-to-analog conversion gone wrong, I kinda think a standalone DAC should be one of the last things you purchase.

If you’re simply itching to upgrade your system, you’d probably be far better off taking the money you would have invested in an outboard DAC upgrade and spending it on some inexpensive acoustical treatments for your first reflection points, if you haven’t done so already. That’ll make far more audible and measurable improvements to the quality of sound reaching your ears than any DAC upgrade ever will, assuming the DAC you’re already using is well-designed. The good news is, most of the ones built into modern hi-fi gear absolutely are.