Should You Buy More Amplifier or More Speaker Than You Need?

I envision a day in the not-too-distant future when the average audiophile loudspeaker will be active, not passive, and will have built-in amplifiers and DSP optimally matched to the drivers, ensuring the entire speaker safely performs to its fullest potential. But we’re not there yet. So if you’re new to the world of hi-fi and looking to build a component stereo system, one of the most critical purchasing decisions you have ahead of you is selecting the right amp and speakers for your needs.

Needless to say, speakers and amps are very different beasts, one being an electromechanical device designed to take in electrical energy and output acoustical energy, the other being an electrical component that increases the amplitude of a weaker electrical signal. That said, the most basic performance capabilities of both speakers and amps are described using the same language: power (watts) and impedance (ohms). So it seems a simple enough task to select speakers and amps that match most closely in those respects. But since it’s rare to find both speakers and amplifiers that fit your needs and match perfectly in these criteria, you’re likely going to be choosing between “too much” speaker and “too much” amplifier. 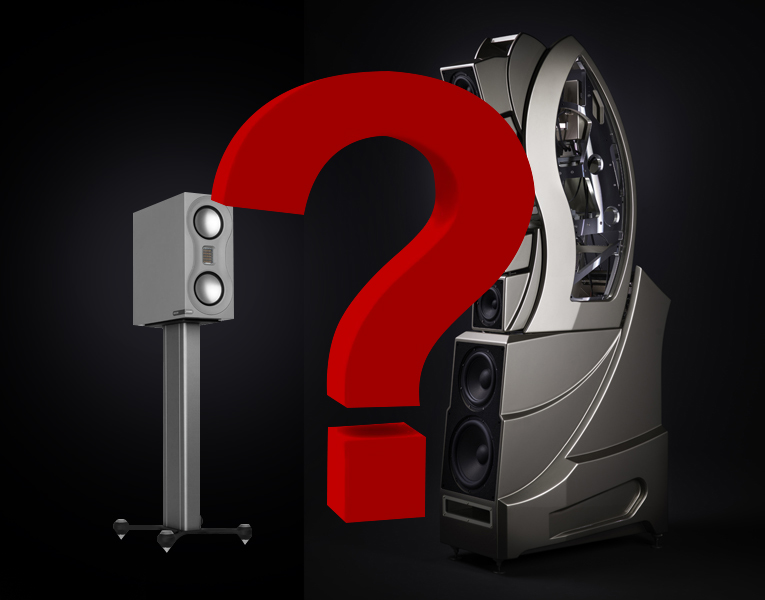 What do I mean by “too much”? Well, in the case of speakers, it may mean a speaker that wants more power than your amplifier can deliver, or it could simply boil down to a cabinet and driver configuration that’s too large for your room. With amps, it generally means having more power than your speakers are rated to handle.

So which is preferable? Unfortunately, any general buying advice I could give you in this respect would be proven wrong by any number of specific examples, and any truly comprehensive explanation of why this is the case would be TMI for the novice audio enthusiast. But the least-wrong rule of thumb I can give you is this: buy “just enough” speaker and “too much” amplifier.

That just-enough speaker is one that’s sufficiently large for your listening space, with enough power handling, as well as enough sensitivity—a measure of how much acoustical energy a speaker will deliver in relation to the voltage you feed it. A speaker with higher sensitivity will require less amplification to reach the same loudness levels in the same room.

Once you’ve found a speaker you like, figure out its power requirements. Then buy an amp with a bit more power, and you’ll probably be safe.

Wait, safe from what?

When I was first getting into hi-fi back in the late ’80s and early ’90s, a common refrain I heard from Circuit City sales associates and other purveyors of stereo gear was, “You’ll damage your speakers if you underpower them.” And that’s just flatly wrong. But like most truisms, there’s a kernel of fact hidden in that sentiment. In actual fact, you can damage a speaker by mating it with an amp that doesn’t provide sufficient clean power, but what’s happening here is not your speaker being starved to death. It’s simply that if you ask your amplifier to produce more juice than its power supply is capable of supplying, you’ll likely send the amp into clipping, a form of distortion that shows up on an oscilloscope as a waveform whose tops and bottoms have been clipped off.

The consequence is that instead of feeding your speakers a nice AC waveform, you’re suddenly giving them a signal with a significant DC component, as well as a lot of added high-frequency harmonics. To simplify this even further, the drivers in your speakers were designed to accommodate peak voltage for the briefest fractions of a second, but when you introduce a clipped signal, you’re subjecting those drivers to sustained peak voltage, which results in heat buildup that the driver can’t dissipate, which results in kerflooey. And by “kerflooey,” I mean the voice coil probably burns out. So a speaker that has been damaged by an undersized amp is still being killed by too much power, not too little. Although, technically, what’s doing the murdering here is heat, not electricity.

There’s an exception to every rule about speakers and amps

If you’re well versed in the technical specifics of audio reproduction, you probably immediately thought of a few noteworthy exceptions. But keep in mind that this article isn’t intended as the last word on anything; it’s intended as general buying advice for newbies. Even neophytes, though, may run into scenarios where this explanation is too simple.

For example, I had the bog-standard class-AB amp in mind when I wrote the above. But if the amp you’re considering is of class-D topology, clipping might not be as big of a concern. A lot of class-D amps are designed such that they can’t be overdriven. You could still potentially overdrive the input stage of the amp, so that’s something to consider. But it’s not highly likely.

If, on the other hand, you’re considering a tube amp to drive your speakers, you probably have even less to worry about in terms of clipping thanks to the roll-off from the output transformer. That means you’re probably not in any significant danger powering your speakers with a tube amp whose output is below the recommended amplification range for your speakers, as long as you don’t get ridiculous with your volume knob. My friend Sandy Gross (former owner of GoldenEar Technology and co-founder of Polk Audio and Definitive Technology) once intimated to me that he really loved driving a pair of GoldenEar Triton Two towers (recommended power range of 20 to 500W) with a 6W tube amp. 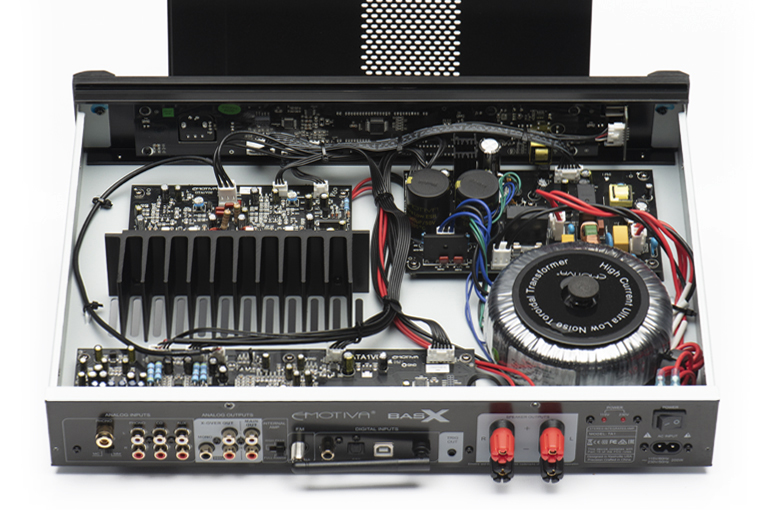 Even with class-AB amps, though, having too little amp for your speakers isn’t always a problem. I recently wrapped up my review of Monitor Audio’s new Silver 300 7G speaker, which has a recommended amplifier range of 80 to 200W. At one point, though, I drove the pair like a rented mule with Emotiva’s BasX TA1 stereo receiver, which is rated to deliver only 60Wpc into 8 ohms (the nominal impedance of the Silver 300 7G). The speakers did lose a bit of bass authority the more loudly I played them, which I suspect is a consequence of a really low dip in the speakers’ impedance somewhere in the range of 100Hz to 150Hz. Ohm’s law states that I=V/R, or current (I) is equal to voltage divided by resistance (or impedance), so when impedance drops, current draw goes up, and I suspect that the TA1 simply couldn’t supply enough current to fully power the Silver 300 7Gs’ bass drivers as loudly as I was playing the speakers. But I honestly think the speakers would have run me right out of the room before the amp ever actually went into clipping.

Still, though, it wasn’t out of the realm of possibility, and if I had pushed the TA1 into clipping, it wouldn’t have taken long to fry a voice coil. And mind you, I was trying my hardest to push the amp out of its comfort zone to see how it behaved. That’s risky behavior, no doubt. So if you want to play it safe, and assuming you’re not pairing your speakers with a class-D or vacuum-tube amplifier, your best bet is to make sure you have a bit more amplification than you actually need.

But how much amp do you actually need?

Granted, telling you to buy a bit more amp than you need isn’t very helpful advice if you don’t know exactly how much amp you need. Thankfully, amplifier manufacturer Crown has developed a really handy calculator that will let you figure that out, based on your wants, needs, and environment. To keep things from getting too abstract, let’s use the real-world example of the Monitor Silver 300 speakers I referenced above. I know the company gives a suggested amplifier range of 80 to 200W, but how much amplification would I actually use in my room, with my setup, with those speakers?

By plugging the variables of the Silver 300 into Crown’s calculator, we can find out. I start with the listening distance: in my case, right at 2m. I then plug in the speakers’ sensitivity: 87.5dB. How loud do I want to get? That really depends on the music, but I just popped in George Michael’s “Freedom! ’90” (a song that always has me reaching for the volume knob) and turned it up until I was satisfied. I was hitting peaks of 99dB—which, granted, is not sustainable for any meaningful duration, as sounds that loud can cause permanent hearing loss in as little as 15 minutes. But “Freedom! ’90” is only six-and-a-half minutes, and this is for science. 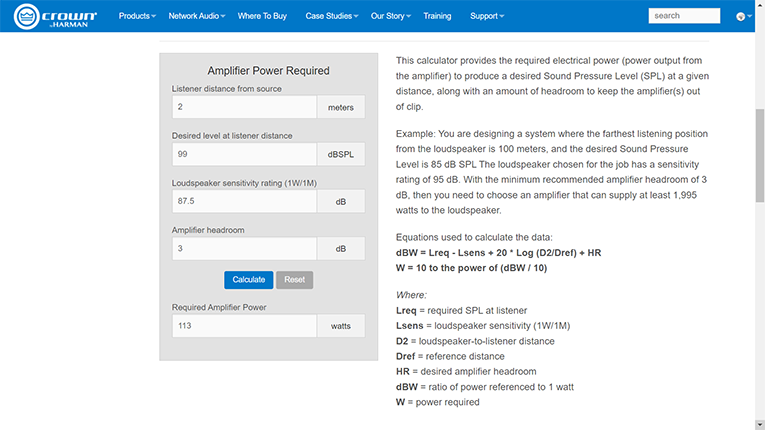 I plugged 99dB into the Crown calculator as my max desired SPL, and left the amplifier headroom at 3dB. After I hit the Calculate button, Crown recommended 113Wpc of amplification in this scenario. Given that, I would probably shop for a 125 or 150Wpc amp just to be safe. Since my subjective listening tests with the Monitors and Emotiva’s TA1 amp led me to believe that the Silver 300 has a pretty low dip in impedance smack dab in the middle of the bass region, I would likely also shop for an amp that’s stable with loads down to 2 ohms, just to be extra super safe.

But again, keep in mind that this scenario is built around extremes. Most days, I’m gonna be listening at more like 85dB, which is plenty loud, just not “I need George Michael to drown out my anxiety” loud. Leaving everything else the same and changing my max SPLs to 85, it turns out I would be asking my amp to deliver a whopping . . .

If this were a forum post and not an article for a respectable hi-fi publication, I would have followed that with a hardy “LOL.”