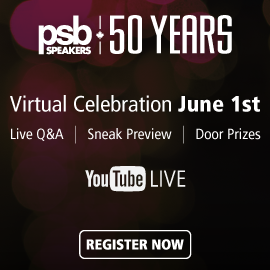 (What's So Great About Peace, Love, and) Integrated Amplifiers?

If you haven’t noticed already, there’s a bit of a theme being established with my new and upcoming reviews for SoundStage! Access. To call it “all integrated amplifiers, all the time” would be a bit of a stretch, but not by much. I recently took a deep dive into Marantz’s PM-KI Ruby, and I’m following that up with reviews of Rotel’s A11 Tribute and Vincent Audio’s SV-500. And those will hardly be the last integrated amps to cross my threshold in the coming months.

When I pitched the idea of this succession of int-amp reviews to my SoundStage! overlords, I justified the lack of diversity by pointing out that this experiment would give me a chance to explore what you get by spending a bit more for a hi-fi setup, examine what (if anything) you give up by spending a little less, and—as I’ve said in previous posts—help me start to define that fuzzy boundary between high-value gear and high-end gear. And while that’s true, I’d be lying if I said that was the beginning and end of my motivation.

The simple fact of the matter is that I just adore integrated amps. In fact, I think they may be my favorite product category of all. But why? Why this personal passion for products that are, when you get right down to it, little more than stereo amps with volume control and source selection tacked on?

As with most things audio-related, nostalgia certainly plays its part. My first real piece of high-performance audio gear was an integrated amp. An old Pioneer A-70, to be precise. It wasn’t actually mine—it belonged to an uncle, who lent it to me for safekeeping when my aunt told him that it and the rest of his stereo system were junking up the living room, and either it had to go or he had to go and take it with him. 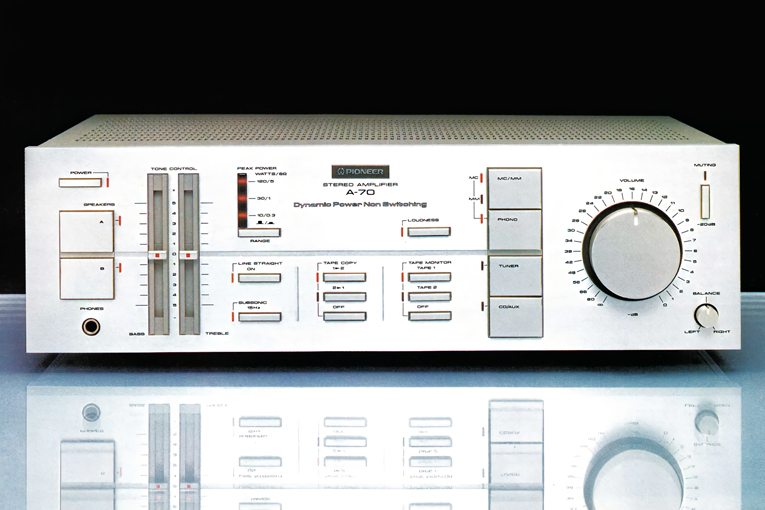 I don’t remember what turntable was attached to it, nor the exact model of CD player (although the latter was almost certainly a Pioneer as well). And all I remember about the speakers are their white grilles. But that A-70, man! Those funky tone-control sliders. Those whacky rectilinear buttons. That big, beautiful volume knob that went from ∞ to 0 in -dB. I don’t think I even knew what a dB was at the time, much less a negative one, but I can tell you that this was the genesis of my volume-knob fetish.

I’m not sure where my binding-post fetish originated, to be honest, but I can’t blame the A-70 for that one. Its speaker connections were standard black-and-red plastic, although I will say this: they were a big step up from the spring-loaded speaker-level outputs I’d known to that point.

Of course, even spring-clipped audio components were a similarly massive step up from the gear through which I’d experienced music to that point in my life. Nine times out of ten, if I heard “Bad, Bad Leroy Brown” or “Suspicious Minds” or “Karma Chameleon” cranking through the house (the latter, of course, only when my folks weren’t home), the sound was coming from a denim-covered record player with built-in speakers or a plastic clock radio with faux-wood paneling and split-flap numbers that rolled over like the leaves in a Rolodex.

By contrast, the sound that poured out of that old A-70 may as well have been flowing from the heavens. It was my first real taste of full-bandwidth, highly dynamic, detailed audio with proper stereo imaging and any meaningful off-axis performance. 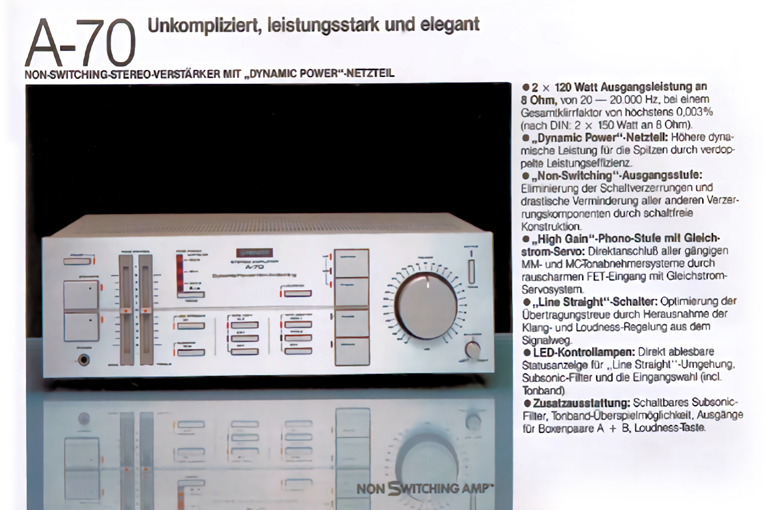 Sadly, the A-70 didn’t live with me for long. When my aunt kicked him out for the last time, my uncle made a beeline for my parents’ house and absconded with that old A-70 and the accompanying rackful of gear and speakers. And deep down, I suspect that I’ve been trying to fill the void it left ever since.

The times, they have a-changed

Integrated amplifiers have, of course, evolved a bit since the mid-1980s, or at least some of them have. These days, your average integrated amp also happens to function as a digital-to-analog converter, probably a headphone amplifier, and in many cases a media streamer as well.

But that’s not always the case. Some of my favorites—like Naim’s Nait 5SI—are purely analog affairs, true to my original description of “stereo amps with volume control and source selection tacked on.”

What this means, of course, is that no matter what your needs and desires are in terms of two-channel audio, there’s almost certainly an integrated amp that fits right into your lifestyle. And that isn’t limited to a simple choice between digital and analog.

You want or need a beefy 200Wpc beast of an amp with class-AB topology, a balanced design, and tone controls? There’s an integrated amp for you. Is a flea-watt vacuum-tube design with an onboard phono stage more your speed or a better match for your speakers? There’s an integrated amp for you. And the beauty of it is, once you find the right int-amp for your needs, you’re very nearly done building a complete (and completely satisfying) stereo system. Just add speakers and a source or three, and you’re done.

There’s also, it goes without saying, an integrated amp for virtually every budget. Over the past few years, I’ve reviewed integrated amps that have run the gamut in terms of pricing, from “impulse purchase for a fresh-out-of-high-school audiophile working his first minimum-wage job” to “reasonably serious investment for a Wall St. executive who digs the Mark Levinson sound system in her Lexus and wants something similar for her penthouse.” And I’ve loved at least something about most of them. Most had their own distinct personality. Their own character. Their own raison d’être. 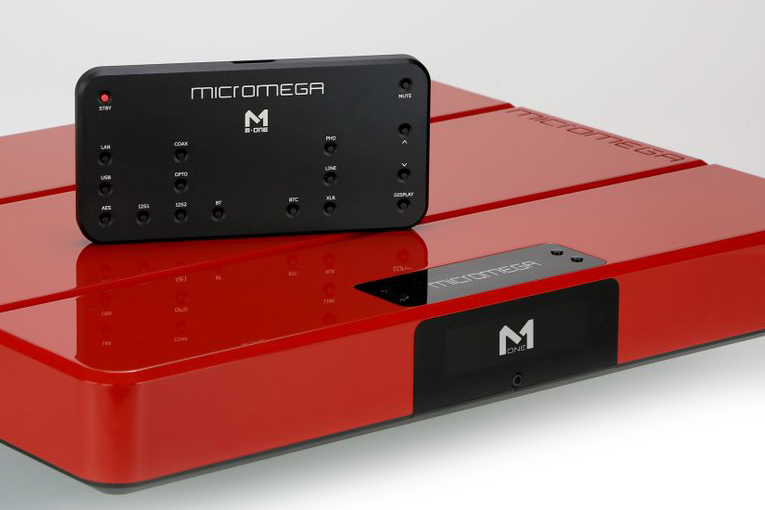 Most, despite their price, also represented something of a good value. (OK, maybe not that $7500 Micromega M-150 that I still pine over nearly three years after I boxed it up and shipped it back, but there’s a reason for that.)

What do I mean by value? Well, consider this: Say you’re itching for a new stereo setup, and you’ve taken a shine to the sound of Parasound gear. You could always opt for the P 6 preamp and A 23+ amp, both of which are incredible components and worth every penny of their prices. But for a couple hundred bucks less at most retailers, you could instead spring for the Hint 6 integrated amp and get the same preamplifier section and, as best I can tell, the same amplifier circuitry all in one chassis with half as many power cords, way fewer interconnects, and some measure of space-savings to boot. 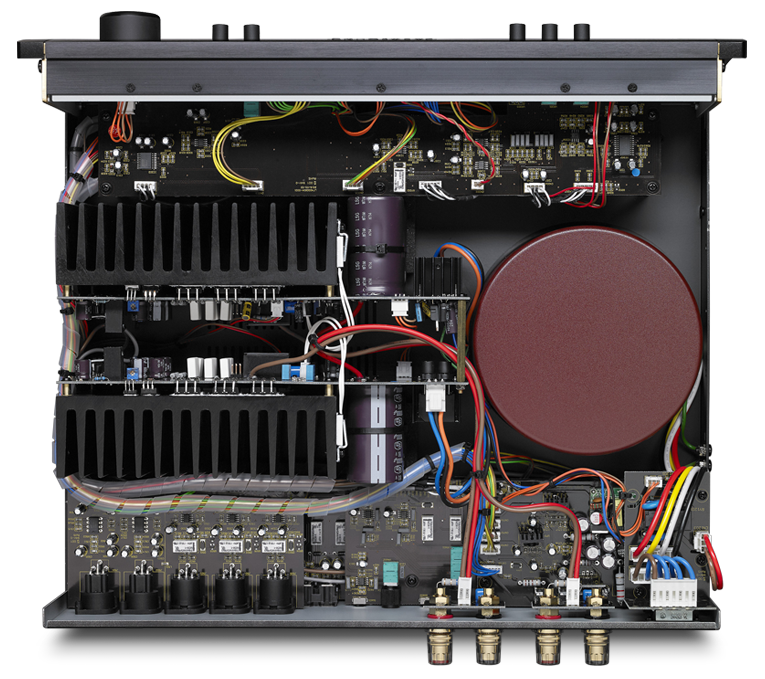 And I’m sure someone out there would tell you that the separates would give you better performance . . . for reasons. To my ears, though, they sound practically identical. Sure, going the integrated route cuts down on your upgrade options, but that’s one of the only significant downsides. (And I say this as someone who swears on separates in a home-theater application.) Of course, not every integrated amp can trace its lineage to standalone preamps and amplifiers. But when it does, the integrated option generally costs less than the sum of its parts.

One last thing I love about integrated amps is their aesthetic diversity. And I know not all audio enthusiasts give a rat’s patootie what their gear looks like, but unlike most of my A/V components, my stereo gear generally sits out in the open, not cooped up in a rack or behind cabinet doors. I like to touch it. I like to see it. I like to fiddle with the knobs and buttons. For me, the tactile element of a stereo system is essential, despite the fact that I’ve migrated to digital downloads and streaming for 99 percent of my day-to-day music needs. 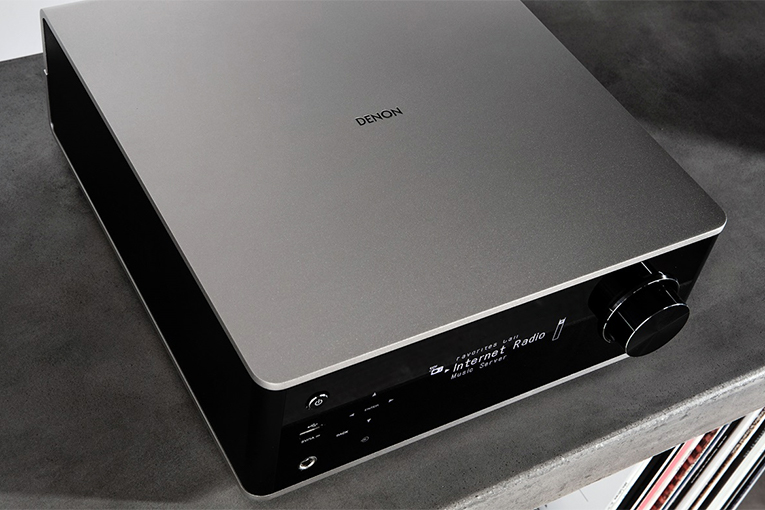 I also dig that you can tell a lot about the functionality of a good integrated amp just by looking at its form. No one would ever confuse a Denon PMA-150H with a Luxman SQ-N150. And generally speaking, a glance at either will tell you whether one is a better fit for your needs than the other. One is a wholly modern-looking to-do with flush touch-sensitive controls and a USB port right there on the front panel to hint at its digital capabilities. The other wears its tubes and its incandescent-backlit analog meters like a badge of honor, and its back panel drives its priorities home by specifying only the phono input, leaving the rest unnamed like the Professor and Mary Ann in the season one version of the Gilligan’s Island theme song (“. . . and the rest”). One of them is capable of driving my big Paradigm tower speakers like a rented mule. The other measures its output with a 6-ohm load just to get the rated wattage into double-digit territories. 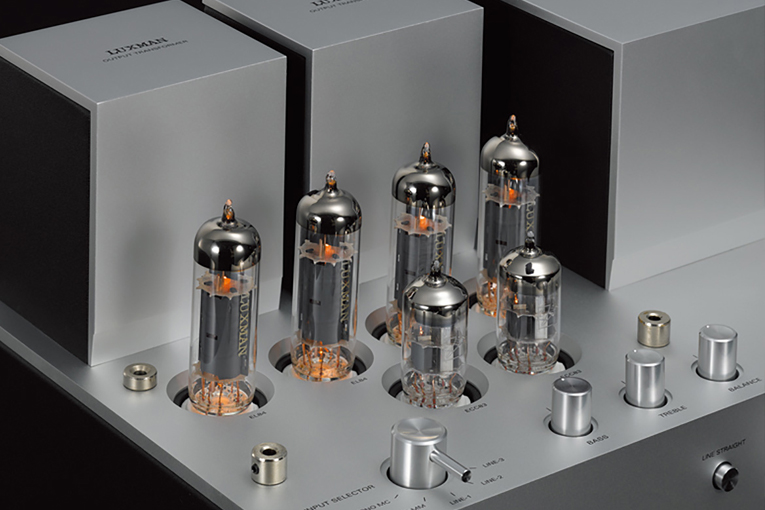 And I’m not saying one approach is better than the other. I’m simply saying that, despite their differences, each of these drastically dissimilar products is the perfect integrated amplifier for somebody. And you could probably tell which one is right for you at the most casual of glances without even peeking at the specs.

Try that with an A/V receiver and see where it gets you.