When I think of Sonus Faber, I think first of their ultra-high-end speakers -- for example, the Aida, which retails for $130,000 USD per pair. However, their speaker line spans a huge range of prices, and is one of the most comprehensive I’ve seen. My second thought is usually of the exquisite Italian craftsmanship evident in every Sonus Faber speaker, and their extensive use of cabinets shaped like works of art. 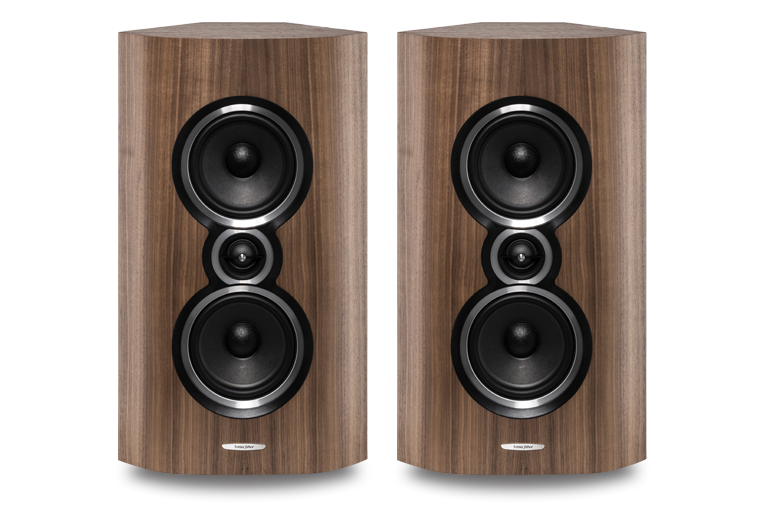 The Sonetto models range in price from $850 to $3500 each, which puts them in the more affordable branch of the Sonus Faber speaker family, above the Venere line and below the highly regarded Olympicas, with both of which the Sonettos share elements of appearance and technology. The Sonettos comprise three tower models, two bookshelfs, two center-channels, and one on-wall surround, and it’s the last that’s the subject of this review: the Sonetto Wall ($1199 each). Sonus Faber advertises the Sonetto Wall as having a sound that’s a tonal match for the other Sonetto speakers for use in a surround system, but in my listening I was most interested in how the Walls performed as a stereo pair of wall-mounted speakers.

Like Sonus Faber’s other Sonettos, the Wall is available in three luxurious finishes: walnut veneer, matte satin white, and gloss piano black. My review samples, in piano black, oozed high style and class. The flawless finish of four coats of hand-rubbed lacquer, applied in the Sonus Faber factory in Vicenza, Italy, rendered the wood joins invisible -- each Wall looked as if carved from a single block of wood. The speaker’s right and left edges are slightly rounded, and its front baffle is gently curved; a single black, magnetically attached grille covers all three drivers.

The Sonetto Wall measures only 4.75” deep without its wall bracket, suiting its intended use as an on-wall speaker. It’s tall and fairly wide for a surround speaker, at 20”H x 12”W, and weighs 10.5 pounds. Like most recent Sonus Faber speakers, the Sonetto line has a distinctive shape: wide in front, with curved sides tapering to a narrow rear panel. Although this shape looks more attractive than the usual box speakers, Sonus Faber says that it also damps cabinet resonances that would otherwise distort the sound produced by the drivers. 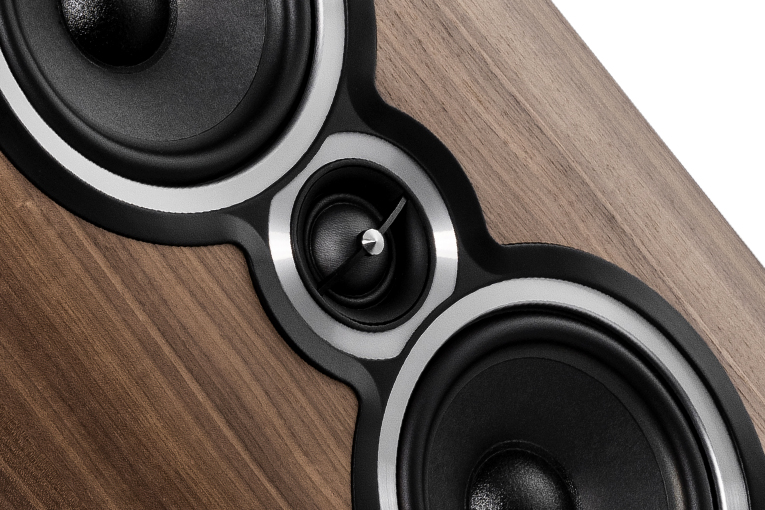 The Sonetto Wall is a two-way speaker with one woofer above and one passive radiator below its single tweeter. The woofer and passive radiator are both 6” in diameter, with cones of cellulose pulp. A passive radiator helps the speaker go lower in the bass by working in concert with the woofer, and is used in place of a port, which can be difficult to implement in a shallow enclosure, especially one mounted on a wall.

Between the two 6” cones is a 1.25” silk-dome tweeter. This driver, which Sonus Faber calls a Damped Apex Dome (DAD), resembles a conventional dome tweeter, but arcing across the front of it is a curved bar bearing a little knob of damping material that just touches the apex of the dome’s radiating surface. According to Sonus Faber, the DAD technology -- trickled down from their higher-priced Reference, Homage, and Olympica lines -- extends and smooths the speaker’s high-frequency response more than a conventional silk dome can do on its own. 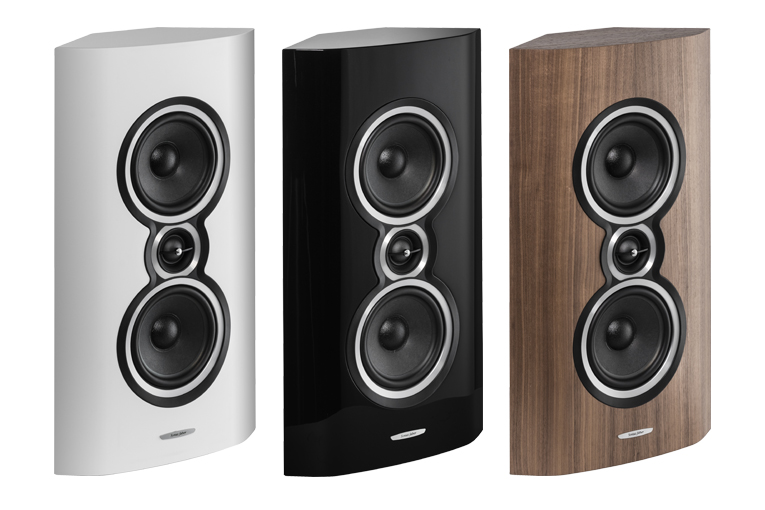 Sonus Faber specifies the Sonetto Wall’s frequency range as 60Hz-25kHz. The tweeter is crossed over to the woofer at 3800Hz, and the nominal impedance is 4 ohms. The claimed sensitivity of 89dB/W/m indicates a relatively easy load, though to get the most out of these speakers you’ll still want a power amp that puts out a decent amount of current -- Sonus Faber recommends “30W-150W, without clipping.” A good integrated amp or receiver -- e.g., my Anthem MRX 720 (140Wpc into 8 ohms) -- would be a good match.

I set up the Sonus Faber Sonetto Walls in my listening room, which measures 23’L x 16’W x 8’H; my electronics are set up at the end of one long wall. I mounted the Walls on that wall using the included jointed brackets -- clever devices that comprise a bracket that attaches to the wall and a second bracket that attaches to the speaker, connected with bolts at top and bottom. The brackets let you set the speakers at various angles, to optimize the imaging; their only drawback is that the Walls then aren’t mounted flush with the wall, and stick out a few inches. However, when the speakers are viewed from the front the brackets are hidden -- the speakers appear to float in space. The Walls were about 12’ from my listening seat and 8’ apart. One compromise I had to make, due to my room configuration, was that the tweeters were a bit higher than I like -- about 1’ higher than my ears when I sit down. 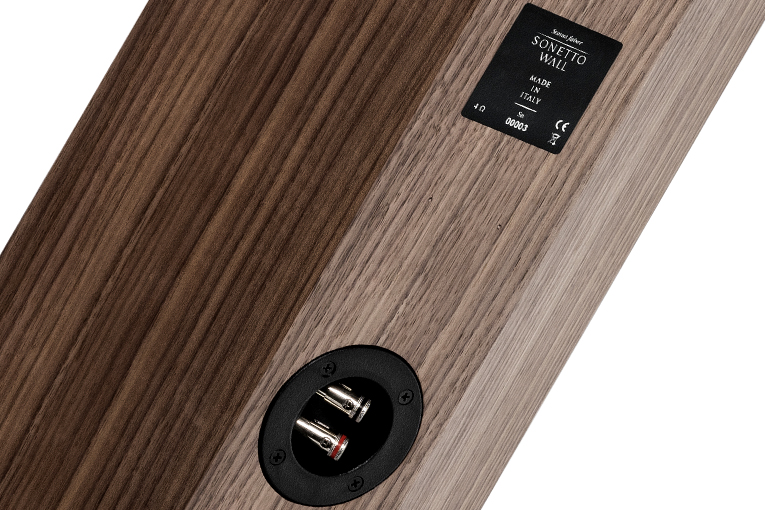 I drove the Sonetto Walls with my Anthem MRX 720 receiver, through which I played music using the DTS Play-Fi app on my iPad. For this review, I deactivated the MRX 720’s built-in Anthem Room Correction (ARC) and turned my subwoofer off.

The Sonus Faber Sonetto Walls sounded different from other wall-mounted speakers I’ve auditioned, with a refinement not usually heard in this class of speaker. Often, an on-wall model is an afterthought, to fill out a speaker line and provide an alternative when floorstanding or stand-mounted speakers won’t work. Designing a speaker that works well when mounted flush with a wall often requires compromises, but I heard few compromises from the Sonetto Wall. This shouldn’t have surprised me coming from Sonus Faber, a company known for producing super-high-end speakers. This was evident in the bass response: The Wall provided bass that was deep for its size, reminiscent of that of a good bookshelf speaker. A good example was “The Peppery Man,” from Natalie Merchant’s Leave Your Sleep (16-bit/44.1kHz FLAC, Nonesuch). The deep bass voice of Isaac Freeman, of the gospel group The Fairfield Four, was reproduced intact through the Walls -- I didn’t feel I was missing any of his soulful impact. As Freeman’s voice filled my room, the Walls sounded like a pair of high-end bookshelf speakers. Punching out decent bass is a huge challenge for a thin, on-wall design -- tower speakers, with or without a subwoofer, would of course provide even more low-bass presence -- but in this department the Sonetto Walls performed admirably. If you want true full-range sound, which by definition would include that lowest octave, I suspect that the Sonetto Wall would be a good candidate for pairing with a subwoofer. 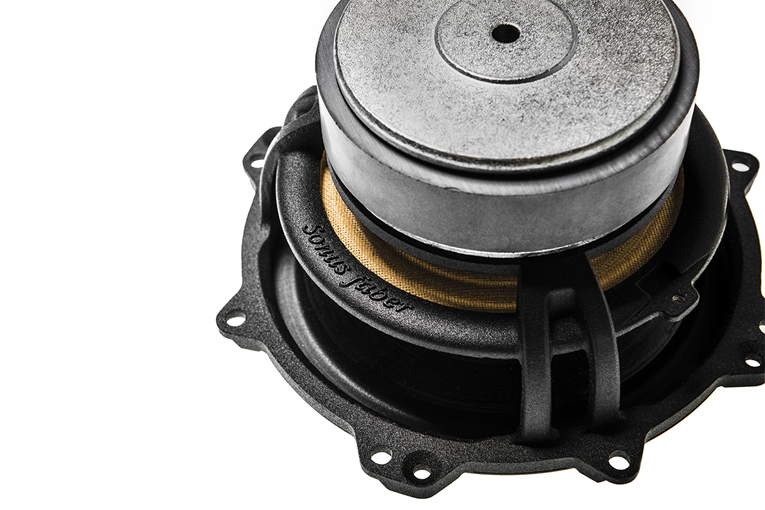 The Sonetto Walls’ reproduction of the high frequencies was notably smooth with jazz trumpeter Wynton Marsalis playing “Seductress,” from his Standard Time Vol.3: The Resolution of Romance (16/44.1 FLAC, Columbia). There was also plenty of detail, but it all was also easy on my ears, which was refreshing. Marsalis’s trumpet in this track can sound ragged and biting through less-refined speakers, but I could listen to the Walls for hours without my ears ever feeling fatigued. At times, the highs lacked the immediacy of some of the better bookshelf speakers I’ve heard, which might have been due to the Walls’ tweeter axes being a foot higher than my ears when I sit down to listen. Even so, I could hear that the Sonetto Wall would be a good choice for the audiophile whose room lacks enough space for optimal placement of a pair of floorstanders or even stand-mounted speakers.

I was impressed with the Sonetto Wall’s dynamic range -- surprisingly wide for an on-wall speaker. It’s a challenge for a speaker with a shallow cabinet to keep cabinet resonances at bay when played at high volumes, but Sonus Faber has done a good job of making the Wall’s enclosure inert. In “Dream in Blue,” from Los Lobos’s Kiko Live (16/44.1 FLAC, Shout! Factory), the dynamics of Louie Pérez’s drumming shone through the Walls even when I cranked up the volume -- the speakers didn’t lose their composure, sounding nearly as good as they had at lower volumes. When I laid my hands on one Wall’s cabinet, I felt only a little vibration. 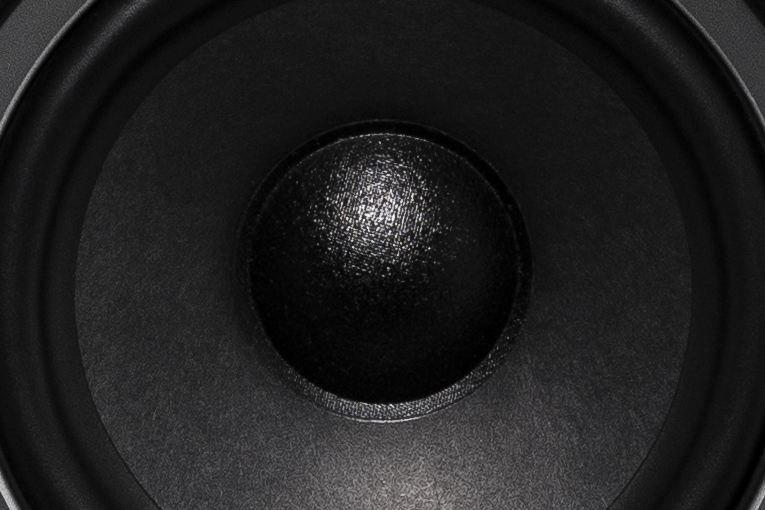 Most on-wall speakers have difficulty projecting a solid center image, given that wall placement isn’t ideal. I could achieve decent imaging with the Sonetto Walls when they fired straight ahead, but using their adjustable brackets to point them inward toward my listening seat took it to a whole other level of rock-solid lateral imaging. In Los Lobos’s “Angels with Dirty Faces,” David Hildalgo’s voice was solidly at center stage, with guitar to the left, percussion to the right, and, midway through the track, Steve Berlin’s sax in the far right speaker. Compared to freestanding speakers, the Sonetto Walls’ soundstage was understandably shallow, but that’s par for the course with on-walls.

Listening to the two models in back-to-back listening sessions, the biggest difference was in the high frequencies. The Motion 4i’s highs sounded more extended, the Sonetto Wall’s more refined. In “Keith Don’t Go,” from Nils Lofgren’s Acoustic Live (16/44.1 FLAC, Capitol), Lofgren’s guitar sounded warmer through the Walls, more clinical through the Motion 4i’s. The Motion 4i, whose cabinet contains a transmission-line venting system, produces remarkable bass response for its size -- but it couldn’t match the bass presence of the larger Sonetto Wall. In “You Look Good to Me,” from the Oscar Peterson Trio’s We Get Requests (16/44.1 FLAC, Verve), Ray Brown’s double bass was deeper and more noticeable through the Sonus Fabers than through the MartinLogans.

Compared to the Sonetto Wall, the Motion 4i excels in breadth of soundstage. The MartinLogans could also reproduce solid imaging -- the Sonus Fabers could match the MLs in that regard, but to achieve comparable imaging I had to toe in the speakers on their wall brackets. Listening to “Robot Lovers,” from Casey Abrams’s Put a Spell on You (24/192 FLAC, Chesky/HDtracks), I could easily picture Jacob Scesney’s saxophone moving around the room through the Motion 4i’s -- that spatial effect wasn’t quite as vivid through the Sonetto Walls.

I’ve auditioned plenty of on-wall speakers over the years, and Sonus Faber’s Sonetto Wall is a remarkably good one. It reminded me a lot of a great bookshelf speaker, such as the Focal Aria 906, but with the added benefit of a slim profile and wall mounting. I think it would be a shame to use them only as surround speakers in a home-theater array -- they’re better than that. But if you have the money, they should be a perfect match for your Sonus Faber Sonetto III or V towers, to make for outstanding home-theater surround sound. Or you could use a pair of Sonetto Walls on the walls to either side of your TV -- ideal if you lack the floor space for conventional floorstanders or stand-mounts. Sonus Faber’s Sonetto Wall has all kinds of potential for the discerning audiophile short on space.