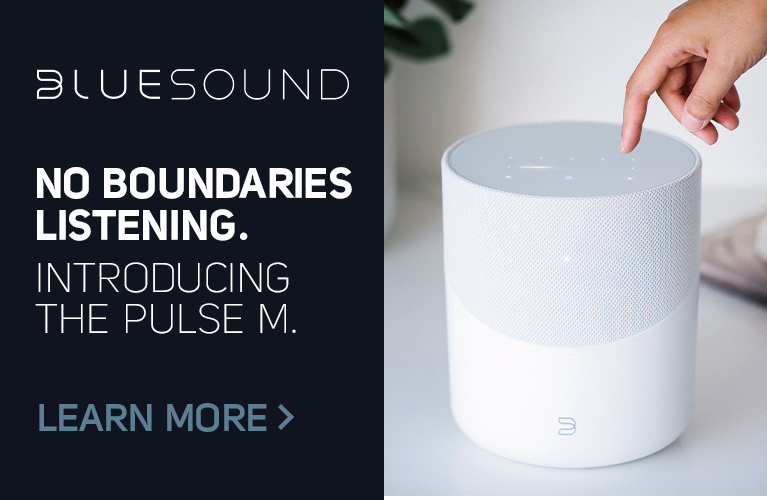 There’s a never-ending controversy about which type of phono cartridge is better: moving-coil, moving-magnet, or moving-iron. I fall firmly in the MM/MI camp. It’s not that I don’t appreciate MCs -- some MCs I’ve heard have created an almost magical sound -- but I’ve resisted, for a number of reasons:

A few years ago, when they became available in the US, I learned of the Nagaoka cartridges from Japan, which rapidly won enthusiastic reviews from users all over. But I didn’t run across one in person until recently. A friend had resurrected his turntable and found that all three of his cartridges had, over the years, lost their styli. I temporarily loaned him the Grado Gold from my Pioneer PL-516 turntable, as it had a compatible headshell. Then, based on reviews he’d read, he ordered a pre-mounted Nagaoka MP-110H ($149.99 USD) to use as his new primary cartridge. 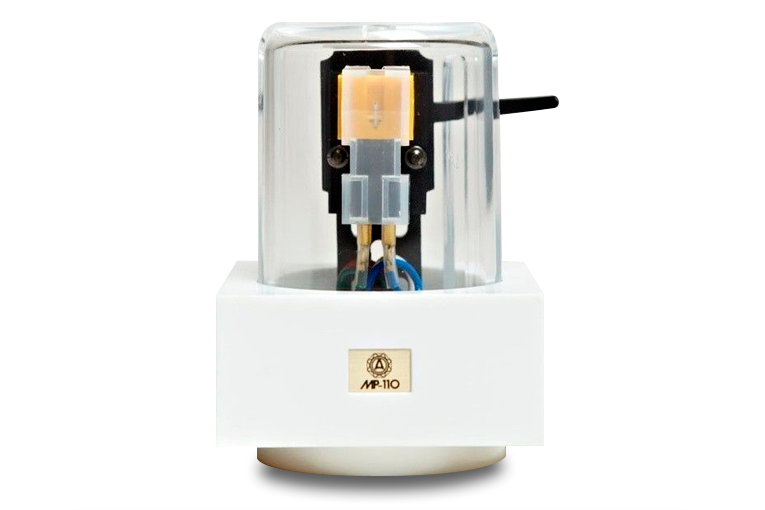 My friend and his wife recently went on vacation, and he offered me use of his Nagaoka until their return. I gladly accepted. His MP-110H became the primary cartridge in my Pioneer PL-516 turntable.

The Nagaoka MP-110H is no looker. It’s not sleek and svelte. It’s a small box with a small, square stylus mount. It has the standard 1/2” mounting holes, and four small pins at the back for the signal leads. Its 0.4 x 0.7 mil elliptical stylus is attached to an aluminum cantilever. It’s an MI cartridge, though Nagaoka calls its variation on this theme moving permalloy, or MP -- hence this model’s name -- for the highly magnetic alloy of nickel, iron, and molybdenum used.

The motors of MM cartridges -- i.e., the devices that generate the signals that an audio system eventually transduces into soundwaves -- have two basic components: a magnet moving past fixed coils. As the stylus tracks the record groove, the irregularities in the groove move the stylus back and forth and up and down, which moves the cantilever, which moves the magnet attached to its opposite end, which creates a current in the coils that is then sent to your preamplifier. In an MI or MP cartridge such as the MP-110H, there’s a third component: the “iron.” In an MI, coils and magnets are in fixed positions inside the cartridge body. As the stylus tracks the groove and moves the cantilever, the cantilever moves the iron, and the iron’s interaction with the magnet’s magnetic field induces a current in the coils. The late Joe Grado, who invented the MC cartridge, later abandoned it to concentrate on MIs, a dictate that Grado cartridges still follow.

The MP-110H’s magnet is made of samarium-cobalt, which generates a very strong magnetic field. The combination of permalloy iron and samarium-cobalt magnet produces a robust output of 5.0mV. 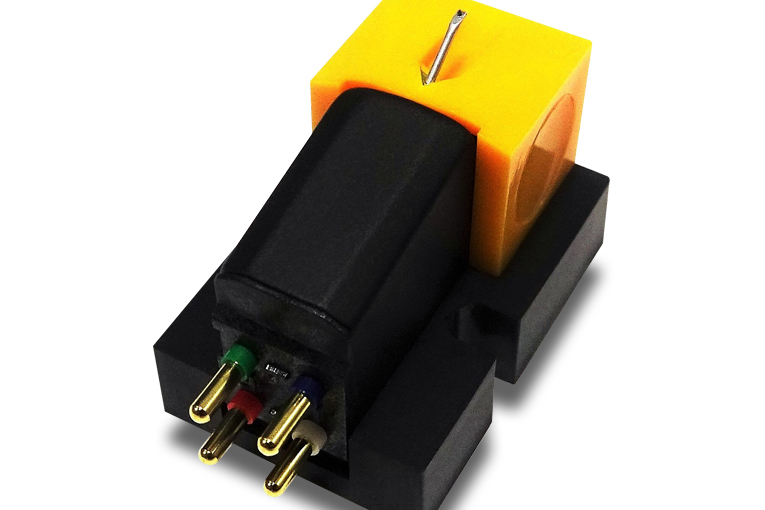 The headshell in which the MP-110H cartridge is mounted is of the Japanese-standard variety. Light but sturdy, it appears to be made of cast aluminum, and has a well-designed finger grip.

Installation couldn’t be simpler. Turn the lock nut on the tonearm of most Japanese turntables, remove the old cartridge, and mount the MP-110H. Easy-peasy. Although the pre-mounted MP-110H costs more than the headshell-less MP-110, buying the former eliminates any chance of botching the alignment of cartridge in tonearm, a very easy thing to do. I say the MP-110H is worth the extra $30. All that’s then left to do is balance the tonearm, adjust the vertical tracking and antiskating forces to 1.8gm, sit back, and listen.

On my Pioneer table, I needed to back off the antiskating force to about 1.5gm to obtain optimal performance. As my friend had already given the MP-110H Nagaoka’s recommended ten hours of break-in, I dove in.

The first tune I played was a usual suspect: “50 Ways to Leave Your Lover,” from Paul Simon’s Still Crazy After All These Years (LP, Columbia PC 33540). Recorded at one of New York’s best studios, A&R, the album was produced and engineered by a genius, Phil Ramone, and the sound is as good as nearly anything else that came out of the City in the 1970s. I was immediately struck by the crispness of the snare-drum rolls: There was no slop to the sound. The guitar part sounded remarkably natural, as did Simon’s voice. The bass line was hearty but not blowzy. There was a hint of sibilance in the high notes sung by the female backing singers, but only a hint. This is not an in-your-face recording -- it’s subtle, and that subtlety came through aces.

Next up was another Columbia album produced by Ramone: Billy Joel’s An Innocent Man (LP, Columbia QC 38837). I chose the up-tempo “Uptown Girl,” largely for its exceptionally percussive elements of a strong drum line and up-front hand claps -- it’s a workout for nearly any cartridge. Nor has every cartridge I’ve played it with been able to let all the band’s instruments through the clatter. Joel’s insistent singing powers through with almost any audio system, but his voice may not sound crisp.

I was pleased that the MP-110H did a good job with all the hoo-hah. The drum strokes and hand claps were reproduced with no overhang, and the instruments at the back of the mix made their presence known but didn’t sound at all strained. The voices -- including the backing singers’ -- had excellent presence. I expected to hear a lot of the upper-midrange sibilance I’d heard in the Simon track, but I didn’t. I’m not complaining.

I added some women’s voices to my playlist by playing two of my favorite songs from The Best of the Manhattan Transfer (LP, Atlantic SD19319): “Four Brothers” and “Birdland,” both with words by the talented Jon Hendricks, of Lambert, Hendricks & Ross, who recently died at age 96. In Jimmy Giuffre’s “Four Brothers,” the group’s four singers -- soprano, alto, tenor, baritone -- mimic the sounds of the four sax players of Woody Herman’s orchestra, as they recorded the tune in 1947. In “Birdland,” composer Joe Zawinul, of Weather Report, paid his respects to the 1950s Manhattan club whose frequent headliner was alto saxophonist Charlie Parker (“Bird”). (Years later, in his native Vienna, Zawinul opened his own club of the same name.) Both contain very fast, very staccato singing, and in most cases these recordings sound better on digital media -- a phono cartridge with a slow response will blur the words. That was one reason I went from a Shure M97HE to the V15 Type V-MR. 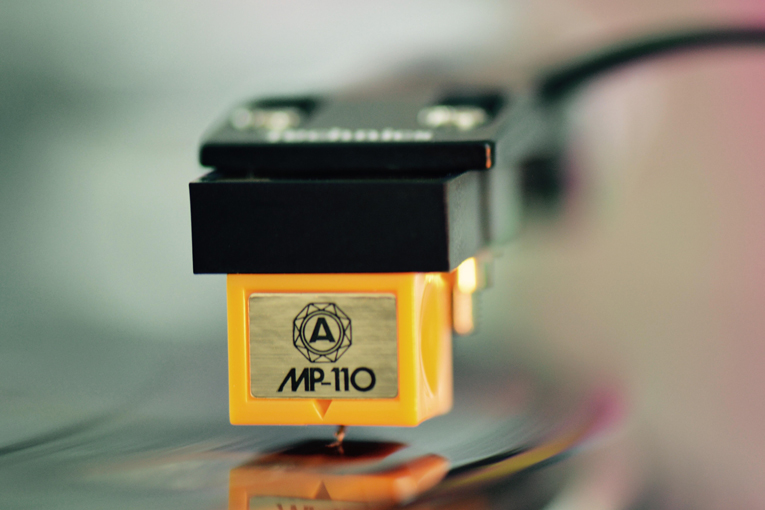 So I was amazed that the low-priced MP-110H did a better job with these tracks than several other cartridges I could name (the V15 is not one of those). And the voices in “Birdland,” which move around the soundstage, were well positioned. There was one downside: My copy of The Best of the Manhattan Transfer needs a good cleaning. It has some schmutz in the lead-in groove of “Birdland” that caused pretty significant noise in the left channel with the MP-110H. The noise was less apparent with my Grado Green cartridge ($95), but then the Green isn’t quite as nimble at tracing the maze of words -- it’s good but not astounding, as is to be expected from a lower-priced cartridge.

Sticking with jazz, I played a 1983 reissue of Mel Tormé’s Songs of New York (LP, Atlantic 80078-1), originally released in 1964: “Sunday in New York,” in which Tormé is accompanied by full orchestra. At a tracking force of 1.5gm, the recommended minimum, the sibilance was annoying. Returning it to 1.8gm markedly decreased the sibilance. The MP-110H revealed the old recording technique used for this recording: Tormé solidly at center, the orchestra to either side, rather as if the singer were the filling of an orchestral sandwich. Little if any surface noise was audible in the gulf between Tormé and the dueling string sections. I also heard very crisp highs, and natural-sounding bass.

Time for a woman’s voice: Linda Ronstadt singing “You’re No Good,” from her Heart Like a Wheel (LP, Capitol ST-11358). No sibilance here. And her band was spread out from far left to far right behind her, as it should be, in my opinion. Everything sounded right, including the solid bass line. The long, sustained violin at the end almost raised the hairs on the back of my neck -- always a sign that the sound is getting to me in a positive way. I really enjoyed this cut through the Nagaoka.

Feeling that a detour into something rockier was called for, I pulled out another longtime favorite: “I’d Love to Change the World,” from Ten Years After’s A Space in Time (LP, Columbia KC 30801). The opening acoustic guitar line was reproduced well-nigh perfectly, and the electric lead in the middle section seared through the speakers. Air-guitar city!

At one point I thought, “I suppose I ought to try the 1812 . . .” This would be the ultimate LP test: the 1979 recording, by Erich Kunzel and the Cincinnati Symphony Orchestra, of Tchaikovsky’s 1812 Overture (LP, Telarc DG-10041), with real cannon. For years, this LP and its famous predecessor, a recording of the work by Antal Doráti and the Minneapolis Symphony on Mercury Living Presence vinyl, also with real cannon, were the tests of how well a phono cartridge could track. Some cartridges of the early 1970s would just shoot off the platter at the first ka-boom. The MP-110H did much better. No, it didn’t track a couple of the blasts as well as my Shure V15 V-MR does (few cartridges do), producing some distortion, but it made it all the way through without embarrassing itself -- in itself, an accomplishment!

Despite the raves the Nagaoka MP-110H has gotten on many audio websites, it’s not a perfect cartridge, even for its price. It’s somewhat sensitive to dirt in the groove (something an elliptical stylus is supposed to minimize). It has a slight but noticeable bump between 3 and 5kHz, and a slight tendency toward sibilance in that range, mostly inhabited by high violins. Its bass performance was polite -- all there, but it didn’t reach out and grab me. To quote the Who, its sound wasn’t meaty, beaty, big and bouncy. On the plus side, its ability to track the vast majority of records was fine, and its overall sound compared well with cartridges I’m familiar with at or near its price, such as the Grado Labs Blue 1 ($125) and the Shure M97xE ($99).

I’m glad a number of distributors are now importing the Nagaoka MP-110H. It’s a solid performer with many pluses, only a few minuses, and it’s compatible with many current and vintage turntables. If you want a cartridge with extended but not overblown bass, a midrange that favors the higher side, and mostly silky highs, the MP-110H might just be the ticket.