Pro-Ject Audio Systems knows its customers well -- the Debut Carbon turntable ($399 USD), while not quite plug-and-play, comes with everything the aspiring vinyl-loving audiophile needs. And while not quite an exit-level turntable, its build quality tells me that Pro-Ject cares about the entry level of the market.

When I opened the Debut Carbon’s carton, I was reminded to throw nothing away, and to make sure all of the pieces, large and small, were actually included therein. The four rubber feet, motor, platter hub, and carbon-fiber tonearm with Ortofon 2M Red cartridge were all already installed on the heavy-duty plinth, which comes in seven colors (mine was in high-gloss black). I set the Debut on a level surface, threaded its drive belt around the platter hub and the motor capstan’s 33 1/3 pulley (there’s also a 45rpm pulley), and onto them gently lowered the sturdy metal platter and felt record mat. 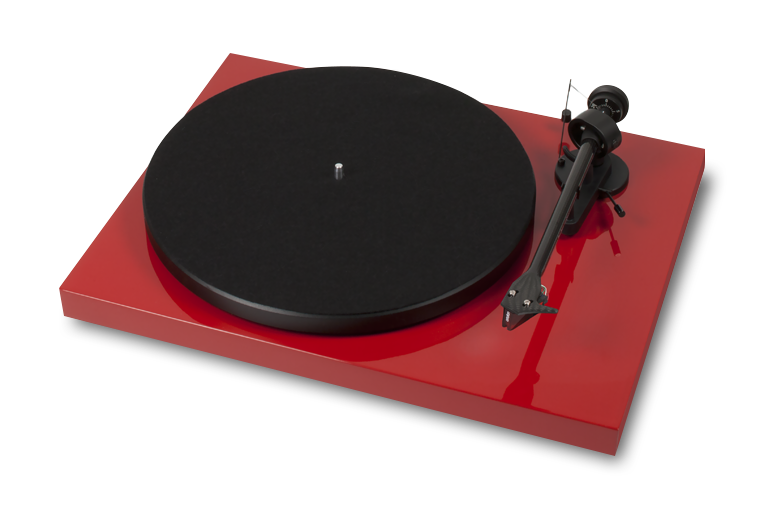 Pro-Ject touts the improvements in the quality of the Carbon’s platter and motor from the basic Debut. But while the hidden bargain of this package is the cartridge upgrade -- Ortofon’s 2M Red moving-magnet retails for $100 on its own -- it’s obviously the tonearm that Pro-Ject is most proud of. The use of carbon fiber for the armtube rather than, say, aluminum does seem to be an extravagance that would normally be reserved for higher-end models.

The first order of business was to balance the tonearm. I was obsessive in my attempts to get it perfectly right. I removed the cartridge headshell and slid the counterweight onto the rear end of the tonearm shaft. When the arm looked as level as I could get it, I turned the counterweight to zero it out before turning it to set the vertical tracking force. This procedure is carefully detailed in the Debut Carbon’s manual. But because I’d failed to hook up the antiskating weight, the tonearm skated away, moving across the record like a hockey puck on ice. Looping the nearly invisible fishing line over the stub at the back of the tonearm is delicate work, but once it was on, I really thought I had it. But when I again lowered the tonearm to the record surface by releasing the cushioned lift lever, the stylus only lightly bounced across the groove. Not enough downforce. So I balanced it again, and finally got it right. I still have flashbacks of anxiety.

For the vinyl neophyte, the processes of balancing and using a tonearm can be unpredictable and subject to trial and error, and I’m not certain my experience was helped by the Debut Carbon’s carbon-fiber tonearm, which is remarkably, unpredictably light. Despite trying to be careful, I’ve accidentally knocked it and sent it flying a few times, raised it too rapidly with the finger lift, or moved it too quickly by hand and sent it shooting away from my fingers. All heart-stopping moments. 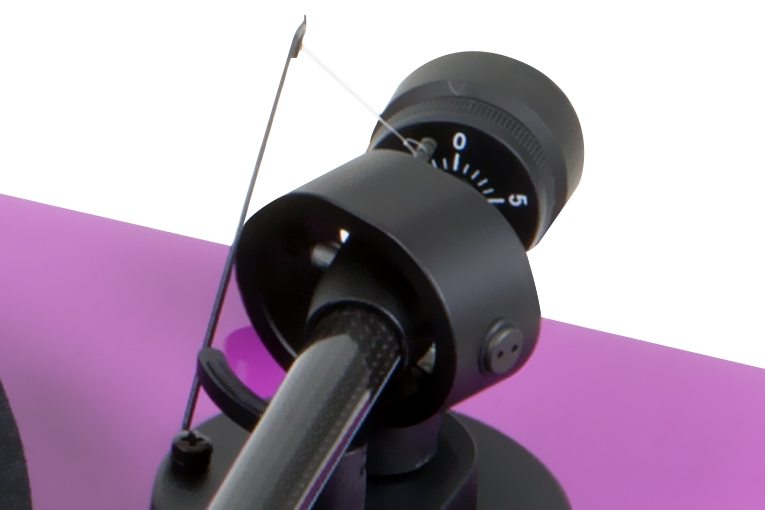 But with everything leveled and balanced, I fitted the Debut Carbon’s dustcover (included), inserted the power supply, and pushed the RCA plugs at one end of the substantial supplied phono cable into the turntable, and the RCAs at the other end into the phono inputs of a ca.-1985 Yamaha AX-500U integrated amplifier driving a pair of B&W DM302 speakers linked by 9’ runs of Element Cable Double Run speaker cable. Finally, I attached the turntable’s ground wire.

My reference integrated amplifier, the NAD D 3020, was designed for the 21st century and doesn’t have a phono stage. And although I paired it with NAD’s PP 2i phono preamp, the Yamaha AX-500U’s phono stage produced more gain, more excitement, and greater overall definition. From the Band’s self-titled second album (LP, Capitol STAO-132), the low notes from the bass drum, electric bass, and tuba, on “Across the Great Divide,” were carved out in space, and the blend of the voices was seamless. In the final track, “King Harvest (Has Surely Come),” Richard Manuel’s nervous vocal was prominently front and center, and Levon Helm’s drums had palpable impact. And in Robbie Robertson’s acoustic-guitar solo in “The Unfaithful Servant,” the Debut Carbon put me right next to the player to hear his sharp intake of breath mid-solo.

The more airy and open the recording, the more exhilarating it sounded through the Debut Carbon. Rod Stewart’s Gasoline Alley (LP, Mercury SR 61264) makes a big rock’n’roll sound, primarily with acoustic instruments. The fiddle in “Cut Across Shorty” was sharp, with vibrant attack. The transients were fast and aggressive in “You’re My Girl (I Don’t Want to Discuss It),” and the title track was snappy and exciting, thanks to the turntable’s liquidity and precise imaging. 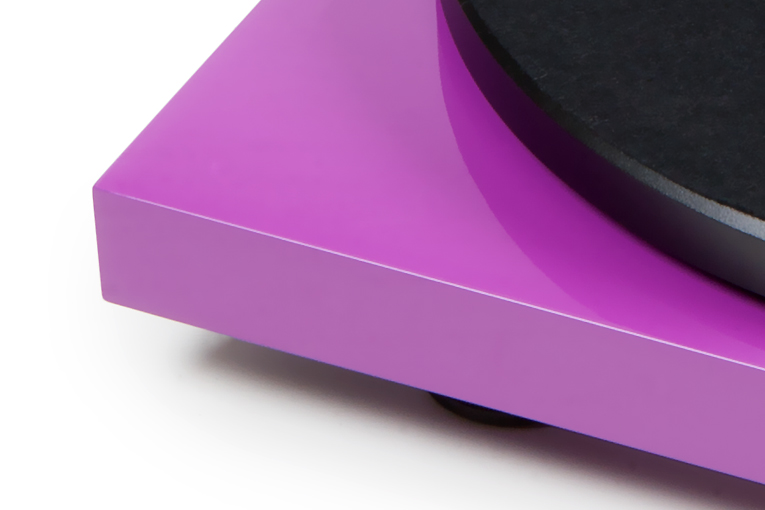 If the late 1950s through early ’70s represent a high-water mark for the analog recording of rock music, Bo Diddley was there at the beginning, and the Debut Carbon met Bo’s primal, essential rhythm on its own terms. I’ve been listening to his compilation The Chess Box on CD for years, but I’d never noticed its thin drum sound or its misplaced vocal emphasis. From another compilation, Got My Own Bag of Tricks (2 LPs, Chess 2 CH 50 030), the organic power of the track’s original mix was honored as the Debut Carbon retrieved massive amounts of low-level detail. “Who Do You Love” had slam and punch, and the Debut Carbon swung “Bo Diddley” with drive, focus, and purpose.

Speaking of swing, it was the devout wish of the early Rolling Stones to play with as much panache and authenticity as the Bo Diddley band, and by 1965 and their fourth album, Now! (LP, London LL 3420), they were right there. Their version of “Mona” kicks, thanks to Charlie Watts’s precise drumming, which the Pro-Ject rendered with touch and impact. Brian Jones’s slide guitar in “Little Red Rooster” was crystalline and bitey, and Mick Jagger’s singing in “You Can’t Catch Me” and “Down the Road Apiece” was aggressively nasal and compelling.

Fast forward to 1988 and Keith Richards’s first solo album, Talk Is Cheap (Virgin 7 90973-1). It’s the sound the Stones grew into, with plenty of Keef’s unflanged, un-wah-wahed guitar and unmistakable riffing. The contours of “Take It So Hard” were big and round, sonically poised, and free from harshness. The Debut Carbon gave “It Means a Lot” rhythmic stability, and put the clamps on it for tight, clean bass. The Pro-Ject’s reproduction of softer material, such as “Locked Away,” was appropriately delicate and refined, and paid close attention to the song’s pace and grooving nonchalance. 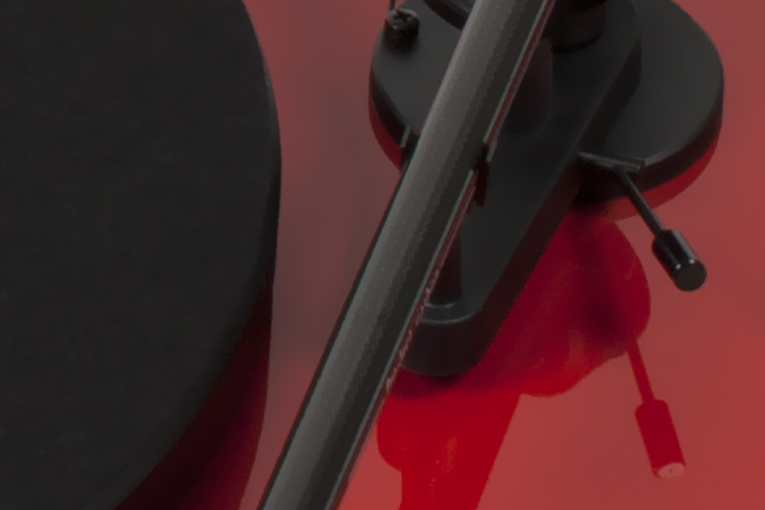 In 1985, Robert Cray was refining his contemporary blues sound in False Accusations (LP, Hightone HT 8005), recorded on the cusp of CD dominance yet with very much a vinyl mindset. Throughout this album the midrange is velvety and luscious, and the Debut Carbon effortlessly communicated it in Cray’s smooth voice and plangent guitar stings. The forward momentum of “Porch Light” was fast and clean, and the pounding rhythm of “Playin’ in the Dirt” was handled with impressive soundstage depth and airy highs. The tense suspense of “The Last Time (I Get Burned Like This)” was involving, with a great deal of transparency, while the Debut Carbon conveyed the feeling of loss evoked by “She’s Gone” with enough grace to make me feel the singer’s pained resignation.

I bought all of these LPs used, some in record shops and a few via the Internet, and all were in good shape with the expected amount of surface noise, pops, and clicks. A copy of Captain Beefheart’s Doc at the Radar Station (LP, Virgin VA 13148), bought through eBay, arrived visibly warped -- but the Debut Carbon tracked it just fine, even as I watched its tonearm rise and fall each time the warp came round. The Debut Carbon dealt with Beefheart’s fractured rhythms and unhinged vocals with as much aplomb as it did the distorted vinyl. “Ashtray Heart” was reproduced with a vicious intensity, “Hot Head” was stunningly clear and multicolored, and “Sheriff of Hong Kong” was an adrenaline rush.

I compared the Pro-Ject to a Rega Research RP1 ($449). The Debut Carbon turned out to be superior in every way. The Rega’s plinth carries the residue of chipboard. Its interconnects are factory-fixed and utterly basic, though it also does away with the inconvenient ground wire. The Rega’s platter is lighter, and even the hinges of its dustcover are plastic, rather than the metal hinges of the Pro-Ject’s cover.

Of course, Rega claims that these concessions were made to maintain sound quality while keeping costs down. And while it’s true that the Rega never gave me a problem with skating or tracking force, its supplied cartridge, Rega’s own Carbon, didn’t seem able to deliver the sonic impact of the Ortofon 2M Red.

The Rega neutered and rendered uninvolving the title track of George Thorogood’s Move It On Over (LP, Rounder 3024). His gruff voice and buzz-saw guitar, and Jeff Simon’s thumping drums, had none of the acuity, punch, or magic I want and need from a turntable, and that the Debut Carbon supplied when playing the album. The Rega gave me nothing I couldn’t get from CDs or even MP3s. And that’s not a good incentive for going all in on building an LP collection in 2017.

For over a decade now, I’ve thoroughly enjoyed my digital library via various Apple products. But nothing in my listening room has ever sounded as good as Pro-Ject Audio Systems’ Debut Carbon turntable playing 40-year-old LPs through a 30-year-old integrated amplifier driving 20-year-old bookshelf speakers. The Debut Carbon is meticulously designed, from packaging to performance. 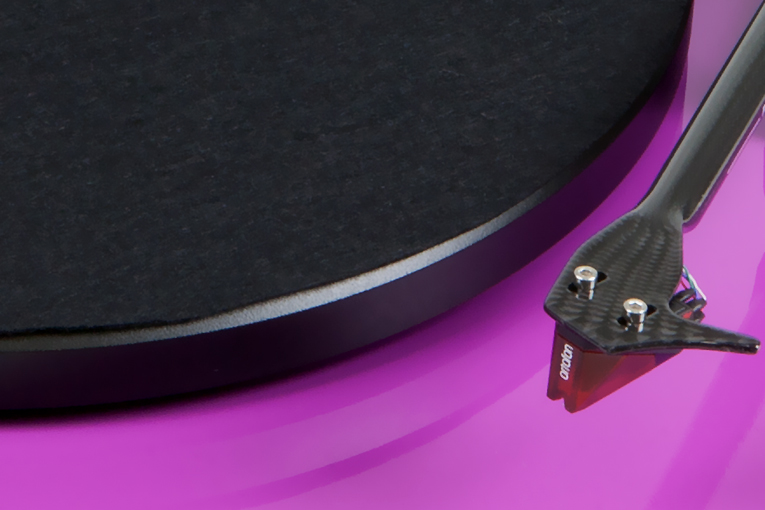 Music through the Pro-Ject Debut Carbon and Ortofon 2M Red cartridge had palpable dynamic range. Instruments were better separated, and room-filling volume was more easily handled and realized. This combo laid down a foundation from which the music bloomed vertically and rolled forward, left, and right, to fill my listening room with warmth and presence. It moved music out of the background to reclaim a primary place in my life.