Serendipity is, by definition, a valuable thing. When I was to review Onkyo’s new direct-drive turntable, the CP-1050, the company rep suggested I try it with Onkyo’s A-9010 integrated amplifier-DAC ($349 USD). Lo and behold, the amp performed quite well. So while the A-9010 at first just came along for the ride, I felt it deserved its own review.

At first glance, the Onkyo A-9010 might almost be a product of the late 1960s and ’70s -- hi-fi’s Golden Age. It reminds me of some of the excellent Kenwood gear from that era. At the center of the front panel is a very large volume knob, and at far left a good-size On/Standby pushbutton; between and below these are knobs for Bass, Treble, and Balance. To the right of the volume knob is a row of eight tiny LEDs, one for each input, followed by an Input selector. Below these are pushbuttons labeled Direct (for bypassing the tone controls) and Loudness (to activate the loudness contour). To their right are a 1/8” (3.5mm) input for an iPod or the like and a 1/4” (6.5mm) headphone jack.

The A-9010 has five analog inputs: one phono, four line-level. The US/Canada version has two digital inputs, one each for optical and coaxial connections. These feed a Wolfson DAC that can decode digital signals of resolutions up to 24-bit/192kHz.

The rear panel is pretty simple: a pair of RCA jacks and ground post for the phono input, the four pairs of Line In inputs (RCA), and a Line Out pair (RCA) to feed an analog recording device. Above these are two switches for operating connected Onkyo components by remote control, plus the coax (RCA) and optical (TosLink) digital inputs. Near the middle of the panel are two pairs of effective but unfancy five-way speaker connectors. At the right are a 3.5mm jack for the remote control in/out and a hardwired power cord.

The A-9010’s specs are straightforward. It’s no powerhouse, but neither is it a 97-pound weakling. Its FTC output at 1kHz is a claimed 44Wpc into 8 ohms or 70Wpc into 4 ohms. This should make it more than powerful enough to drive relatively efficient speakers -- say, 88-92dB/W/m -- in a reasonably sized listening room. The A-9010 includes Onkyo’s Wide Range Amplifier Technology (WRAT) output stages, which use a low-negative-feedback distortion-reduction circuit. The signal/noise ratios are 92dB for the line-level inputs, 78dB for the phono input -- both are adequate. The ranges and turnover frequencies of the tone controls are fairly typical: Bass, ±10dB at 100Hz; Treble, ±10dB at 10kHz.

The supplied remote-control handset -- batteries included! -- isn’t the most deluxe on the market, but did its job well. It’s mostly plastic, but light and well laid out. At top left is the On/Standby button, and to its right are two Input Selector buttons. Below these are 14 buttons for selecting CD tracks or tuner presets. Just to their right are buttons for Mute and Volume up/down. Below these, but of no consequence to the A-9010 itself, are a circular array of direction buttons with Enter at the center, plus the usual Stop/Play/Pause, etc. controls, along with Dimmer and Display (for an Onkyo disc player). 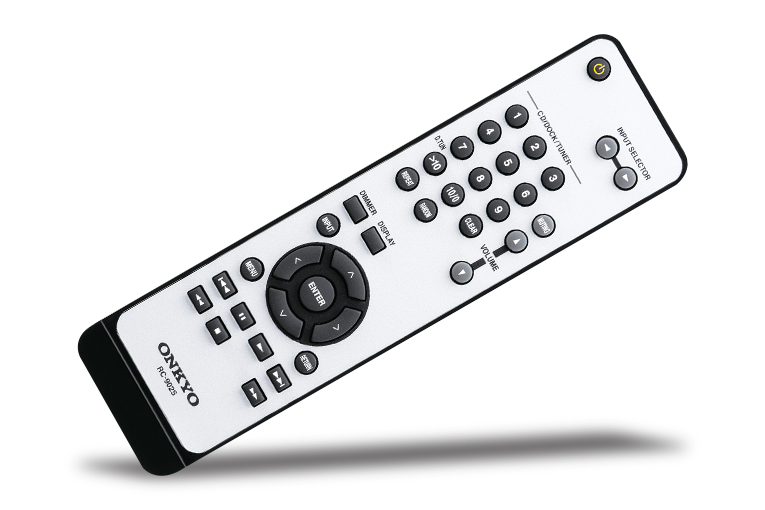 Kudos to Onkyo for the owner’s manual. It’s helpful and well written, especially its explanation of the rear-panel switches. The A-9010 is warranted for two years, parts and labor.

I mentioned above that the Onkyo A-9010 should be a good choice for efficient speakers. My Acoustic Energy Reference 3s, specced at 90dB/W/m, showed no signs of distortion or distress when driven -- often at quite high levels -- by the A-9010. I was impressed by how much power the A-9010 delivered.

The first recordings I listened to were played by my computer via JRiver Media Center 19, beginning with the Allegro Affetuoso (La Notte) of Ole Bull’s Concerto Fantastico, with violinist Annar Follesø and Ole Kristian Ruud leading the Norwegian Radio Orchestra -- a track selected by our Editor-in-Chief, Jeff Fritz, for the 2L-TWBAS 2012 Sampler (24-bit/176.4kHz FLAC, 2L/SoundStageRecordings.com), and downsampled by my DAC to 24/96. The bass slam was tremendous! At the same time, the solo violin was delicately detailed and right out front, if a bit shrill on the highest notes. Overall, the soundstaging was excellent: detailed and properly scaled.

Next up: The final movement, Presto -- Allegretto con variazioni, of Beethoven’s String Quartet No.10 in E-Flat Major, Op.74, “Harp,” performed by a Norwegian group, the Engegard Quartet -- another of Jeff Fritz’s selections for the 2L-TWBAS 2012 Sampler. This very intimate recording was made in a small space -- the players sound as if they’re in your listening room. This effect is accentuated by the very detailed recording of the players’ attacks and releases -- along with a great performance. The A-9010 showed its stuff, capturing the space accurately without curtailing detail. 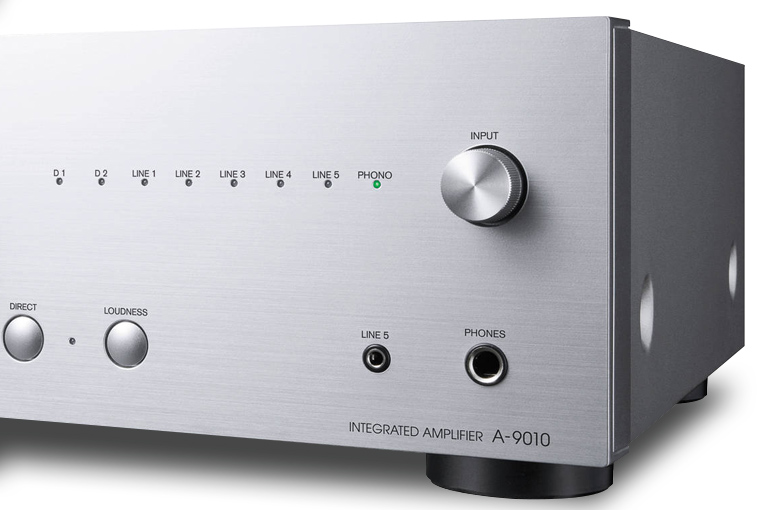 In 1969, Quincy Jones and an all-star group recorded a great jazz standard, Benny Golson’s “Killer Joe,” for Jones’s album Walking in Space (16/44.1 WAV, A&M). These sessions were very much a throwback to ’60s recording techniques: nearly all instruments are at the left or right edge, with not much going on in the middle other than the bass and drums. Nonetheless, the A-9010 reproduced it all quite well, putting out a very cohesive rendering of the entire big band, again delivering excellent bass punch, along with a very natural midrange sound for the background voices.

Through the A-9010 I enjoyed Steve Allen’s “This Could Be the Start of Something Big,” from Count Basie and his Orchestra’s This Time by Basie, with arrangements by Quincy Jones (16/44.1 WAV, Reprise). In my not-so-humble opinion, the Count led the greatest big bands of all time, and this album is one of his best. On this cut, the sax solo is out of this world -- detailed, yet driving at the same time. The rest of the band is right behind him, and unbelievably tight. The A-9010 did a great job here, presenting the entire group and the soloists with no audible colorations.

I’m a big fan of John Pizzarelli -- to me, he’s just about a jazz-guitar god -- and his version of “Don’t Get Around Much Anymore,” from My Blue Heaven (24/96 FLAC, Chesky/HDtracks), is a gift. The Onkyo reproduced Pizzarelli’s seven-string guitar with extreme detail and delicacy. This is another track that puts the performers in your listening room, and with it the Onkyo provided excellent sound, especially the clear-and-present sounds of Pizzarelli’s guitar and Dave McKenna’s piano. Sheer magic.

“Money for Nothing,” from Dire Straits’ Brothers in Arms (16/44.1 WAV, Warner Bros.), is a standby for me. This time, I played it at a ridiculously high level (wife was at work; neighbors too), but the A-9010 handled everything just fine. It delivered great bass punch on the opening drums, and reproduced the initial guitar riff with crisp detail. The entire recording was provided with a fabulous soundstage deeper than I’m accustomed to hearing from this track. Any amp that can pull so much from “Money for Nothing” is OK by me.

Kim Carnes’s recording of “Bette Davis Eyes” is one of my favorite tracks, if only for the eerie mood set by the instrumental background. This mastering, from the compilation Like, Omigod! The ’80s Pop Culture Box (Totally) (16/44.1 WAV, Rhino), sounded great from the get-go through the Onkyo. The soundstage, in particular, was quite wide, though it could have been a bit deeper. Carnes’s smoky voice was clear, and the accompanying transients, of which there are many, were reproduced with crispness by the A-9010. 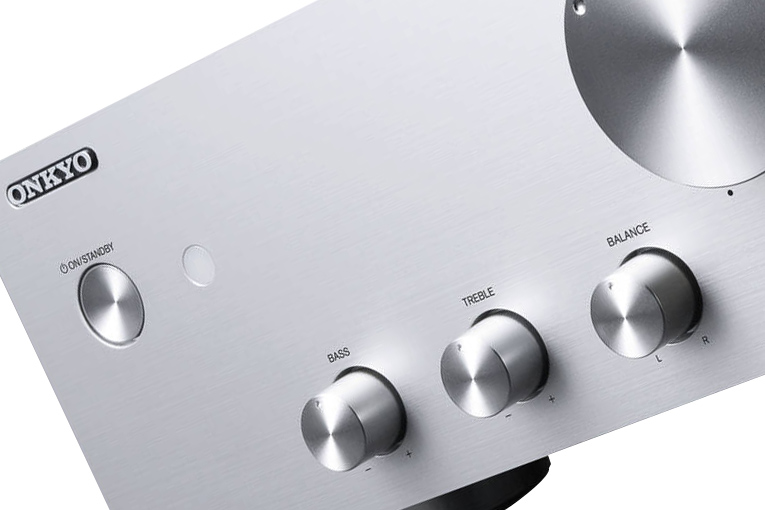 I thought I’d try a couple LP cuts. The first favorite I selected was “Finally Found a Reason to Live,” from Art Garfunkel’s Fate for Breakfast (LP, Columbia JC 35780). My reaction to its sound through the A-9010? “Glorious! Great!” There was fantastic detail in Garfunkel’s voice and in the accompanying instruments; their placements on the soundstage were exemplary and the depth was as good as any I’ve heard from any amplifier’s reproduction of this recording.

To try something with a few more transients, I pulled out The Best of Earth, Wind & Fire and played “Getaway” (LP, Columbia FC 35647). The bass surprised me by not being as in-my-face as with other amplifiers. But, still, it fit. The detail on the trumpets, in particular, couldn’t be beat. I loved the wide but full soundstage and the excellent depth offered by the Onkyo.

In terms of the basics, my Linn Majik-1P ($1400 with phono stage, when available) and the Onkyo A-9010 aren’t that different. Both are moderately powered integrated amps: the Linn puts out 30Wpc at 8 ohms, but punches well above its class. Both have multitudes of analog inputs; the Onkyo ups the ante with its digital ins. I tried several digital sources, through both the Onkyo’s analog and digital inputs, and the A-9010 held its own against the far more expensive Linn.

What surprised me, though, was how well the Onkyo’s phono section did against the Linn’s. With the Art Garfunkel and Earth, Wind & Fire cuts, the A-9010 sounded nearly as silky and smooth as the Majik-1P. I think the Linn was ever-so-slightly more detailed, with a minimally wider frequency response and a greater signal/noise ratio, but I’m splitting hairs. The Onkyo’s phono stage sounded better than it had any right to, given the amplifier’s low cost. And with the EW&F cut, the Onkyo strutted its punch as well as the Linn.

My Cambridge Audio 650C CD player has a coaxial digital output, so I compared the sound of its analog and digital outputs using the A-9010’s DAC. There wasn’t a huge difference -- both the Onkyo and Cambridge have Wolfson DACs. But, over time, I found that I enjoyed listening via the Cambridge’s digital output just as much.

For instance, I directly compared the sound of “Better than Anything,” from singer Claire Martin’s The Waiting Game (CD and 16/44.1 WAV, Honest/Linn CD 5018), from the Cambridge’s optical output via the A-9010’s DAC, vs. the CD player’s analog out. Both offered an excellent soundstage with good width, but it was slightly deeper with the digital signal -- Martin’s voice, the electric guitar, and the bass weren’t on top of one another quite so much as via the analog output. Also, through the digital input the piano sounded absolutely exquisite; via the analog, it was merely very good.

While you can spend a whole lot more on an integrated amplifier -- especially one with a built-in DAC -- I wouldn’t overlook the Onkyo A-9010. It has a multitude of analog inputs, including a fine phono stage; it has two digital inputs; and it sounds great -- much smoother than I expected for $349. It can drive nearly any set of reasonably efficient speakers to adequate levels, and has all the inputs most people might want. I believe the Onkyo A-9010 is a screaming bargain for anyone looking for a flexible, affordable, moderately powered integrated amplifier that will offer a lifetime’s worth of music enjoyment.