These days, there are lots of integrated amplifiers available for under $2000. Many are solid-state, some use vacuum tubes, and a few harness both technologies. Rogue Audio’s Sphinx is a member of the last group.

The Sphinx ($1295 USD) was born in Brodheadsville, Pennsylvania -- about two hours from my apartment in Philadelphia -- and most of its parts are made by US suppliers. At 25 pounds, the 15.5”W x 5”H x 17”D Sphinx feels solid, but is easy to unbox and maneuver. The amp, available in black or silver, has an industrial, craftsmanlike vibe. This is not to say that it’s not well made, but I got the impression that the thick aluminum faceplate and trio of machined knobs were appropriated from a 1970s-era receiver. Rogue goes old-school here, and a glance at the Sphinx’s innards made it clear that it’s not just an aesthetic thing.

The amplifier’s output stage is pure class-D, with a pair of UcD180HG chips sourced from Hypex. As will be explained anon, these Hypex chips sound a bit different from the Bang & Olufsen ICEpower class-D chips I’ve heard. The Sphinx offers 100Wpc into 8 ohms, or about 175Wpc into 4 ohms, either at 1% distortion. The outputs are run without regulation, so the power on tap may vary with the voltage coming from your wall socket. Continuous current rings in at around 7 amperes, via the help of a bespoke 375VA toroidal transformer and a linear power supply. The damping factor of the amplifier section is admirably high -- more than 1000 -- which ensures that the speakers’ woofers will be kept under tight control. And class-D amps’ high efficiency -- around 90% -- means that they do well in small packages, obviating the need for a monstrous chassis bristling with unsightly heatsinks. This is evidenced by the Sphinx’s lightness and the single, small, meshed vent on its top panel.

The Sphinx’s preamplifier section makes use of two Russian 12AU7 tubes. Rogue claims that the distortion added by the tubes is quite small, and not appreciably different from that found in all-solid-state designs. While several companies make class-AB integrated amplifiers that use vacuum tubes, I’m not aware of one that marries tubes with a class-D design. In my mind, it’s an elegant solution. While switching amps have matured a lot in recent years, to my ears they’re still mired in adolescence: growing but still a bit gawky; in a word, imperfect. I find that class-D has a characteristic sound: clear and quiet, but often sounding thin through the midrange, as if singers and instruments had gone on a diet. Bass seems to get lost in translation, with low frequencies noticeably abbreviated. Overall, class-D sounds a bit etched -- mechanical, artificial, and decidedly not immersive.

The addition of tubes should serve to inject the sterile sound of class-D with a shot of vitality. Whenever I hear a system that includes tubes, I really can hear the tubes -- they tend to fatten the midband and soften things overall, which lends the sound a healthy dose of romance. I find that all-tube systems emphatically impose themselves on the source signal --- everything takes on a cloying, syrupy quality. But tubes in the context of a high-quality, class-D power amp? That has real promise.

The Sphinx channels this marriage through three pairs of gold-plated RCA input jacks with an input sensitivity of 1.0V RMS, as well as a moving-magnet/moving-coil phono section for high-output cartridges. Phono -- definitely old school. Fixed and variable RCA outputs allow the Sphinx to be used with another amplifier, or with a subwoofer. A discrete headphone amplifier is included, with a single, front-mounted 1/4” jack. A detachable IEC power inlet permits use of third-party power cords, if that strikes your fancy. There is also a pair of simple gold-plated binding posts.

The Alps volume potentiometer is a nice touch at the Sphinx’s asking price of $1295. That said, the gain was set a bit high for my taste. The volume level scaled quickly -- the Sphinx’s dial never broke 11 o’clock during its stay with me. This wasn’t much of a problem if I used only the front-panel volume knob, but when I used the optional remote control ($100), I could never find the level I was looking for -- I always had to get up and manually fine-tune the knob, which sort of defeats the purpose of a remote. And the remote, while robust -- it’s shaped from a massive, single piece of aluminum -- has only a volume control. There’s no room for an input-select, mute, or power button. These omissions are hardly criminal, though greater functionality from a $100 remote would have been welcomed into my girlish but deeply appreciative arms.

The Sphinx didn’t entirely live up to its name. It wasn’t enigmatic in the way that the best solid-state designs can be -- which is to say, thoroughly unremarkable in their sound. Rather, it cleverly trod the high wire between the grossly rich liquidity of all-tube integrateds, and the at times boringly uninvolved sound of solid-state. This quality, then, is very sphinx-like. Like the mythical, half-beast, half-human creature for which it’s named, the Sphinx embodies the best of two worlds. The soul of the music that tubes seem so adept at imparting is married to the high-efficiency brawn of a resolving class-D amp. The benefits of both are retained and the weaknesses offset, with a lovely synergy in all that remains. Mark O’Brien, proprietor of Rogue Audio, told me that one of his customers uses a Sphinx with speakers costing $50,000/pair. Having used the Sphinx with the Vivid Audio V1.5 ($7500/pair) and Cabasse Pacific 3 ($16,000/pair), I was in no great hurry to hook up my reference Hegel Music Systems H300 integrated amplifier-DAC. Old school or not, the Sphinx was quite the sophisticated character.

To begin, I streamed Mumford & Sons from my laptop via USB to a Benchmark DAC1 USB digital-to-analog converter, which was in turn wired to the Rogue’s RCA-only inputs. Man, could the Sphinx sing through the midrange. There was such presence, such a visceral feeling to the English group’s music that I couldn’t help but applaud. No, the Rogue wasn’t as resolving as my far more expensive Hegel, but in some ways, it did a better job of reproducing a flesh-and-blood performance. 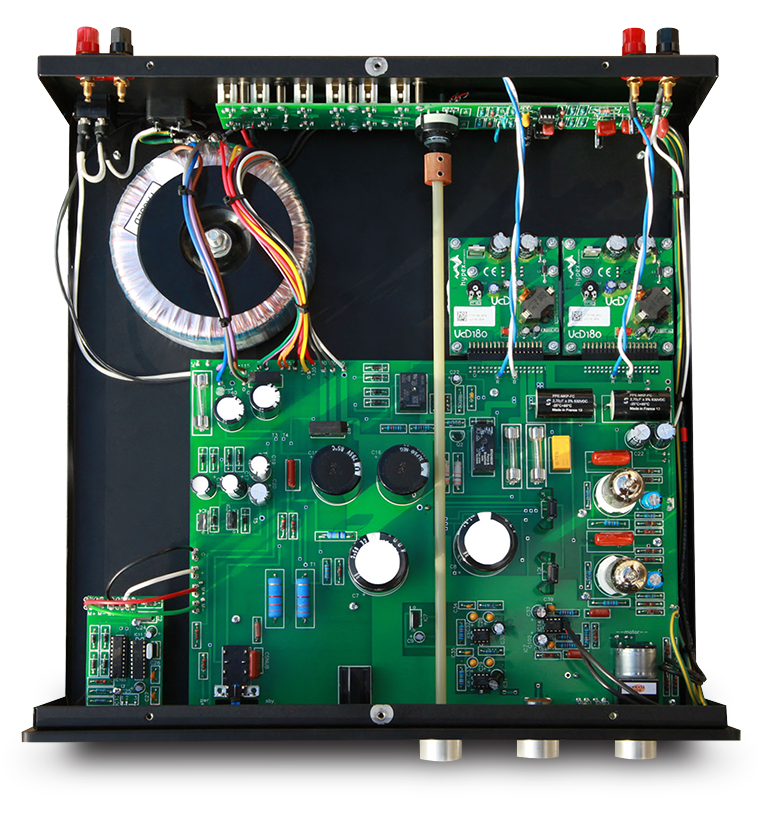 For example, in Erasure’s “Sono Luminus,” from their eponymous 1995 album (16-bit/44.1kHz ALAC, Elektra), the beautifully recorded, sultry voice of lead singer Andy Bell croons its way into the foreground as the track opens. With the Sphinx in play, there was a fullness, a vivacity to Bell’s voice that even the Hegel couldn’t quite capture. Without question, this could be chalked up to those dastardly tubes, which, despite my best efforts to detest them, I found myself totally enchanted by. I’m not sure if the Sphinx was more accurate than the Hegel -- I’d probably be wading into a metaphysical swamp if I asserted that it was -- but I feel secure in saying that I enjoyed the Rogue’s sound more.

I like challenging equipment with large-scale orchestral music because it’s so demanding. Microdetail, macrodetail, overall soundstage space, transparency, dynamic range, instrumental timbres and tonalities . . . the list goes on. Consider Star Trek VI: The Undiscovered Country, a woefully underappreciated film featuring Academy Award winner Christopher Plummer as a Shakespeare-quoting Klingon. While Cliff Eidelman’s score (16/44.1 ALAC, MCA) blatantly rips off Gustav Holst’s The Planets -- specifically, Mars, The Bringer of War -- he does well to marry a 20th-century classic with 23rd-century celestial awesomeness. The best example of this, “The Battle for Peace,” with Holst’s theme underlying an array of brass instruments brashly announcing themselves throughout, presents a challenge to any amp to keep up with the wide dynamic swings. The Rogue’s 100Wpc were more than up to the task, with nary a hint of distortion -- even when my neighbors could no doubt distinctly hear the U.S.S. Enterprise-A getting hammered by a volley of photon torpedoes. And it was distinct. The class-D Hypex chips recovered a healthy amount of low-level detail, such as individual performers’ breathing to the xylophone at the rear of the recording space, all while remaining smooth and engaging. Admittedly, the recording space wasn’t reproduced to quite the expansive degree that I’m used to hearing through my Hegel H300, but it hardly sounded closed-in.

Robyn’s “Dancing On My Own (Radio Version)” was even more compelling. The off-the-wall Swede’s Grammy-nominated tune, from her Body Talk (16/44.1 ALAC, Island), is generic in the sense that it’s heavily processed, greatly reliant on simple synth beats, and plays on the unoriginal theme of young heartbreak. The platinum-haired performer sings her electro-disco anthem with such verve that it’s pretty difficult not to be moved by it. The track highlighted another aspect of the Rogue’s sound: a slight edge. Transients and sibilants rang through with a little more clarity than I’m used to hearing from pure solid-state designs. I suspect this was the power-amp section again; I’ve heard a similar if more pronounced character from other class-D amps. That it was subtler in the Rogue’s instance could be due to the Hypex chips, as opposed to the more common Bang & Olufsen chips, or to the pair of tubes in the preamp stage, or to a combination of the two. I can say that I appreciated it, however.

Arcam’s A19 ($999) offers an interesting point of comparison between affordable integrateds. It has a remote control (included), a phono connection, six RCA inputs, two RCA outputs, a headphone amplifier, and a trigger input that can be used with Arcam’s r-series models. While similarly featured, the Arcam is a more modern, more cultured-looking product than the Rogue Sphinx. Its volume control is more compliant, and its remote is fully featured. It also has an adjustable digital display. However, the Arcam’s class-AB amplifier section musters only 50Wpc into 8 ohms -- half the Sphinx’s power output.

The two models sounded different. Whereas the Sphinx had an immediate, palpable presence, the Arcam had a more relaxed sound. It comes across as less lively than the Sphinx, even if it’s every bit as resolving. This is in part due to the absence of the Sphinx’s transient/sibilant edge. The A19 sounds smoother across the audioband, and I suspect is the more tonally neutral. Moreover, its preamp section is, predictably, quieter than the tubed preamp in the Rogue. Yet despite all this, I found that the Sphinx provided a more engaging listening experience than the A19. I happily partnered the Rogue with outrageously expensive speakers because, despite its modest asking price, it made the music come alive for me. The Arcam appeals to my sensible side for to its high levels of measured performance and practicality, but it didn’t excite me as much. And isn’t that the point of spending this much on a piece of stereo equipment?

Rogue Audio's Sphinx is a unique quantity. My gripes about the volume and remote turned out to be the only ones I could hold against the Sphinx, even after several months of use. Once the volume was set, I was pretty freaking content with what followed. Its industrial feel and old-school appearance belie just how intimate a sound it can produce. It toes a fine line between offering the musicality of tubes and the efficient accuracy of solid-state. The Sphinx made everything I played through it sound compelling. Yes, you could spend more for an integrated amp that offers more power or higher performance. But on the scale of musical enjoyment per dollar spent, I found Rogue Audio’s Sphinx to score very high. Value never sounded so damn good.