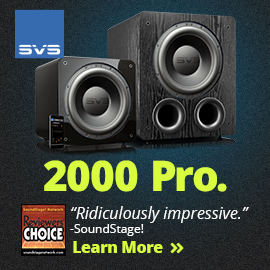 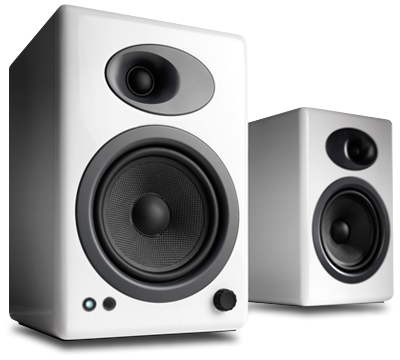 It’s curious to me that, as a generality, the more money you spend at a restaurant, the less you get. Yes, the coeur de gigot d’agneau en gasconnade and accompanying Bordeaux performed the most tuneful tandem that my taste buds will witness for the foreseeable future. Yes, my plate’s presentation was more artfully done than I could have managed on my own. And most important, yes, two hours later I was once again hungry, my wallet felt uncomfortably light, and I experienced a growing sense of guilt and regret. I imagine that, for many, this kind of frivolity is reserved for the most special of occasions, infrequent events in the repetitive mundanity of daily life. In contrast to such transient moments of profligacy, I find that I derive the most pleasure from more utilitarian investments: those marked by a maximization of value of which Jeremy Bentham would be proud.

Apropos of this philosophy, it’s worth noting that the modest entryway to high-end audio is crowded with false prophets who promise high performance and convenience at low prices. More often than not they fully deliver neither, and the design compromises of a given product overshadow any apparent strengths. The folks at Audioengine, however, have exhibited a knack for producing loudspeakers that marry quality and convenience at the expense of nothing. It’s as if their audio engineers and their MBAs actually bothered to ask not only what consumers wanted and how much they were willing to spend for it, but also how the product would be used day to day. Commonsense stuff, this -- and yet remarkably uncommon.

The Audioengine 5+ (or A5+) powered loudspeaker is an update of the company’s popular 5 (or A5). For the list price of $399 USD per pair, you can choose between sensible finishes of Satin Black or Hi-Gloss White. My review samples were layered in a highly attractive Solid Carbonized Bamboo, which adds $70/pair. Far from generically painted medium-density fiberboard, the pressure-heated finish on the 10.75" x 7" x 7.75" 5+ wouldn’t look out of place on speakers retailing for closer to $1000/pair.

More impressive than the finish, however, is the attention to detail that pervades all aspects of the 5+’s appearance and functionality. The 5+s don’t come with grilles, so Audioengine covers each in a microfiber bag, to keep drivers and finish from harm in transit. Also included are 12.3’ of 16-gauge speaker wire, a detachable power cord, a 6.5’ stereo mini-jack cable for use with an MP3 player or smartphone, a 6.5’ RCA-to-RCA audio cable, a setup guide that’s laid out in clear and simple fashion, and a credit-card-sized remote control with Power, Mute, and Volume controls.

The 5+ has a proprietary 0.8" (20mm) silk-dome tweeter with neodymium magnets, crossed over at 2.6kHz to a 5" Kevlar woofer; piercing each rear panel is a long, narrow port. The 9.6-pound right speaker contains no amplifier, with only a single set of gold-plated binding posts that link the included speaker wire to the active left speaker. The 15.4-pound left speaker contains a pair of 50W class-A/B amplifiers with a relatively large heatsink on the rear panel. To the right of the heatsink are, from top to bottom, a stereo mini-jack input and USB port (power only), pairs of RCA audio inputs and outputs, output binding posts to the right speaker, a Power switch, a voltage selector (120 or 240V), and an AC input. On the front of the left speaker is an infrared port for the remote control, a small white light, and a volume-control knob. The light is steadily illuminated when the speakers are on, and slowly pulses when they sleep. For the absentminded, like me, the 5+s helpfully put themselves to sleep after 30 minutes of idleness.

Even more thoughtfully, Audioengine covers the bottom of each 5+ with foam isolation pads that grip without sticking, and have 1/4" screw inserts for mounting the speaker on a stand. To further convince potential buyers to part with their money, Audioengine offers free shipping (as they do with all their products) when the speakers are ordered directly from their website, a 30-day money-back guarantee if you’re not satisfied with them, and a three-year warranty if you are.

Effing hell. Even if the 5+s sounded no better than middling computer speakers, based on the aforementioned features, I would have difficulty not recommending them. But their specs promise more than middling sound. The 5+ has a claimed frequency response of 50Hz-22kHz, ±1.5dB, and total harmonic distortion of less than 0.05% -- remarkable for speakers that start at $399.

To provide the 30-50 hours of burn-in called for in the 5+’s manual, I placed the speakers atop my kitchen cabinets and, over the course of some six weeks, played MP3s from my smartphone via the included stereo mini-jack cable. Since these little guys were powered and all the cords I needed were kindly provided, my Krell KAV-300il and Musical Fidelity M6 500i integrated amplifiers sat unused when I set up the Audioengines for a more thorough evaluation. So did my Mirage OMD-28 speakers and Dynamique Audio and Nordost (mostly; see below) cables. I placed the 5+s 5’ apart atop generic 24"-tall speaker stands, plugged the included RCA cables from the left 5+ into my Benchmark DAC1 USB digital-to-analog converter, and a TosLink cable from the Benchmark into my Apple AirPort Express, which allowed me to wirelessly stream my library of Apple Lossless and AIFF files from my MacBook Pro laptop via iTunes. The speakers were toed in so that tweeters’ axes met just behind my head, 10-11’ from where the 5+s sat.

All the work that seven-year-old Audioengine put into making the 5+ user-friendly would be for naught if they sounded mediocre.

Hans Zimmer’s soundtrack disc for The Dark Knight (16/44.1 ALAC, Warner Music) offers a combination of heavy synthesizers and strings that challenges most speakers, and is punishing to smaller speakers due to huge dynamic swings, and bass lines that require a V8-like torque that many amplifiers simply can’t produce. Perhaps it was unfair to begin my listening with such a test, but the 5+ did an admirable job with "Aggressive Expansion," reproducing most of the drum line in the opening passages, but expectedly unable to cope with the lowest registers -- still, the track’s thumping rhythm remained intact. Sweeping, somber string interludes and high-frequency transients back in the soundstage were reproduced convincingly. A $399/pair speaker could well be expected to sound tinny at the top, and a bit murky or slow when handling the nuances of massed bows striking strings. While I was never in danger of being entirely transported into the performance, so to speak, the 5+’s silk-dome tweeter and Kevlar woofer resonated with more detail than any computer speaker offers, and were at least on a par with similarly priced speakers.

With Zimmer’s "A Little Push," crescendos increased in volume in a generally linear fashion, with a reasonably small amount of compression as the loudness approached levels of discomfort. Far more than 50Wpc and larger speakers are needed to reproduce the full dynamic range of orchestral music; the little Audioengines can hardly be faulted for having fallen short in this regard. 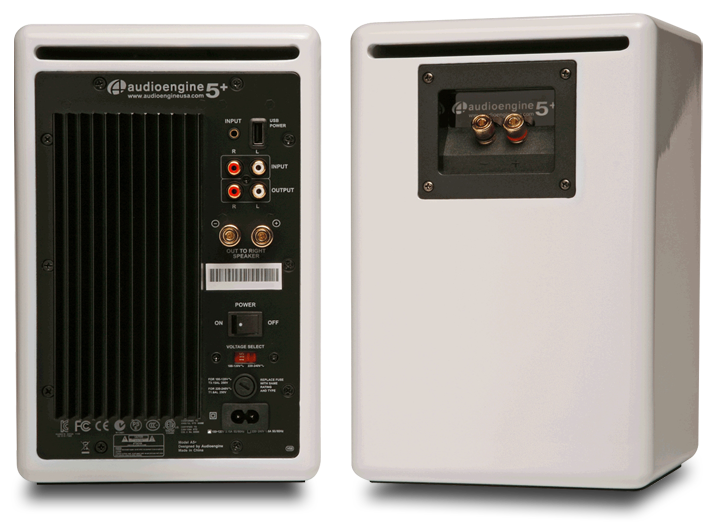 The Audioengines were more at home with more common fare, specifically Adele’s 21 (16/44.1 AIFF, XL Recordings). The North Londoner sounded lush and slightly round in "Set Fire to the Rain," highlighting the Kevlar woofer’s composure in remaining faithful to the original recording despite its modest abilities. The 20mm silk-dome tweeter integrated relatively smoothly with the 5" woofer, but I found it to be the more accomplished of the two drivers. As "He Won’t Go" begins, the highest piano notes, handled by the tweeter above the 2.6kHz crossover point, sounded more extended, airy, and light when compared to the woofer’s interpretation of the lower-frequency notes, which were rendered with less delicacy. I don’t mean to imply that the woofer is deficient, rather that the tweeter is a bit of an overachiever.

The standout aspect of the 5+s’ performance was their dimensionality. Stereo imaging and soundstaging aren’t something you expect for under $500 -- in many cases, it can be difficult enough to get sound that’s clear, clean, even, and reasonably extended at both ends of the audioband. With "The Hit," from James Horner’s Patriot Games soundtrack (16/44.1 AIFF, Milan), the 5+s painted a wide soundstage with a large drum front and center, flutes behind the left speaker, and assorted other instruments arrayed from left to right. All resonated in the recording space to surprising effect, creating the impression that I was actually hearing into a recording, rather than listening to a two-dimensional smattering of random instruments. Stereo imaging was also solid, with instruments occupying the space between the speakers with decent precision.

This piqued my interest. I decided to run a single 2m length of Nordost Blue Heaven LS speaker cable between the 5+s to hear how much that might improve the soundstaging. While cables really shouldn’t have any sonic personality, I’ve found that the Nordosts sound ever so lean, but allow for a properly expansive soundstage and superb rhythmic pace. At $350, a single Blue Heaven LS costs almost as much as a pair of Audioengines does; with my $1295 Benchmark DAC, these components are unlikely and unorthodox partners.

In juggling many considerations in its 5+, Audioengine has contrived to not drop one. As well executed as it is well designed, this attractive bookshelf speaker is a thoroughly practical product that worked, and worked well, practically right out of the box. You could spend the same amount of money on a pair of passive bookshelf speakers and perhaps get better sound. You could invest in an identically priced pair of active speakers and get similar sound. But the 5+ combines quality sound with an attractiveness and remote-controlled, multiple-input convenience that separates it from its competitors. Emphatically recommended.