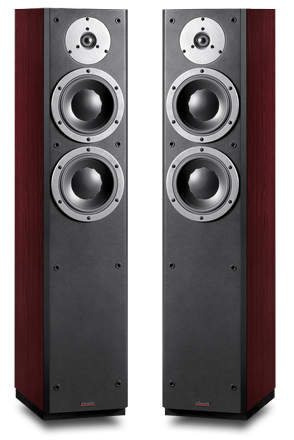 Proudly designed and manufactured in Denmark, the Dynaudio DM 3/7 is the sixth loudspeaker I’ve reviewed for the SoundStage! Network. Of these, only the Legacy Studio HD and the DM 3/7 are not made in China. That may not be statistically significant, but then again I haven’t been intentionally seeking Chinese-made products to review, so it does suggest a strong inclination among manufacturers. To applaud Dynaudio for bucking this trend (at least for now) is to understand that the cost savings from Chinese manufacture can be significant, should result in higher profits, and can be passed on to the consumer in the form of lower retail prices.

In view of this, the DM 3/7, at $2000 USD per pair, may seem to be at a disadvantage, and at least superficially, the speaker exhibits some obvious cost-saving measures. Want a real-wood veneer? Not available. Expect complicated, multiway crossovers and a multitude of drivers? Not here. How about a complex cabinet with discrete sections for each driver -- or, better yet, an exotic tweeter? Sorry. What you do get in the DM 3/7 is a practical loudspeaker from a company with decades of experience in design and manufacture, and a stellar reputation for excellent sound.

If prizes were given for Least Visually Offensive Speaker Design, then the members of Dynaudio’s DM line -- which includes the floorstander reviewed here, two bookshelf models, and a center-channel -- would be contenders. In describing the DM 3/7, the word that comes to mind is conventional: a well-constructed box of MDF with holes cut in it, in which are mounted woofers and tweeters, attached with wood screws. The DM 3/7 is a bass-reflex design: there’s a port on the rear baffle, where one can also find a single pair of binding posts. All speakers in the DM range are two-way designs, and the DM 3/7’s crossover is seemingly dead simple and . . . conventional. You can’t even go crazy on the finish: the only choices are simulated rosewood or black ash laminate. Even the driver arrangement is as per usual: a tweeter on top, in close proximity to the woofers. As I said: conventional.

But substitute proven for conventional and you get a much more accurate description of the DM models, which left me with the feeling that Dynaudio began with what has always worked in loudspeaker design, and refined it as much as modern production methods would permit. However, I’m sure that proven was no help to Dynaudio’s marketing department, who, presented with nothing in the way of patents or design breakthrough to brag about, had to make do with singing the praises of the thickness of the front baffle (1”) and the durability of the previously mentioned simulated wood laminate. This is the first speaker I’ve ever auditioned whose manufacturer has described it as suitable for “commercial installations in bars, shops or restaurants.” Then there are, of course, the drivers, which are Dynaudio’s very own designs, and which perpetuate the company’s faith in soft-dome tweeters and large-diameter voice-coils. There are also the plugs of soft foam: Dynaudio includes one for each speaker, to be placed in the bass-reflex port for those cases when there is too much room-induced bass boost, or when the speakers must be placed close to the front wall. (More about these plugs below.)

Four spikes screw into the bottom of each cabinet, to allow for adjustment and to prevent wobble. (Dynaudio does not suggest that the speakers be tilted back.) Small metal disks are provided to protect nice wooden floors like mine. The easily removed grille completely covers the front baffle, but at Dynaudio’s suggestion I left these off for optimized performance -- and anyway, the DM 3/7 looks good without its grille.

I was going to say some unkind things about the binding posts, which, the DM 3/7 being a European speaker through and through, are of the CE-approved variety: fully encased in plastic to resist short-circuiting, and therefore idiot-proof. They supposedly accept banana plugs (agreed) and bare wire (agreed), but spades? No way, no how -- unless getting only one of a spade’s two blades sort of clamped down is deemed adequate. But then I remembered my unfortunate recent experience with the aptly named Mordaunt-Short Mezzo 8, which went some way toward proving the collective wisdom of the European Community. Still, my enthusiasm for these devices is not high.

The DM 3/7 proved to be easy to position for optimal listening. Using Dynaudio’s clear setup guide, I ended up with the speakers about 6’ apart, 2' from the front wall, and slightly toed-in toward my listening chair, which was about 7’ back from a line bisecting the speakers.

The Dynaudios demonstrated a very flat and extended frequency response in my listening room. Using test tones and my RadioShack sound-level meter, I measured deviations of no more than ±7dB from 32Hz to 10kHz. When I used 1kHz as a baseline, the effect of the foam plugs was measurable from 50Hz down, and reduced the deep-bass output by 5dB at 32Hz. Without the plugs, the Dynaudios’ output was flat with the reference signal down to 32Hz. Not too shabby for a compact two-way speaker.

A strong point of the DM 3/7s was their ability to image in the horizontal and vertical planes. The solo-guitar riffs toward the end of “Night by Night,” from Steely Dan’s Pretzel Logic (LP, ABC D-808), were captured both dead center between the speakers and below the chorus of voices. While this exceptional imaging continued with nearly every track I threw at the Dynaudios, their soundstage wasn’t as wide as that thrown by the Mordaunt-Short Mezzo 8s, which I feel are, at $2495/pair, overachievers in this area. Also, unlike with the Mordaunt-Short, the ringing of the chimes in the Saturn movement of Holst’s The Planets, in the recording by Charles Dutoit and the Montreal Symphony (CD, London 417 553-2), was not nearly as extended in the highs through the DM 3/7. However, the Dynaudio demonstrated good bass performance with this track, reproducing the low-C organ-pedal note toward the end of the movement as a tonally distinct note.

Maureen McGovern’s Another Woman in Love (CD, CBS MK 42314) also showed off the DM 3/7s’ ability to accurately position sonic images, then hold those positions in space. In this recording of a singer accompanied by an acoustic piano (played by Mike Renzi), McGovern is positioned just to the left of the instrument. This orientation remained rock-solid throughout all 13 tracks without once wavering, no matter which notes were played or sung. The result was very satisfying, although the recording’s heavy-going sibilants were in no way forgiven by the Dynaudios, which honestly conveyed the sound of this 1985 digital recording.

The DM 3/7 also established a pleasing balance between Dusty Springfield and the backing band in “The Look of Love,” from the soundtrack to Casino Royale (CD, Varèse Sarabande 30200654092). Through other systems, the emphasis has been on Springfield’s voice. As reasonable as that may be, the more even balance of band and singer presented by the Dynaudio was very engaging, and took nothing away from Springfield while adding a fully fleshed-out rhythm section, including some gorgeously throbbing bass -- it all made for a very sexy performance. Meaty bass also made a dramatic and much-appreciated appearance about a quarter of the way into “Jet Pack,” from Jill Sobule’s Underdog Victorious (CD, Artemis 51563), when the band opens up. 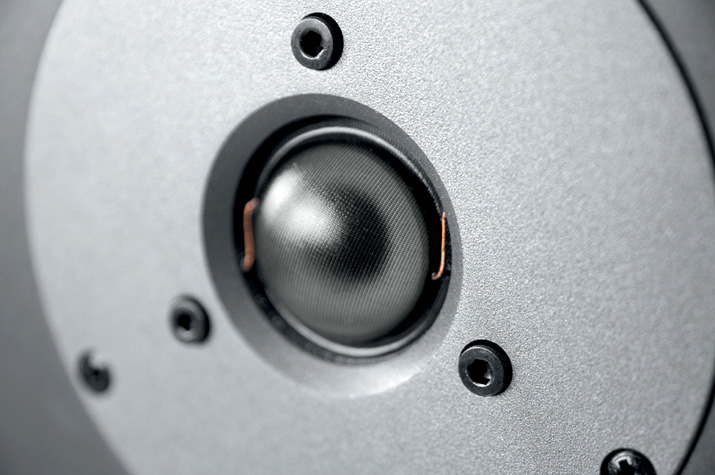 I keep returning to the DM 3/7s’ ability to image because they were so good at it. With “No One Mourns the Wicked,” from Wicked (CD, Decca B0001682-02), the Dynaudios let me precisely track the performers’ positions as they entered, then made their ways across the stage. I continued to reap the benefits of this with Glenn Gould’s playing in his 1981 recording of J.S. Bach’s Goldberg Variations, included with Gould’s mono recording of the work from 1955 in A State of Wonder (three CDs, Sony Classical/Legacy S3K 87703). This recording captures the great pianist and interpreter of Bach in full voice as he notoriously sings along with his playing. Although what are audible are, obviously, vocalizations captured by microphones placed to pick up the sound of the piano, some hi-fi systems present Gould’s voice almost as if a mike had been dedicated to capturing his “singing.” Through the Dynaudios, Gould’s voice was as easy to hear as I’ve heard with any top-quality system; the difference now was that his voice was plainly outside the sound of this recording’s intended subject: the piano. It wasn’t that the voice was lower in volume or less clear; instead, it now occupied a small, well-defined position in the soundscape that I perceived as being physically well away from that of the piano -- as if not Gould, but someone in the audience, were humming along. This made for a listening experience that worked for me, emotionally and intellectually.

The Dynaudio DM 3/7 ($2000/pair) competes well with other loudspeakers I’ve recently reviewed, including the MartinLogan Motion 12 ($1499.95/pair), the Mordaunt-Short Mezzo 8 ($2495/pair), and the Legacy Studio HD monitor ($1400/pair). Trade-offs abound in this price range; the challenge and fun of shopping within it is in finding something that best complements a buyer’s accompanying electronics, listening-room sonics and décor, and, most important, the music the buyer most often listens to. I think that, while more expensive than the MartinLogan or the Legacy Studio, the Dynaudio DM 3/7 is the better value. In my room it just covered more bases, and very well. However, while the DM 3/7 outperformed the Motion 12 in every area important to me, the Studio HD would still be a contender, if only for its spectacular treatment of the midrange/high treble. In terms of resolving power, I have yet to hear better for the price.

That leaves the Mordaunt-Short Mezzo 8, which I think is the Dynaudio’s closest competitor in this lot. The funny thing is that, for a much simpler and more conventional design, the DM 3/7 gives up very little to the Mezzo. In terms of treble extension and soundstage width, the Mezzo 8s had the upper hand, but I thought the Dynaudios handled the bass a bit more convincingly.

All in all, the DM 3/7 safely preserves and extends Dynaudio’s reputation for good-sounding speakers. The company remains a strong competitor, even at this lower end of the market.