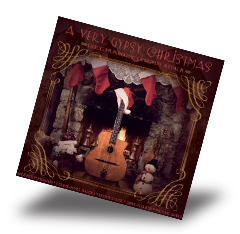 Doug Munro is a New York-based guitarist who has made 11 albums as leader and 60 as a sideman. For this holiday outing he chose to re-create one of his favorite sounds: that of Django Reinhardt and the Quintette du Hot Club de France. His coconspirators on all tracks are guitarist Ernie Pugliese and bassist Michael Goetz. Guests on various tracks are Cyrille-Aimée Daudel, vocals; Ken Peplowski, clarinet; and Howie Bujese, violin. The group swings its way, Reinhardt style, through 15 popular and religious tracks. Hewing to the style, they swing "We Three Kings" just as much as they do Leroy Anderson’s "Sleigh Ride." Though all the performances are enjoyable, the bar rises when Peplowski is featured. Just listen to his effortless improvising in "Sleigh Ride" or "Walking in a Winter Wonderland." The style comes to him as if he were born to it. Bujese’s violin is a little rough and ready, though always in tune and on the beat, while Daudel’s adroit singing adds color. The sound seems sort of flat, with a lack of soundstage depth -- sort of like movie-theater sonics -- but you’ll get so caught up in the swing of things that you probably won’t mind too much.