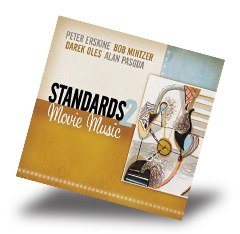 Drummer Peter Erskine says his record label, Fuzzy Music, is for musicians who "find themselves dipping into rich cultural pools of musical styles, beliefs and realities that do not fit into the large corporate record company way of thought or aesthetics." The label’s emphasis is straight jazz, accurately recorded. This is Erskine’s second collection of standards, and he’s joined on Standards 2 -- Movie Music by pianist Alan Pasqua, tenor saxophonist Bob Mintzer, and bassist Darek Oles. Erskine says in his liner notes that the songs are standards "in both the jazz and cinematic sense." This quartet finds plenty to chew on in the nine themes presented here, and each of the players gets a shot or two at arranging. Erskine’s take on "Tara’s Theme" (from Gone with the Wind) swings lightly, while Pasqua approaches "Somewhere" as a subtle ballad, giving Mintzer beautiful harmonic support during his solos. Mintzer takes "Night and Day" from bossa nova to bop, with space for a nice feature from Erskine. Oles’s impressionistic arrangement of "Rosemary’s Baby" is a model of restraint, and Pasqua responds to it with a solo that shows a unique understanding of space, allowing a sustained note or chord to carry the moment rather than filling every space. The recording is exemplary. Warm, subtly detailed, and spacious, Standards 2 -- Movie Music is a gift to both you and your hi-fi.