The title of Chris Stapleton’s new disc, Starting Over, suggests a new musical direction, but the 14 tracks on the album stay close to the singer’s roots in country, rock, and soul. His three previous discs established Stapleton’s commitment to his musical heritage, and Starting Over reaffirms his ability to handle a variety of genres easily and naturally.

Rather than signaling a shift in style, the title of the disc refers instead to the invitation expressed in Stapleton’s introductory liner notes—to take our cues from the healing power of music and leave our recent, rancorous times behind us. The title track is pure country, and begins with the lines, “Well the road rolls out like a welcome mat / To a better place than the one we're at.” Stapleton’s gruff voice is set off well by the sweet harmonies of his wife, Morgane Stapleton, and Benmont Tench’s Hammond organ adds a warm, churchy tone to the song.

Tench plays on a number of tunes on the disc and was, of course, a member of Tom Petty’s Heartbreakers. Fellow Heartbreaker Mike Campbell co-wrote and plays guitar on two of the tracks: “Watch You Burn,” a withering condemnation of gun violence, features a scorching guitar riff from Campbell. When the All Voices Choir joins the overdriven guitars near the end of the song, it sounds like the wrath of the Almighty raining down. Campbell’s guitar adds to the stomping rock’n’roll of “Arkansas,” and his solo is a reminder that he can help bring a tune’s message home in just a few well-played notes. 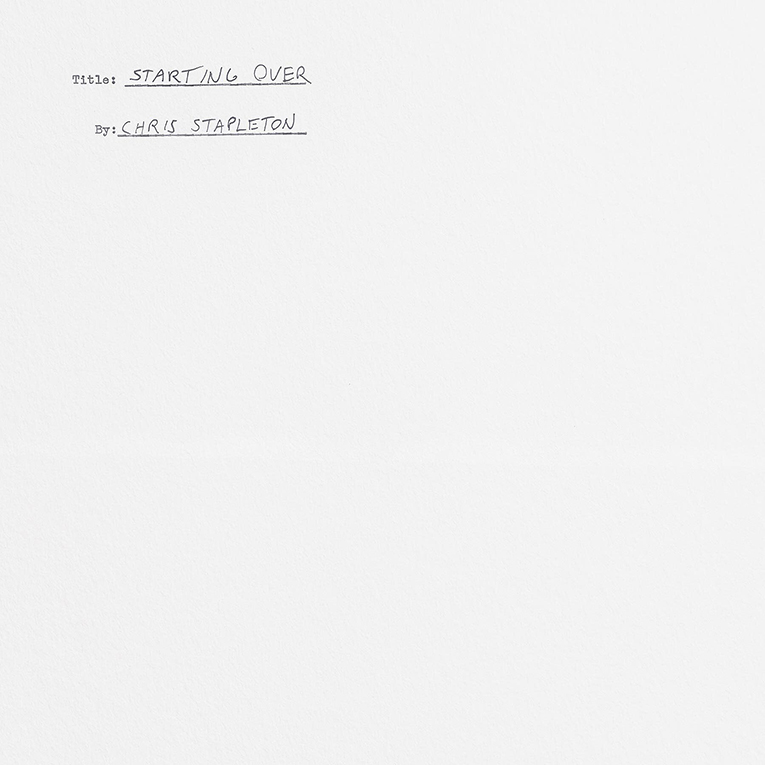 “Devil Always Made Me Think Twice” makes it clear that Stapleton doesn’t need outside help to prove his rock’n’roll bona fides, and his firm grasp of the form transforms Guy Clark’s “Worry B Gone” into a full-on country rocker. Paul Franklin’s singing pedal steel guitar gives the song heart, but Stapleton’s hard-driving Chuck Berry riff and brief but effective solo keep the song moving. Stapleton is a fine guitarist, and his searing guitar on the soulful country funk of “Whiskey Sunrise” is a high point of Starting Over.

Some of the disc’s stronger moments are also its quietest. Stapleton returns to Guy Clark with an interpretation of “Old Friends” that balances his calm recitation of the lyrics with beautifully sung choruses, which his wife’s harmonies, once again, aid greatly. A heartfelt cover of John Fogerty’s “Joy of My Life” benefits from Stapleton’s big voice, but the arrangement flows easily and calmly. And, yes, it’s probably a cliché for a country record to have a song about a dog, but “Maggie’s Song” is unforced, and these days a dog’s judgment-free company is worth celebrating.

Benmont Tench plays on eight tracks and adds a lot to the album, and it’s hard to imagine Stapleton’s music without Morgane Stapleton’s beautiful harmonies. But what grabbed my ears consistently was Stapleton’s rhythm section. Derek Mixon’s drumming is a model of intelligence and taste, and J.T. Cure’s bass lines are consistently melodic and inventive. 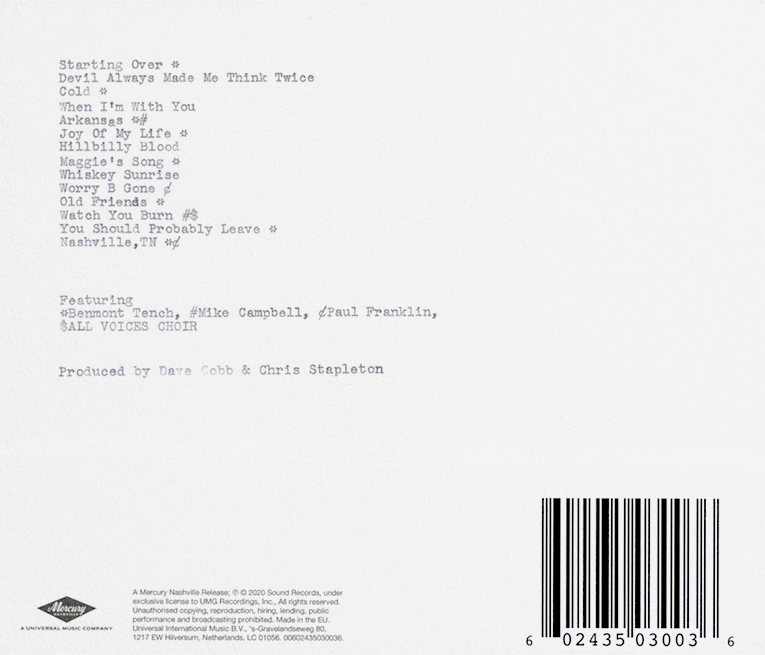 I would have preferred a recording that was less compressed and allowed, for example, more detail on the bass. On the quieter tunes, the sound is fine, but the rock tunes feel somewhat constricted. “Cold” could have used more space to let the strings make their mark, but I didn’t find the sound so distracting I missed the fact that “Cold” is a Southern-soul classic. Stapleton even recorded it in Alabama, at Muscle Shoals Sound Studios.

Stapleton’s been writing songs for even longer than he’s been recording them, and he closes Starting Over with a bittersweet song about the city where he made his name. “Nashville, TN” acknowledges how much he and his fellow country musicians owe to the Music City, while lamenting how far both the city and its music have veered from their roots. With luck, Stapleton will help push things back in the right direction.