Pro-Ject Audio Systems, an industry leader in turntable manufacture and design based in Vienna and with manufacturing facilities in the Czech Republic, offers a wide range of electronics, including phono stages. The Tube Box DS2 ($699 USD) is in the upper half of the company’s range of phono stages -- it’s a member of the DS2 line, which is just below the top, RS line, with a few features not included in the standard DS models or, below that, the S models.

In my experience of solid-state electronics, the differences in sound quality among various brands and models are subtle and difficult to hear. Pro-Ject’s outgoing Tube Box DS ($699) has two 12AX7 tubes in its output stage, and input impedance and capacitance that can be set by the user for moving-magnet (MM) cartridges, or set with a rotating dial for moving-coil (MC) cartridges. The DS2 takes this a step further by making these settings adjustable via front-panel pushbuttons, adding a gain pushbutton, and doubling the inputs and outputs to permit the simultaneous connection of a second turntable. 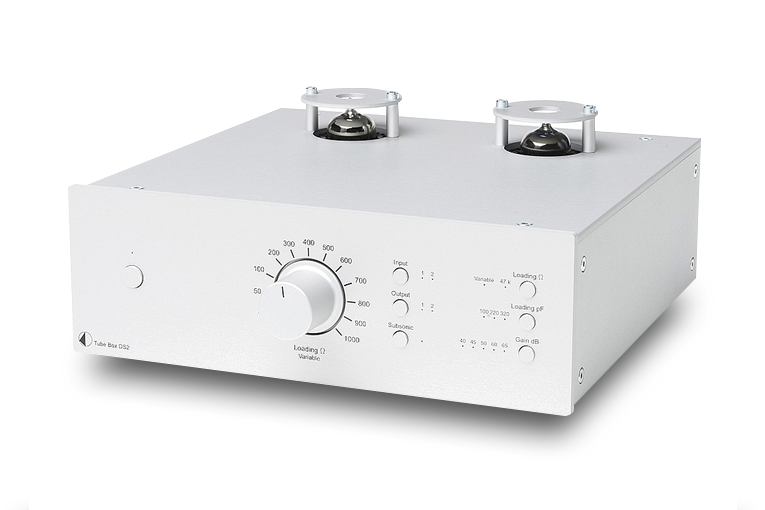 Also unlike the Tube Box DS, the DS2 is available in silver or black aluminum -- with, in either finish, wooden side panels (add $100) veneered in walnut, rosenut, or eucalyptus, to match the plinths of some of Pro-Ject’s higher-end turntables.

Looks are important to some; I wondered if the Tube Box DS2’s appearance would make it more than just another pretty faceplate.

What first popped out at me about the Pro-Ject is what pops out of the top of the Tube Box DS2 itself: the heads of those two 12AX7 tubes. (Most of the tubes’ height is hidden within the case.) Each tube has its own little cage -- really, not much more than a protective hat supported by two posts. If you want to swap out tubes, there’s not much to grab. I left the stock tubes where they were.

The rear panel’s RCA input jacks and outputs are aligned with the tube circuitry within, but even after connecting the DS2 correctly the first time and listening to it for several weeks, and now staring at it as I type this, I’m still confused by the layout. Rather than having complete sets of input and output jacks, the ins and outs for each channel are grouped together, and duplicated to accommodate a second turntable. The jacks’ positions are mirrored, or bilaterally symmetrical: all input sockets are on the outside, all output sockets on the inside. This means that the two leads of a phono cable must be unnecessarily spread out, while the output interconnects are needlessly close. Pro-Ject calls this “dual mono circuitry for optimized channel separation.” Essentially, the DS2 is two phono preamps in a single case. In any event, once the phono cables are connected, they’re easy to tell apart. 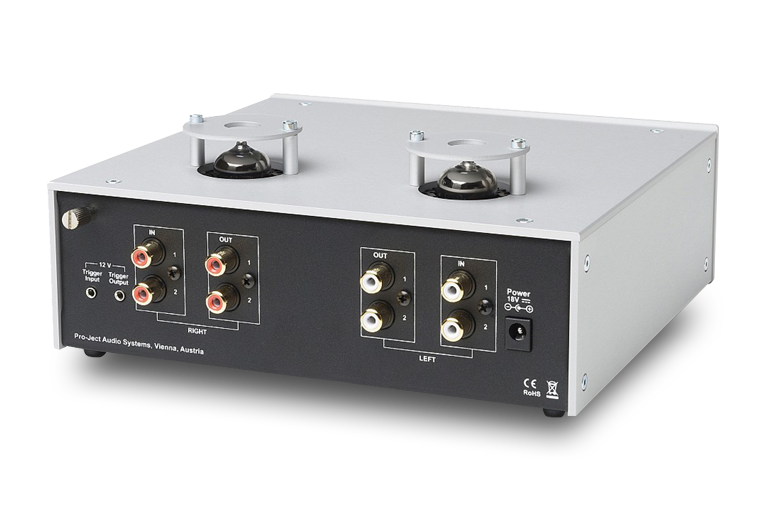 Though it can accept the phono cables of two turntables, the Tube Box DS2 has only a single ground screw, which must be shared. I’ve been assured that this is acceptable. There’s an input jack for the DS2’s 18V wall-wart power supply, and 12V triggered inputs and outputs for remote-controlled operation with other Pro-Ject products.

The DS2’s front panel is dominated by a central knob, for adjusting the input impedance of an MC cartridge from 10 to 1000 ohms. In standby, this panel is aglow with blue pinpoint lights, which indicate its settings; its small power light blinks for only a few moments as the unit warms up, then glows steadily. At the right of the front panel is a column of three buttons for setting, per RIAA standards, the input impedance (47k ohms or Variable), input capacitance (100, 220, or 320pF), and gain (40 to 65dB, in increments of 5dB), all labeled in tiny type. The brief but helpful instructions advise consumers to consult their cartridge’s instructions for the correct settings. I was happy to discover that my own MM cartridge, an Ortofon Red, was used as an example. To the left of these is another column of three buttons: Input 1 or 2, Output 1 or 2, and a Subsonic filter to deal with extreme bass and other unwanted rumbles. I pushed Subsonic on and off a few times but heard little effect in my system.

The Tube Box DS2 offers versatility: for listeners with one or two turntables, and/or who have different kinds of cartridges from any number of brands, and/or who might be inclined to tweak and adjust with each LP, or even while playing a single disc.

The Tube Box DS2 took the place of my solid-state NAD PP2i phono preamp ($169), which amplifies signals from my Pro-Ject Debut Carbon turntable with stock tonearm and Ortofon Red MM cartridge, then sends them along to an NAD C 325BEE integrated amplifier, which drives a pair of Elac Debut B6 speakers via 9’ runs of Element Cable Double Run speaker cable terminated with banana plugs.

It wasn’t until this time last year that I felt settled enough to get back into vinyl. I was regularly enjoying my collection of digital music, and had only recently discovered the wonders of streaming tunes from an online digital library. I admired and respected the new technology, but I didn’t love it.

None of my integrated amps had had a phono stage, so in addition to a turntable I had to buy a phono preamp, and over the past year, with my new NAD combination, I’ve revived my love affair with my LPs. But I had the nagging feeling that something was missing. I wasn’t getting anything from vinyl that I couldn’t get from CD. There was no sense of grandeur, no old-fashioned slam, and analog warmth remained elusive. I blamed my solid-state preamp and set my sights on the Tube Box DS2.

A preamplifier, whether it’s feeding a power amp or simply amplifying the signal from a cartridge, depends on balance. If it supplies too little gain, it can sound veiled, dim, and uncommitted. Too much gain, and the output is overmodulated, unstable, and obnoxious. But a preamp with sufficiently low impedance and the right amount of gain can produce sound that is stable, controllable, and, ultimately, rewarding and very enjoyable. As I got to know the Tube Box DS2, I discovered that its ability to microadjust gain and loading -- particularly moving the gain from 40 to 45 to 50dB and down again -- made it clear that it is a flexible and dynamic tool for drawing the richest and exciting sounds from my music. It affected everything that preceded and followed it in the audio chain. 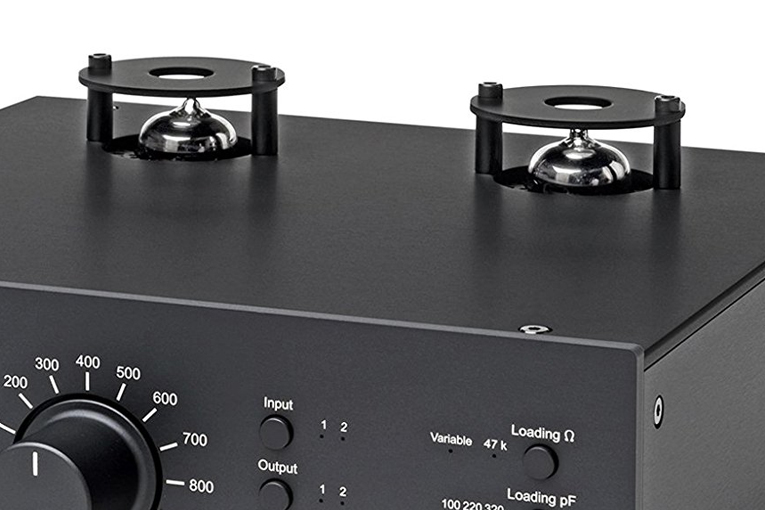 Listening to the Who tear into “How Many Friends,” from their By Numbers (LP, MCA 2161), delivered the jump factor I’d been hoping for from other, less ambitious solid-state phono preamps. The separation of instruments became clearer, and individual lines and patterns became easier to follow: the dexterity of John Entwistle’s fingers on his bass; Keith Moon’s rollicking drum fills; Pete Townshend’s stinging guitar riffs; and Roger Daltrey’s pained, muscular voice holding its own at the front of this maelstrom.

It was as if the DS2 wasn’t merely amplifying the music, but making it more present and imposing, imbuing it with a fuller tonality that was more involving, and less possible for me to relegate to the background. The opening notes of “Waiting on a Friend,” at the end of side 2 of the Rolling Stones’ Tattoo You (LP, Rolling Stones COC 16052), conveyed sonic sophistication, a relaxed quiet, and the beautiful resonance of the tones of Keith Richards’ gentle strumming. The solid-state phono preamps I’ve tried have all been quite competent -- but so are my CD player and iPod. The Tube Box DS2 expanded the possibilities of aural realism, improved musical imagery without sacrificing fine detail or lucidity. The music sounded lush but never flabby. The Pro-Ject excelled at contrasts: great big attacks and small accents, distance and intimacy, rhythmic flow and staccato breaks. 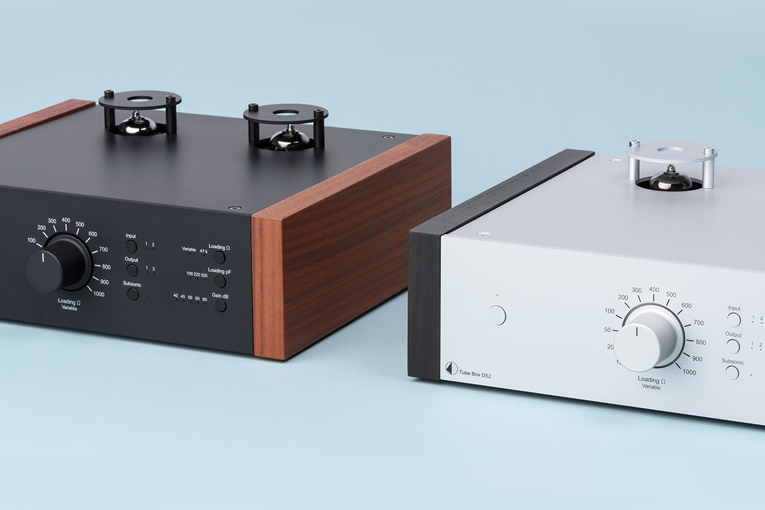 When I first hooked up the Tube Box DS2, I followed the instructions and set its impedance, capacitance, and gain for my Ortofon Red cartridge, as prescribed. I didn’t feel comfortable fooling around with the first two settings, but gain I could understand. Set to a gain of 40dB, the Tube Box DS2 sounded truthful, but I got the feeling that its capabilities had been stunted, even with tracks as lively and kinetic as “Human Being,” from the New York Dolls’ Too Much Too Soon (LP, Get On Down 54062), and “Ashtray Heart,” from Captain Beefheart’s Doc at the Radar Station (LP, Virgin 13148). In the former, Johnny Thunder’s guitar was suppressed, and in the latter, the Magic Band sounded attenuated. Pressing the Gain button to increase the DS2’s gain from 40 to 45dB began to bring the energy to the foreground. At 50dB, colors were more fully developed and textures became more palpable. But that wasn’t always the case. I would listen to a new record at 55dB, and the music would be too aggressive, the NAD C 325BEE would begin to distort, and the warm hum of tube-associated power would drift into a glassy buzz. The sound would begin to grate, and become fatiguing. At that point, it was reproducing more information than my system was designed to handle. It was that option, though, that made the DS2 special. At its recommended level, it was a (tube) caged animal, going about its business and maintaining a low profile. But when I inched up the gain, the DS2 could amplify as if that animal had been let loose in the wild. That’s when my system came alive and the sound was at its best, easily eclipsing in warmth and jump factor what I heard from NAD’s PP2i.

In the Tube Box DS2, Pro-Ject has engineered a versatile phono preamp that can be fine-tuned to suit any listener’s preference. It could play with enchanting transparency, and with bass reproduction that was an accurate representation of what was on the LP. Its soundstaging was exceptional, creating greater space behind and around instruments, and moving voices to the front of the stage. Frank Sinatra and Ella Fitzgerald sounded as if they were singing in my room. With a Beefheart or a Howlin’ Wolf, the results were force, forward propulsion, and a next-level quality that the highest caliber of singers possess but that audio electronics frequently don’t. It replaced solid-state aggression with tubed dynamic authority that let me play music louder than I usually would, and spurred me on to play the next record.

Thirty years ago, when vinyl was declared obsolete and phased out by the major record labels, electronics manufacturers began to produce amplification products without phono inputs. Now that vinyl is “back” -- it never went away -- listeners find themselves in need of outboard phono stages. Certainly, the DS2 can serve this utilitarian function. For that matter, so can the NAD PP2i, the Pro-Ject Phono Box S ($199), or any number of solid-state phono preamps. The DS2 elevated the performance of my otherwise modest components, like Michael Jordan making everyone around him better on the basketball court. It fulfills the needs of the day, and you won’t have to get a second phono stage if you get a second turntable, a ’table with an alternate cartridge, MM or MC, or even a turntable dedicated to 78s. As an affordable phono preamp, the Tube Box DS2 might not be the place for vinyl consumers to start, but it just might turn out to be where they finish.