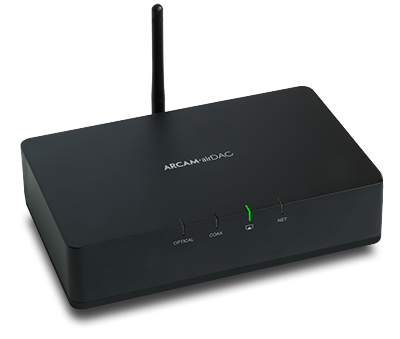 I remember when I saw my first outboard digital-to-analog converter. A wide-eyed teenager -- an audio neophyte, for sure -- I was visiting my first high-end audio store. The year was 1991. By that time, standalone DACs were already a hot commodity. They were one-half of a two-component solution (the other half being, of course, the CD transport) that comprised the audiophile’s version of the ultimate digital front end. With landmark products like the Mark Levinson No.30/31 combo paving the way, the future of disc-replay technology looked quite promising.

Who could’ve guessed that, not a quarter of a century later, DAC-transport combos -- never mind the entire category of component disc players -- would be almost obsolete? Ask any audiophile, and he’ll probably tell you that the catalyst behind this change can be described in three words: computer-based audio. With physical media quickly becoming a thing of the past, it seems there’s hardly any need for disc players or transports anymore.

Of course, all digital music still needs some form of D/A conversion, and these days one can find a DAC to suit just about every need. British outfit Arcam has been making outboard DACs since 1989, and the subject of this review, the airDAC, is one of their latest offerings in the category. With a price of only $699 USD, it’s also much easier on the pocketbook than most audiophile DACs.

With its refreshingly compact and smartly styled case, the airDAC is also quite easy on the eyes. The cast aluminum case feels smooth to the touch, and has a nice heft and solidity. The rubberized base also helps the DAC feel reassuringly stable on any surface.

As you’ve probably guessed by its name, the airDAC’s main selling point is its compatibility with Apple’s AirPlay wireless streaming technology. In its product literature, Arcam touts the airDAC as “the only audiophile quality AirPlay enabled device in the market.” Reading the airDAC’s website description, however, gives the impression that Arcam views it as an audiophile-approved way to wirelessly stream music from an iPhone, iPad, or other AirPlay-enabled device to a two-channel rig. The airDAC’s sparse input options seem to support this impression: In addition to its Ethernet and Wi-Fi connectivity, only two other inputs are included: one coaxial, one TosLink.

Surprisingly, the airDAC doesn’t have a USB input. Given its features and price, it’s likely that many potential airDAC customers have computers lacking coaxial or TosLink digital audio outputs; a USB input would therefore provide a fuss-free hookup option. My own Hewlett-Packard laptop lacks the aforementioned digital outs, which meant I had to use as an interface NuForce’s excellent U192S USB converter.

The airDAC does, however, have one unexpected but welcome feature: Universal Plug and Play (UPnP) streaming. This can be controlled by downloading Songbook, Arcam’s free iPhone/iPad app. Android users can choose from a variety of music-player apps, such as PlugPlayer or Bubble. Since UPnP is capable of greater resolution than AirPlay (24-bit/96kHz vs. 16/48), having UPnP onboard is a useful addition for those interested in streaming high-resolution music files. The sample rates for the other inputs are as follows: 192kHz, coaxial; 96kHz, TosLink; 48kHz, AirPlay. Lastly, the airDAC also features an S/PDIF output, should you need to route its signal to other components; you could also use it to add AirPlay to another outboard DAC.

Sparse inputs or not, setting up the Arcam airDAC was a breeze. I followed the quick-start guide’s instructions, powered up the airDAC, and it quickly latched on to my Wi-Fi network. My iPhone 5S identified the airDAC as being available as a ready and willing playback option. I connected my HP and MacBook Pro computers to the NuForce converter, then sent the NuForce’s output signal via coax to the airDAC. I performed all initial evaluations with this setup. Not including unpacking time, I’d gotten the airDAC ready to go in less than five minutes.

Before settling in for a listen, I let the airDAC burn in for around 40 hours. And what a good listen it was: The airDAC made music sound wonderfully warm yet lively and rhythmically nimble, with an overall evenhanded spectral balance. It was slightly restrained at the frequency extremes compared to more stratospherically priced gear, but its tonal character did a fine job of focusing on the music without any artificial or hyped-up sonic wizardry.

In fact, I didn’t notice one of the airDAC’s best qualities until well into my listening: Its accurate portrayal of lower-midrange warmth. On Alexandre Côté’s modern-jazz album Portraits d’Ici (24-bit/96kHz AIFF, Effendi), Bruno LaMarche’s baritone sax had a full, rounded tone, and John Roney’s piano possessed realistic weight and body, resonating with both power and nuance.

Turning to the lower frequencies, bass instruments via the airDAC sounded punchy, articulate, and well defined. The synth bass in “Paper Tiger,” taken from a WAV rip of Beck’s modern rock masterpiece, Sea Change (16/44.1 WAV, Geffen), sounded impactful and authoritative, filling the room with a good dose of subterranean force and physical impact. The Arcam always developed pleasingly rich, fulsome bass that was more than a few cuts above the quality one typically finds in a $700 DAC. 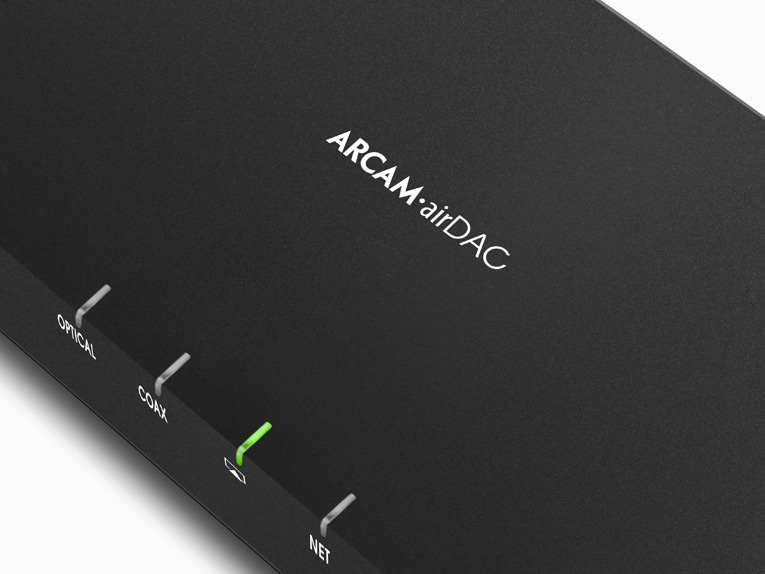 Once I shifted my focus to the region above those lovely lower mids, my ears locked on to what was perhaps the Arcam’s greatest attribute: its wide-open and naturally explicit midrange. In fact, the airDAC had one of the most coherent and engaging midranges I’ve heard from a reasonably priced DAC. For example, China Forbes’s voice in “Sunday Table,” from Pink Martini’s wonderful (and wonderfully recorded) Splendor in the Grass (320kbps MP3, Heinz), sounded realistically colorful, tonally natural, and timbrally complete. The airDAC did an outstanding job of conveying Forbes’s fine phrasing and enunciation; her control over sibilance and diphthongs also came through clearly and distinctly. That sort of detail, coupled to the aforementioned explicitness, made for effortless and captivating listening for hours on end.

In a quick listen, the airDAC didn’t seem terribly special in terms of imaging: Nothing jumped out at me or grabbed my attention. But with the right recordings, the airDAC had an uncanny ability to place the performance right in front of me. Nowhere was this more evident than with a download of Alisa Weilerstein’s wonderfully vibrant performance of Dvorák’s Cello Concerto in B Minor, with conductor Jiri Belohlávek (24/96 AIFF, Decca). The Arcam did a fine job of reproducing both the acoustic of the recording venue, Prague’s Rudolfinum, and the Czech Philharmonic’s size and scale. Within that acoustic, Weilerstein’s cello had excellent focus, depth, and projection, while set against an expansive yet naturally rendered soundstage whose layering and image delineation were among the best I’ve heard at the price.

So the airDAC sounded great wired -- how about wireless? While I’ve occasionally enjoyed AirPlay’s convenience, I’ve rarely found it musically engaging -- it always lacked too much dynamics and refinement. So I was curious to hear if the airDAC’s AirPlay processing could live up to Arcam’s claim of “audiophile quality.”

I cued up various hi-rez and “Red Book” music files on my iPhone 4, using as music player Arcam’s Songbook. It wasn’t long before the airDAC allayed any fears I may have had concerning AirPlay’s ability to deliver the musical goods: Weilerstein’s recording of the Dvorák concerto sounded more forceful, dynamic, and harmonically complete than it had with other AirPlay systems. And with the aforementioned Côté album, cymbals in particular rang with more complete sizzle and harmonic decay when done the Arcam way. Finally, here was AirPlay performance I could enjoy over the long haul. True, it was still no match for a wired connection, but as a convenience tool, mission accomplished for Arcam: the airDAC need make no excuses for its AirPlay performance.

To get a handle on how the airDAC fared against the competition, I compared it with Antelope Audio’s Zodiac DAC ($1895). I found the Zodiac to offer great value for the money when I reviewed it, combining in a single case a class-leading D/A converter, a high-quality volume control, and a competitive headphone amp. I stuck with using both DACs through their coaxial inputs, for the highest resolution and most direct comparisons.

As I listened to Joshua Redman’s Back East (16/44.1 WAV, Nonesuch), the Zodiac made his horn sound relaxed, refined, and oh, so smooth. Voices on Stile Antico’s Music for Compline (16/44.1 AIFF, Harmonia Mundi) also sounded lucid, clear, and timbrally rich, with remarkably lifelike in-room presence. On the whole, midrange sounds were slightly recessed, giving music a more laid-back perspective. And with imaging in particular, the Zodiac was first rate: It had some of the best instrumental separation and most holographic imaging I’ve yet heard from a DAC costing less than $2000, vividly presenting, with plenty of depth and scale, soundstages populated by deep, three-dimensional images. 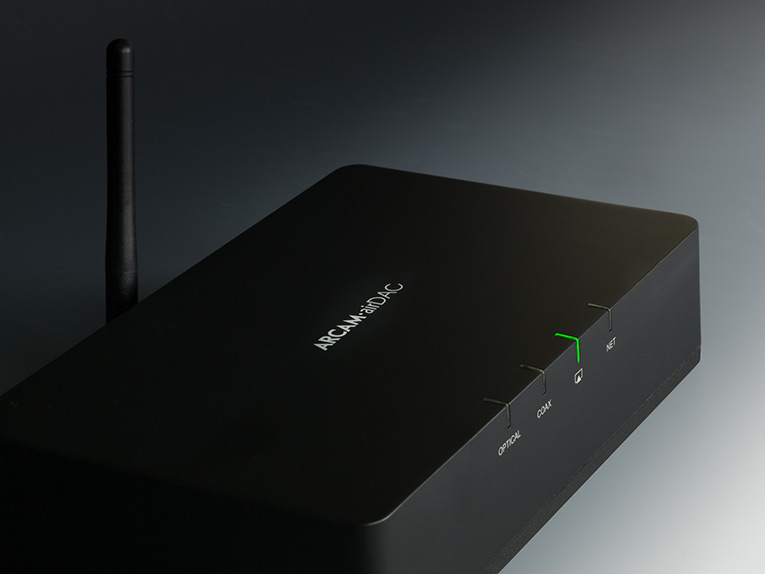 Switching to the airDAC yielded unexpected results. Redman’s sax now had more realistic bite without sounding the least bit etched, hard, or glassy; rhythm instruments, such as drumsticks on snares, cracked with greater impact and precision; and cymbals sparkled with more natural attack, brilliance, and shimmer. The voices on Music for Compline also sounded more vibrant and forward in the mix, with better upper-midrange clarity and articulation.

When it came to bass, it was no contest: The Arcam airDAC noticeably bettered the Zodiac, in terms of both quality and quantity. For example, the deep, pulsating synth bass in “Limit to Your Love,” from James Blake’s eponymous debut album (16/44.1 AIFF, Polydor/Universal), had greater weight, impact, and authority through the Arcam, and built a more solid foundation for the music.

It was that bass quality, coupled to its unparalleled rhythmic drive, that set the airDAC apart from the Antelope. With Grizzly Bear’s Veckatimest (16/44.1 AIFF, Warp), the Arcam charged full steam ahead with deep, taut bass and startling dynamic impact, while delivering both with better pace, propulsion, and momentum than the Antelope. Ditto with the Joshua Redman album, which sounded more exciting and alive through the Arcam. While the Antelope made for a tonally richer sound, the Arcam was more alive and exciting to listen to. The airDAC got the rhythm and timing right in a way that few digital components can, let alone one costing $700.

Both are excellent DACs; depending on your tastes, a strong case can be made for either. Which you’ll prefer may well come down to the type of music you listen to and how you like to hear it. For purely acoustic music that’s less dependent on rhythmic agility, there’s no question that the Antelope still holds an edge in terms of refinement and tonality. But for the most musically engaging performance over a wide range of music, I preferred the Arcam airDAC.

When I first installed the Arcam airDAC in my system, I wasn’t sure what to expect. At first it didn’t sound terribly impressive, but its capabilities soon made themselves known. The airDAC is a music maker through and through -- one that offers a huge slice of audiophile sound at a real-world price. It does so without playing favorites in terms of musical genre or listener preference, delivering the musical goods in the most engaging way it can.

Of course, its sound quality can be bettered, especially by the really good megabuck stuff. And I do wish it had at least one more input, preferably a good-quality USB. But you’d be hard-pressed to find a DAC that’s more musically compelling for anywhere near $700. That it can stand toe to toe with -- and even exceed, in some areas -- the excellent Antelope Zodiac DAC is an impressive feat.

The Arcam airDAC is a budget-priced component with high-end musical chops. I confidently recommend it to you if you’re looking for a sensible way of getting the most from your digital music files. I’m willing to bet that, once you experience its charms, you won’t be able to part with it. I know I couldn’t: I bought the airDAC’s non-AirPlay brother, the Arcam irDAC.